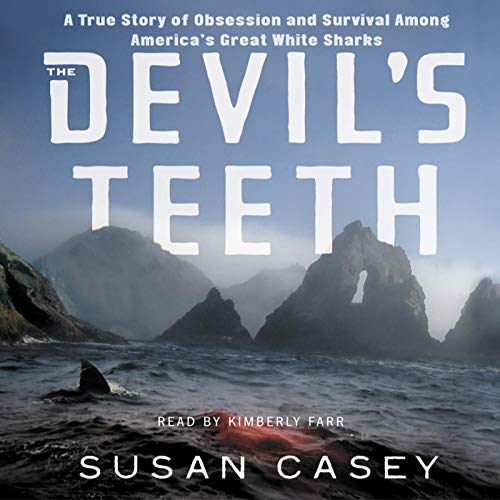 Written by: Susan Casey
Narrated by: Kimberly Farr
Try for $0.00

Travel 30 miles north, south, or east of San Francisco city hall and you'll be engulfed in a landscape of thick traffic, fast enterprise, and $6 cappuccinos. Venture 30 miles due west, however, and you will find yourself on what is virtually another planet: a spooky cluster of rocky islands called the Farallones.

Journalist Susan Casey was in her living room when she first glimpsed this strange place and its resident sharks, their dark fins swirling around a tiny boat in a documentary. These great whites were the alphas among alphas, the narrator said, some of them topping 18 feet in length, and each fall they congregated here off the northern California coast. That so many of these magnificent and elusive animals lived in the 415 area code, crisscrossing each other under the surface like jets stacked in a holding pattern, seemed stunningly improbable and irresistible. Casey knew she had to see them for herself.

Within a matter of months she was in a 17-foot Boston Whaler, being hoisted up a cliff to face onto the barren surface of Southeast Farallon Island, part of the group known to 19th-century sailors as the "Devil's Teeth". There she joined the two biologists who study the sharks, bunking down in the island's one habitable building, a haunted, 120-year-old house spackled with lichen and gull guano. Less than 48 hours later she had her first encounter with the famous, terrifying jaws and was instantly hooked. Curiosity yielded to obsession, and when the opportunity arose to return for a longer stay she jumped at it. But as Casey readied herself for shark season, she had no way of preparing for what she would find among the dangerous, forgotten islands.

The Devil's Teeth offers a rare glimpse into the lives of nature's most mysterious predators, and of those who follow them. Here is a vivid dispatch from an otherworldly outpost, a story of crossing the boundary between society and an untamed place where humans are neither wanted nor needed.

What listeners say about The Devil's Teeth

If you can stand the reader's voice for the whole book, then you may like something in here.
Her voice is the one from Ender's Game. Completely nonplused by anything. Very monotone.
Someone with a bit more energy would have made it a little better.... a little.
Things that annoyed me:
1) The adoration of the the two guys who run the unit at the Farallone Islands.
The guys are Gods in her eyes, and know Alll.....

2)The descriptions of everything are overly flowery. WAY, over flowery

3) After all the bashing, on Yuppies who pay money to see the sharks, are we then supposed to sympathize with her for sneaking, or bending/ breaking rules to go look at sharks she has no more right to see, then anyone else?

4)After spending a chapter on how many boat wrecks, and how treacherous the water, and the weather, is around the islands, and how many people have died: She rents a boat, to go out there without the slightest idea of how to do anything on a boat. Plans to stay for 5 weeks, and says "How hard could it Be?" ... well, you just TOLD Us, how hard!

5)Also the word "shark" is used in this book, more to grab your interest, then anything else. There is a lot about birds, and the islands, and boating, and ghosts, and about weather, and eating, and her dreams, and fears. I think there are about 6 sentences per chapter, about sharks, or use the word "shark" in it (as in: "You see over there, where there would normally be shark attacks? That is where the sea lions mate. The sea lion...bla bla bla"). I feel it was a publisher's judgment to put the word "shark" in the title, to get people to notice the book. I doubt people would buy this book, if they thought it was just a book about the islands. It's like telling the history of the music, then calling the book "Elvis. The king of Rock".

The biology was really interesting. But the multiple mistakes describing optics (It was halos not spectre of the brocken) make me wonder how accurate the rest of it was.
She tends to put down suburban life a lot, but then compares the natural world to suburban objects. Very annoying.
And she exagerates her hardships. If she really thinks that the farallons has the worst weather in the world, she should spend February in Greenland.
But I'm glad I read it for the sharks and descriptions.

The Devil's Teeth is an amazing and fascinating look at one of nature's most fearsome predators -- the great white shark. After reading the excerpt of this book in a recent issue of Sports Illustrated, I knew this would be a captivating listen. A very well-written book that is filled with lots of information and anecdotes that may have been known in the California diving community (and maybe in certain segments of the scientific community), but certainly were not widely known elsewhere. Readers may have nightmares about sharks for weeks after hearing this book ... and they certainly will think twice about scuba diving off the Northern California coast.

I enjoyed the overall story. I wish there had been more direction, but what can you do with a story that’s being recounted by the author. It’s definitely an interesting listen, but I felt that it was a bit slow with no real climax. Which could again be attributed to the fact it’s a true story. If you like learning about new places and stepping into an authors shoes, then this book might be just right for you.

Not enough shark action for me

This was entertaining, but was more about misfortune while on a journalist's quest. Good history of the Farallon Islands is included, but I expected more hair-raising encounters with the Great Whites.

I found this book a mixed bag. Events like the egg wars gave new flavor to the region and related a interesting history not found in standard text books. I also enjoyed the ecology of the islands, especially the bird colonies. What left me a little cold was the behavior of the author in researching the story and her experiences, such as they were, with shark observation. It would have been a more interesting story with her not in it.

This has to be one of the best non-fiction books I have listened to. The Devil's Teeth by Susan Casey is a story of unexplicable passion of a writer for her subject - great white sharks. Casey provides insight into her passion as well into the mysterious lives of the earth's largest carnivore. Her story is full of science and passion. Less than 100 miles off of the coast of San Francisco lie The Farallones - rocky crags that jut from the Pacific. These devil's teeth are the home to a breed of biologists whose passions are what most humans would consider evil - killer sharks. Kimberly Farr does a great job in reading, although sometimes a little too much emphasis is placed on some corney attempts at humor. What a subject (sharks). What a setting (the Farallones). What a read!

While this book got a bit slow at times, I was fascinated by most of the story, and I finished it wanting more. I loved the history of the Farralon Islands and the shark research tales. The reader is wonderful. I highly recommend this to shark buffs and Californian history enthusiasts alike.

Didn't want to put it down. Entertaining and informative. Reader has a great voice.