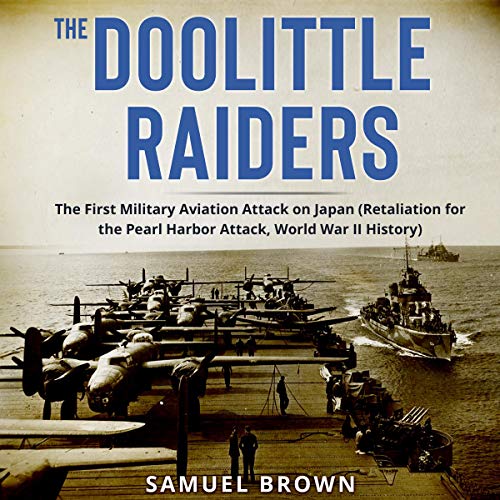 The Doolittle Raiders: The First Military Aviation Attack on Japan

Written by: Samuel Brown
Narrated by: Mark Wheeler
Try for $0.00

December 7, 1941. The Japanese forces attacked Pearl Harbor and the United States was sucked into World War II. The nation was furious, and the public demanded revenge. Back home, Colonel James Doolittle of the United States Airforce was tasked with organizing a raid on Japan. On April 18, 1942, 16 B-25B Mitchell bombers were flown from the aircraft carrier USS Hornet off the coast of Japan. The daring mission was successful in creating fear within the hearts of the enemy and won support for the military back home. This is the story of The Doolittle Raid.

The USS Hornet was supported by the USS Enterprise, four cruisers, and eight destroyers. The bombers successfully took off and were provided cover by the supporting ships. They split into five formations, each attacking a different region.

Running low on fuel after completing their mission, one aircraft landed in Vladivostock, Russia while the other 15 landed in China. There, eight crew members were captured by the Japanese of which three were later executed. Come and find out about one of the most striking missions by the US Airforce on foreign soil.

Here’s a preview of what you’ll discover in this audio book:

What listeners say about The Doolittle Raiders: The First Military Aviation Attack on Japan

Poorly written for such a huge and fabulous event.
The book could have been so much better.