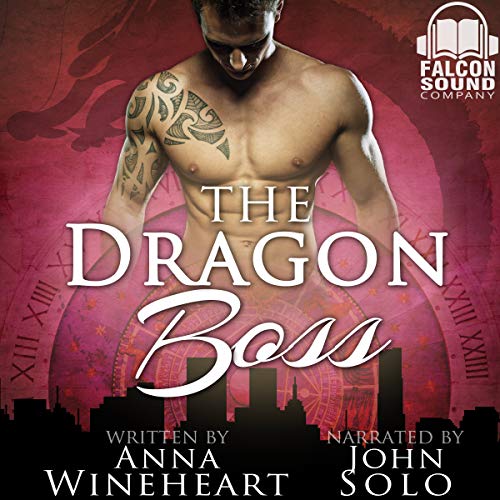 Written by: Anna Wineheart
Narrated by: John Solo
Try for $0.00

What happens when you send an accidental dick pic with your resume?

On the run from dark-web criminals, Lucian Bolt has given up on a permanent safe place - all he needs is a temporary one, so he can earn some quick cash and run again. Better to flee than linger in the truth: Because of his electronic whispering abilities, his family has been murdered. A person like him doesn't deserve happiness.

As the boss of Whole Fish Seafoods, Knox has everything - except a family. Fifty years ago, wolf-shifters murdered his mate and child. Believing himself a failure, Knox has sworn off taking another mate...until he meets the job applicant that stumbles into his office.

Lucian smells like wolves. Suspicious, Knox frisks him and plants his seed in Lucian. Only to find out a week later that Lucian's not the non-magic human he claimed to be. And that Lucian is now pregnant... with a dragon child.

With Knox, Lucian glimpses what a happy future could be like. And with Lucian, Knox has someone to protect again. As the sparks between them grow, and as the dark tendrils of their pasts coil ever closer, can Lucian and Knox find their way to a future together?

The Dragon Boss is a stand-alone dragon-shifter novel with sentient shopping carts, a kraken, and a dragon who will not fail his mate. No cheating, no cliff-hangers, but there definitely is a happily ever after.

What listeners say about The Dragon Boss

It wasn't enough that I own this book in e-book and paperback form, when the invite to receive an arc of the audio version came about I jumped at the chance. IT ROCKED! John Solo does such a great job with the voices and personalities of the characters and made a great book even better.

Oh what a ride

What a ride for Lucien and Knox. It’s a non stop roller coaster ride for these two. Lucien is such a sweet guy and he has been through so much in his life. Such pain and so much hardship for this young man. I feel so much for him. Knox has known pain and loss just as much as he has. The two of them are so good for each other and healing the pain that they both feel and the holes that are in their lives. I love the job that John did with this story and the way that they were brought to life.

I could not even finish listening to this story. I am an staunch fan of the paranormal/shifter, alpha, omega stories, and have listened to many. This was absolutely the worst. I have never encountered such a weak, and whiny character as I did in Lucian. It was so disturbing and horrible, that I could not finish listening to it. I mean, in every situation he whined about it. ( Such a WEAK character) It made me cringe. Im not sure if I'll take a chance and listen to the next installment of this series, but, this first one, I do not recommend.👎

the book started off okay. it started dragging really slowly. the character says very weak and wimpy especially for a dragon. I just expected there to be more substance I guess or I'm not just be so lame.

Lucien is fragile since the murder of his family and blames himself. Knox has little trust for anyone since the murder of his mate. There is an immediate attraction, with Lucien not wanting Knox in danger and Knox not wanting to trust Lucien. Their first encounter is weird, almost wrong. Lucien's belief he is to blame for not working for a criminal is wrong, but no one points that out. Knox is old and wise but is awfully blind to the truth happening around him; both with Lucien and this criminal element. Too much time goes by with Knox still blaming Lucien. I enjoyed the narrator's characterization. I voluntarily reviewed a copy of this book.

How could one picture change two lives so much? When Lucian sees the picture that he sends off with his resume to Knox he cannot believe the mistake that he has made. When the two meet face to face the chaos begins. Both men are running from their pasts and Lucian is hiding a secret that puts him and everyone around him in danger.

I enjoyed Knox and Lucian’s story. It was nice to see their relationship take shape. The two men must find a away to trust each other if they want to get past the pain of their lives and work towards a future. The author weaves a beautiful love story with characters full of emotion. Their story moves at a nice pace and keeps your attention all the way through to the end. Narrator John Solo does a great job of bringing the characters to life and I was quickly lost in their world.

This book is pure magic!!! Through the author's imagination and words I was completely transported into an alternate universe with some uniquely beautiful souls and some so evil I cringed at the mention of their presence and what was sure to follow. I became invested in the characters and their outcomes. The fight scene was so intense that I felt like I was there and it had me on the edge of my seat. Walking the love circle made me emotional and teary. This amazing world building was emotion packed with heat,humor, and drama. It is an experience not to be missed. I highly recommend it. I voluntarily listened to a free copy of this and am giving an honest review. The narrator did an excellent job bringing the characters and story to life.

This book was a very fun read. I would recommend it to anyone in the mood for a fast paced listen.

i found this book a very enjoyable listen. well rounded characters and story line. looking forward to the next book in this series.

Great narrator for this story, loved it!

I read this story when it first came out, and I was just so totally captivated by the world that Anna Wineheart created, where things made out of metal come to life, where dogs fart and burp ice, where magic users and shifters all live together, and where you can burp fire when pregnant with a dragon's baby.

I want to say that this was the first mpreg from Anna Wineheart, but I can't exactly remember. She's really created a very unique world here, and I loved reading about it. And hearing John Solo narrate really brought the story to life. His voices are always spot on, and I thought he did a great job for Lucian and Knox, and Octogod.

HIGHLY recommend this in either audio or book format, if you are a fan of mpreg, dragon shifters, some angst, some self-sacrificing idiotic moments, and some steam and romance, and emotions!