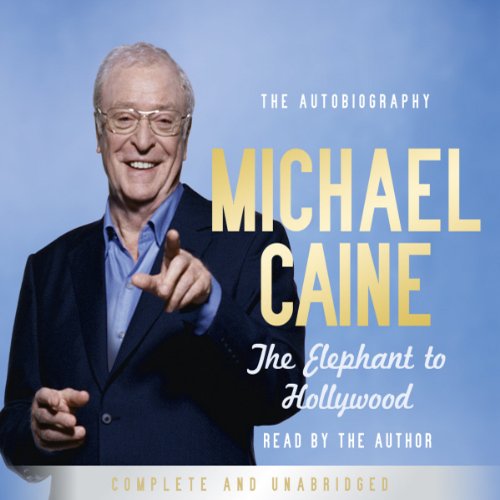 The Elephant to Hollywood

Sir Michael Caine is loved not just for his many films, but for his warmth, honesty, and humour in describing every aspect of his life from his humble South London beginnings to performing alongside the greatest Hollywood actors of the day. As Sheridan Morley wrote about his first book: 'It has taken two decades to get a man back on (Niven's) Moon, and the man is Michael Caine.'

In this long-awaited, and self-penned, new autobiography, he tells us not only the events of the almost 20 years since his last book – which include his Oscar winning film Cider House Rules, as well as the box-office busting Batman - but also many great eye-opening and entertaining stories from his life and career, shedding light on the real Hollywood and the years he struggled to get there.

With all the charm and wit we know him for, this audiobook is set to become a new classic to rank alongside Niven's Moon's a Balloon.

What listeners say about The Elephant to Hollywood

What made the experience of listening to The Elephant to Hollywood the most enjoyable?

I found Michael Caine to be a surprisingly candid and open author. The book is touching and almost sweet. I am amazed by his sense of gratitude for his apparent 'good fortune' and his humility regarding his ability as an actor.

I particularly enjoyed Michael recounting Christmases and why they are so special to him, His need for family closeness.

Have you listened to any of Michael Caine’s other performances before? How does this one compare?

My first encounter with Michael Caine outside of his acting.

Due to the Author being the narrator, this book makes you feel like you are sharing a 'real' person's life.

Well written and well narrated. I certainly would read any other works that are narrated by Michael Caine

The Legend that is Morris Micklewhite!

If you could sum up The Elephant to Hollywood in three words, what would they be?

What does Michael Caine bring to the story that you wouldn’t experience if you just read the book?

The unique character behind the story. I think all biographies should be read by their subjects, it adds another dimension that might have been lost being read by someone else

The story about his father passing away

Absolutely loved it. Listened to it on an 18 hour drive to Italy, played it going, and just had to play it again on the way back. Not once did we get bored or weren't fully immersed in the story. There was silence in the car for the whole journey! :)

This narration is really fresh and enjoyable. I love when Michael Caine chuckles and sometimes practically laughs out loud. You feel like you are in a pub with him and listening to him reminisce about the old days. Thoroughly entertaining!

Narrated by Michael himself, the book was a joy to listen to. It gives you a great insight not only to Mr. Caines' ascent from his humble beginnings, but also to the inner workings of Hollywood and its denizens. Bravo!

What did you love best about The Elephant to Hollywood?

I first read Michael Caine's biography What's It All About? which tracks Caine's upbringing from the working class to Hollywood. That was quite a while ago, and I was glad to update myself with his spoken version. And who better to tell Michael Caine's story than Michael Caine? It's a long story but he's had an amazingly long career - it's personal enough and a testament to his determination to make it in spite of the odds. Mostly enjoyable. You can't fault the non-events that are inevitable in an autobiography like this....PS I'm going to miss Sir Michael Caine when he's gone. They don't make stars like him anymore.

There is only one leading man here.

Not Many People Know That...

I thought I knew Sir Michael Caine. I love and hate some of his movies. I think he is a loveable guy and great character. As he has got older I think his work gets better but this book shows how little I knew about the man. I found out his favourite movies are mine, well besides Alfie, which I have never seen but it made him. He has worked hard for his career and had a lot of luck. He has had downs and hard times, which come out nicely in this book. What really makes this book is Michael narrating it. His laugh is so funny. Would love to have a dinner with the man, but I don't see that happening, we move in different circles. Love the book, can't say you will understand or know Michael Caine any better but what a trip down memory lane. His accent is so comforting and his story telling captivating. I know he is getting on in age, but please stick around and make more movies, even write more books.
Love your work.

Where does The Elephant to Hollywood rank among all the audiobooks you’ve listened to so far?

Among the good one but not the best

When Michael Caine introduce his racist neighbor to his Indian wife!

Well, we are talking of Michael Caine! He can't perform badly. However, given his status, I was expecting something better. He is singularly bad at telling jokes! And he is obviously stage laughing afterward. Disappointing.

When he discovers that his mother kept hidden his half-brother for years.

What made the experience of listening to The Elephant to Hollywood the most enjoyable?

Michael Caine and his relaxed and sometimes funny reading of the book. Enjoying his memories whilst reading it makes it all the more enjoyable for the listener.

Brilliant reading and best told by the man himself. Emotions across the board are reflected in his reading.

An Audible must listen for anyone who likes Michael Caine or biographies. Or even both! :)

Would you consider the audio edition of The Elephant to Hollywood to be better than the print version?

The whole thing is a big picture

Live it as best you can

It's Michael's life as written and read by Michael. Loved it

The narration was great. Every autobiography should be read by the author. I love it when he laughs out loud sometimes when he retells a story or remembers something.