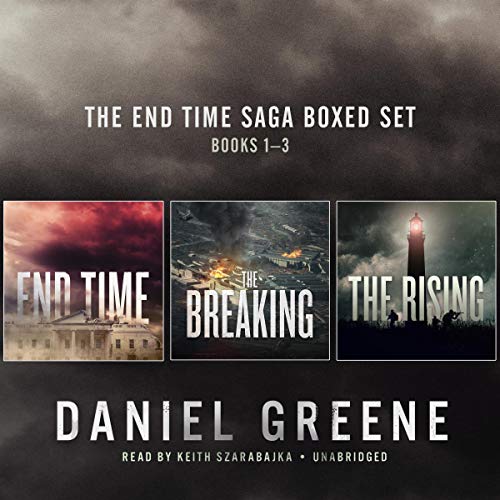 Written by: Daniel Greene
Narrated by: Keith Szarabajka
Try for $0.00

The first three novels and a bonus short story of the End Time Saga in one boxed set. Almost 40 hours of thrilling postapocalyptic viral outbreak fiction!

In the dark primal jungles of the Congo River Basin, a deadly microbe is mutating at breakneck speed. Before the world can react, a deadly viral outbreak is ravaging the local populations. A team of counterterrorism agents is sent to retrieve a doctor in the collapsing nation...but this is just the knock on the door for the end of the world.

Over the course of a few months, along with the rest of the world, America collapses piece by piece, turning the nation into a grim wasteland where the chances for survival are slim. Watch your six with counterterrorism agents as they try to keep a doctor and each other alive. Join a team of CDC doctors as they race to find a cure and the virus picks them off one by one.

Scramble with a retired Air Force colonel thrust into the command of a Special Forces team trying to prop up a dying government. Flee before a delusional pastor and his followers as they burn their way across the land. Rebel with a rural town about to become the epicenter of a resistance movement and the return of a farmer’s daughter, propelled into a position to lead them.

Who will rise? Who will fall? The only certainty is the dead will rule over all. Enter: the End Time Saga.

Books included in this boxed set:

This was more of a war survival series than an earth crisis survival tale. The characters were underdeveloped, and the storyline was one, long "I must protect my woman and fight for my country" litany. Much more of a "graphic novel" than I expected. For those who enjoyed Justin Cronin and other books of the dystopian genre, don't bother with this one.

I am not done reading this book and felt compelled to write a review. I found this series without any suggestions by Audible.
I sure am glad I did. First off, this series is well written, narration is awesome. Edge of your seat and action packed. Characters are well suited to the story from the beginning. I am impressed and very much look forward to the next chapters. It's a thrill ride!

How in the world does this rate so many good rvws?

Let me start off by stating that I love action packed stories... I also love zombie and apocalypse stories going back to the days of “I Am Legend”... That being said, i have no idea on earth why this has so many five star reviews!? I can understand how people claim, “well... it was worth a credit”... however.. if that is the threshold for a story being good, we are all getting sloppy and bored with our commutes/walks etc... This is far from an action packed story. In fact, i am exactly SEVEN hours into the story and the main characters are JUST coming to realize that they are dealing with zombies/infected. For example, the “team” doctor looks at the main character and literally says, “You mean that we have to shoot them twice as if they’re zombies?” People,... this is after SEVEN hours. If a story cant hook me in the first half hour its a must pass... I’m sure, given that it is five or more entire books (this pack alone is more than forty hours), it must eventually get to the point. But with all of the other zombie/apocalypse options out there... there has GOT to be something better. Having read the amazing reviews of this novel, i can only imagine just how BAD the other zombie books on audible are... On the plus side, if there was any plus side... the narration is good and one of the only things that kept me going for as long as i did. The details of how “agents” act and accuracy of many fine details were also a plus, given how terrible fact checkers are (of those details given by people whom write these types of novels). But like i said... it takes entirely too long to get into the story, and there never seems to be a payoff for the effort.

Great book, characters are well rounded and normal not overpowered. Narrator did a great job, really committed to the book. I'm impressed! keep it up fellas!!!

This book depicting the end of the world as we know it, keeps you on the edge of your seat. You get caught up in the lives of the main characters. You cant wait for each chapter.

I'm not exactly finished but I'm pretty emotionally invested at this point. Very few books have had me so invested in the characters as this.

Book will keep you on your toes, well narrated and intense. Get ready for some action. Won’t put it down meaning stop listening because what’s coming next.

Everything grew on me!

This story grows. Well written. Even the narration grows. worth a credit all day long!

Great start to a great series

I really enjoyed how this series started out with getting to know the characters and explaining how the zombie virus came to be. It doesn’t start out like your typical zombie thrillers. The author does a really good job of introducing the characters and building the storyline. This is a awesome listen at a great price and I can’t wait to finish the series!

ok except for pauses

hated the pauses in story to explain terms and things. made things drag out too much

This stored was action packed and I liked the format, but I didn’t really connect with any of the characters.

I have the End Time Saga set of books 1-3 and enjoyed them. Great apocalyptic storyline with well-fleshed out characters. Colonel Jackson in Book 2 had me thinking of the classic "Animal Farm" while the antagonist in Book 3 brought memories of "Lord of the Flies."
What do you think?