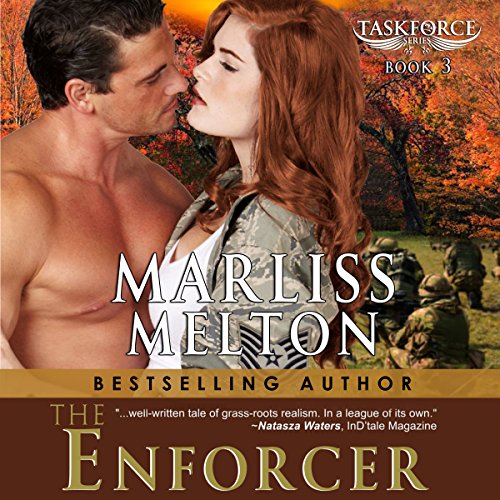 Written by: Marliss Melton
Narrated by: David Brenin
Try for $0.00

ATF Special Agent Tobias Burke is undercover in West Virginia, infiltrating a militia led by Captain Dylan Connelly, suspected of murdering the Secretary of Defense. Dylan, once the Army's battalion leader of Mortuary Affairs, now works as a physician at the local Veterans Hospital, while leading her late-father's Seventh Amendment Militia. When Tobias Burke shows up to enlist, with his ladies-man humor and lovable Labrador retriever, Dylan knows his killer charm hides an ulterior motive. As evidence against Dylan mounts, Tobias's instincts-and then his heart-betray him into wondering if Dylan is being framed. Now, with Dylan's militia locked in a stand-off with the FBI and the nation watching the drama unfold on television, Tobias stares down the barrel of the most difficult choice in his life: expose the real killer and clear Dylan's name, or follow orders.

What listeners say about The Enforcer

Slow burn and lots of heat!!!

Like always I hate to give away too much about the plot of a book in my reviews but there is something to be said about a book with a nice and easy burn. It was delicious listening to the burn and heat between Captain Dylan Connelly and Special Agent Tobias Burke.

Marliss Melton brought to life a woman damaged by war and trying to find her way back, doing it the best way that she could. Her hero was tough. He was tender. He was perfection.

David Brenin's narration was spot on! Through his voice and the way he gave a voices to all of these amazing characters that not only pulled on my heart strings but actually made me set down my knitting needles and reach for a tissue.

If you are looking for a really good book with lots of actual story then I strongly suggest this one!

Honestly I bought this book only because I like redheads. The story and character development was a delightful surprise. From "real people" in the community making up the soliders in the militia to the bond that develops almost immediately between Tobias and Dylan. Their struggles, hers with PTSD and his with the Dylan he comes to know vs. who her file says she is, are totally on the mark and lead to a breathtaking ending. I definitely recommend this book to anyone who likes romance, intrigue, and muscles.

Well, this was a surprise, and not the good kind. Call me crazy, but a truly non-functioning, self-destructive, mentally ill woman getting fake romanced by a truly smarmy undercover ATF agent is not a story I can get behind. Paramilitary, paranoid nutjobs with Big Guns playing militia games in the West Virginia woods are not characters I can feel any empathy for any more than I can for the aforementioned slimy "good guys."

Narrator David Brenin has a voice and style well suited to romantic suspense. I'm up for listening to his work again.

The far right political slant of the "heroic" characters in this book is distasteful to me and just bizarre in the context of a romance. Wish I'd known.

Fiction you could see being reality!

Would you consider the audio edition of The Enforcer to be better than the print version?

I typically prefer print over audio becuase I have issues with the narrator attempting to use various voices for various characters. This one is well-done, but no different, although I may have been a bit more critical since I am from the area where this is set. My family is from Harpers Ferry. I was not offended by any choices made in voices utilized, but it just seemed awkward at times. This is the way I feel on most audio books, so it is not the fault of the author, narrator or anyone else.

Millie! LOL! I love dogs! Otherwise I really liked Toby because of his sense of humor (the T-Shirts were fun!) and the fact he was not over-the-top in abilities. He seemed real.

When they ran off the road in the Suburban. Dillon opening up. I cried! I'm a cryer, though! And the scene with the dove on the window sill - I loved the relationship to the situation. Very well done!

When the world gives you apples, make cider!

I really enjoyed listening to this book. I read it in the print version and thoroughly enjoyed it in that format, too. I have read this series, and many, or all, of Marliss Melton's books and would highly recommend them. This story was not so over-the-top that it could not have played out the way it was as written. When I read I have to, at times, stop myself from being critical of the minor details or liberties taken by the authors. I found myself having to do this a tad more often than usual with this book since I am from this area and my father was a sheriff where this story is set. That's one of those minor details I had to keep pulling myself away from - we don't have city/town sheriff's, rather it is a county position. We have Chief of Police positions for the towns in both counties where this story takes place - Jefferson and Berkeley. On the flip side of this 'issue' is the fact you mention details in the area and I can just picture where you are, what the view looks like (Jefferson Rock for example), smaller communities in the area, and so on. Then I go back to wondering why the VA Hospital police weren't involved in Dillon's issues as they played out at the hospital, and again I pull myself away from that logic to keep the story going and fact this all helps to develop Dillon's character. I am very happy that the often typical negetive stereotyping of WV and the residents was not utilized. And for the most part you showed us as intellegent, decent people and I thank you for that. Eventhough the militia thing could have gone in the weeds, you kept it from doing so. The fact you keep your characters real and don't play into the stereotypes is another reason I enjoy your books and will keep purchasing them and recommending them to others.

Yeah!! This is the third book in the set and Toby gets his HEA!!! I really loved him in the second book and was thrilled to see him taking lead here.

Toby was a riot in the last book, he doesn't disappoint in this story. His t-shirts are a highlight throughout. Dylan is a nice match for him. She needs somebody to lighten her up. I loved her when she was being herself, she really is softer than the hard@$$ she tries to be.

The story this time had several levels. I figured out the who pretty quickly, but the motivation was left until the end. I was really intrigued by this topic, never gave much thought to home grown militias. This gives real insight into the mindset of people who organize and join them. Both fanatics and everyday members. Kudos to Ms Melton for introducing me to something new.

This is a mixed narrative, we get POV from the two leads throughout. There are also a few moments of narration from supporting cast. This is always great for getting into the characters heads. It makes them way more engaging. This was done very well, I never had to figure out who's POV was being portrayed. The transitions were smooth and consistent.

The romance here takes a bit of suspension of disbelief. I am sure these kinds of things happen with people undercover falling for a suspect, but the time frame was really short. Dylan latches on to Toby as a lifeline really quickly, perhaps that had something to do with her PTSD. I am willing to let that go though, because they truly had a connection. I enjoyed their dynamic, it went a long way in selling the romance and feelings.

Yummy steam!!! Oh yeah, I like it when things get smexy!! I gotta say, I am a fan of these men, dominant Alphas who are givers, if ya know what I mean!!! Oh girl, it gets hot and naughty!!!

I listened to the audiobooks, David Brenin is a wickedly delicious narrator. His voice is smokey gravely hotness!!! He suits these books to a T. He has a great speed, brisk and steady at all the right moments. I am definitely a fan of his work, he gives good voice!

Overall, I really enjoyed this book. It moved along at a great pace, the characters were engaging and real through the whole book. This is the first series I have read of Ms Melton, but clearly not the last! I enjoyed her style and creative plotlines.

Disclosure - I received a copy of this book in exchange for an honest review. All thoughts, opinions and ratings my own.

What is the truth? What you've read or see?

Would you consider the audio edition of The Enforcer to be better than the print version?

I liked the print version better, simply because I am paper phobic!! I envisioned Toby "huskier" and Dylan a little more "feminine"

What was one of the most memorable moments of The Enforcer?

PTSD is evident in several of the characters and some were able to work through them better than others. Just as in real life, every individual works through their disorders differently.

What does David Brenin bring to the story that you wouldn’t experience if you just read the book?

I don't know that David brought anything to the story that I would miss....since I tend to read and re-read my books, just in case I might have missed something the first couple of times around. David does good narration on the books I've listened to that he has narrated. I just had the characters envisioned differently.

I felt sorry for the actual "terrorist", since he/she should have seen that their thinking was skewed, even if they were just trying to "help"

This is a great series!! Love that so many authors are directing their efforts toward our military and other stress related issues!