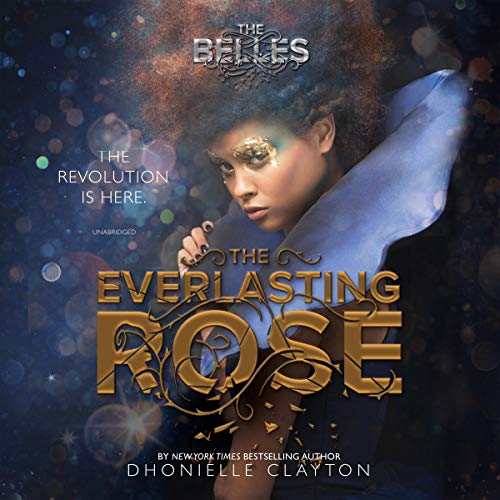 With a price on her head, the evil Queen Sophia out for blood, and no idea who to trust, Camellia Beaureguard, the former favorite Belle, must race against time to find the ailing Princess Charlotte, who has disappeared without a trace. Sophia's imperial forces will stop at nothing to keep Camille, her sister, Edel, and her loyal guard, Remy, from returning Charlotte to the palace and her rightful place as queen.

With the help of an underground resistance movement called the Iron Ladies - a society that rejects beauty treatments entirely - and the backing of alternative newspaper The Spider's Web, Camille uses her powers, her connections, and her cunning to outwit her greatest nemesis, Sophia, and attempt to restore peace to Orleans. But enemies lurk in the most unexpected places, forcing Camille to decide just how much she's willing to sacrifice to save her people.

A Booklist pick of the day. A Tor.com reviewers' choice of this winter's upcoming young-adult SFF books.

Loved it! it picked up right where The Belles left off and never missed a beat!

This book was a great follow up to the previous book The Bells! must read!

I read the first book and enjoyed it so much that I searched for more and came upon this second book. which I enjoyed even more than the first. the story teller was great with the different voices for the characters. I loved it.. waiting for more..

Loved the first one, this one was ok.

I really enjoyed the first audiobook in the series. I couldn't stop listening to it, and I was so excited for this one. The reader's voice is beautiful. This one took me months to listen to because it didn't keep me as interested at all. This is an extremely minor spoiler, but Princess Sophia was much less present in this book, and after listening to this one, I realize her absence left a huge hole in the book. It got interesting to me when she was active. This one was just ok.

Interesting storyline with mystery and magic. It is a commentary on our society's obsession with beauty.

I really enjoyed book 2. I loved how I was transported be right back into the heart of the the story. Beautifullly written and beautifully narrated. I would love to see this on the big screen. It would be magical!

First book I listened to twice, back to back. I am looking forward to the next book.

Innovative and gives the reader everything they need in this sequel! Love Black girl sci-fi

Met Dhonielle at an author visit at TC Williams HS in Alexandria. She was a great speaker with the teens showcasing her chops as an educator with great classroom management. I was lucky to get a signed copy of first book for my daughter. My kids and I listened to it too. We loved the first one. We LOVED Rosie Jones' narration. She skillfully pulls off an array of characters.

Eagerly awaited the release of this one. Loved Rosie and my kids and I couldn't wait to finish it to see where things are going.

The first is our favorite of the two but this one doesn't dissapoint. Bring on Book 3!