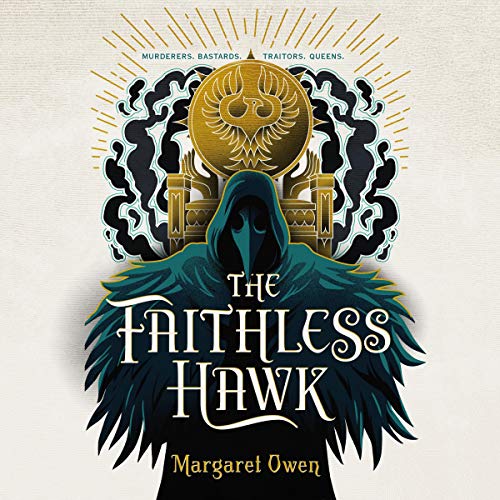 Written by: Margaret Owen
Narrated by: Amy Landon
Try for $0.00

Kings become outcasts and lovers become foes in The Faithless Hawk, the thrilling sequel to Margaret Owen's The Merciful Crow.

As the new chieftain of the Crows, Fie knows better than to expect a royal to keep his word. Still she’s hopeful that Prince Jasimir will fulfill his oath to protect her fellow Crows. But then black smoke fills the sky, signaling the death of King Surimir and the beginning of Queen Rhusana's merciless bid for the throne.

With the witch queen using the deadly plague to unite the nation of Sabor against Crows - and add numbers to her monstrous army - Fie and her band are forced to go into hiding, leaving the country to be ravaged by the plague. However, they’re all running out of time before the Crows starve in exile and Sabor is lost forever.

A desperate Fie calls on old allies to help take Rhusana down from within her own walls. But inside the royal palace, the only difference between a conqueror and a thief is an army. To survive, Fie must unravel not only Rhusana’s plot, but ancient secrets of the Crows - secrets that could save her people or set the world ablaze.

What listeners say about The Faithless Hawk

Very much worth reading

The kind of a pet peeve for me: There are a few what I call "narrative blind spots" where things get a bit hand wavy to why they aren't taking pretty obvious courses of action or drawing some pretty simple conclusions from facts they have because it would undercut the drama. Not the worst case of it by any means but noticeable.

Great until you finish it

The initial story of book one was compelling with a down-to-earth protagonist (with only occasional lapses into melodramatic "she hated...!" and "she wanted...!" tangents). the hard magic system was also engaging and unique, the caste system surrounding it believably corrupt and gritty; but the theology undergirding the story, revealed fully in book two, is a tad broken. it suffers as a result when it tries to take divinity from a spiritual and abstract space and spoils it with answers to questions better left alone. Its not 'medichlorians" bad, of worse 'Alien:Covenant' bad, but it is 'Avatar' 2nd series season two bad.

Divinity in stories is tricky, especially when potraying godly benevolence. when centered around a character's faith in a code of behavior, like Constable Javert in 'Les Mis' or Tevye in 'Fiddler on the roof', questions of gods become questions of moral objectivity, the character's struggle to maintain, discover or refine their moral character. When the gods become tangible, then their moral standards and contadictions supersede the mortals' in the story, because the mortals are judged, in that scenario, by the gods not their standards of right and wrong. In that case a reasonable audience thinks, 'if they see
evil and cant stop it, theyre not omnipotent; if they can stop it and refuse, theyre malevolent; and if they cant do either why call them gods at all?' the PROBLEM with sticking physical gods in a story is maintaining the story as a hero's journey to better understand and practice good behavior, not the quest to appease a god; that will instantly be put on trial for every obstacle in the hero's way.

spoilers:
making your main character God only raises more questions than it answers, and the answers sound like bald manipulation for the sake of melodramma.

owens sets up her premise expertly but, i think, became enamored too much with shock value, twists, and flashy set pieces that beg the question 'Why didnt X do that earlier?' This kind of clumsy spectacle, after so much smart characterization in book one, breaks the story. too much not to bruise ny review score.

I personally think the first book read better, but this is a good follow-up. my main complaint is that the narrator's accent seems to change for the main character throughout the book.

This is a solid second book in the series and seems to be the final book. I am glad the author chose not to drag things out for the sake of 3 books. The second book typically featuring a long journey full of will they won't they romantic missteps is getting old. Thankfully, this is not that. Better than the first and ends the story well.

The writer really honed her craft for book two. I found the first book a bit of a struggle but this one was fantastic!

Most of the book I was yelling at Fie like she was Dora the Explorer! But still an enjoyable story and some lovely surprises that wove together nicely at the end... though I wanted to stab Fie for being obtuse!