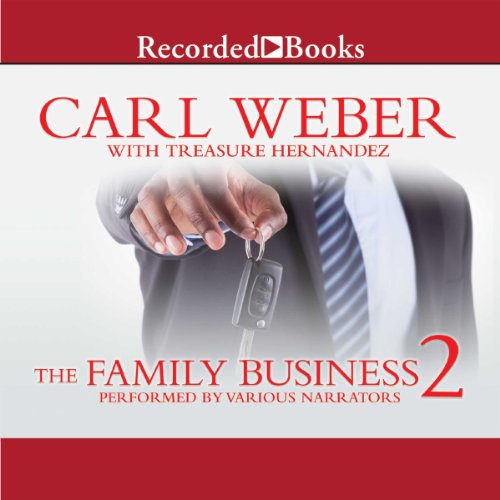 In his typical jaw-dropping fashion, Carl Weber returns with part two of his New York Times best-selling Family Business series. He's brought along a friend in best-selling author Treasure Hernandez, and together they've added more drama and new family members to the world of the Duncans. By day they are upstanding citizens running one of New York's most respected car dealerships; but by night, they're criminals who control most of the East Coast drug traffic. No matter whether they're on their day or night jobs, one thing is true about the Duncans: there is never a dull moment to be found.

Momma drama takes over the Duncan clan, as there is still uncertainty about who has fathered the Duncan sisters' new babies. Meanwhile, Orlando Duncan, the family's new CEO and a man with his own baby momma problems, has just developed a new product that may make the millionaire Duncans into billionaires. Orlando only has one obstacle in front of him, and it's not law enforcement or one of his family's many rivals. It's his mother, and she may be his most formidable opponent to date, because she's making the family take sides. Can a civil war within the Duncan family be averted before it tears them apart?

What listeners say about The Family Business 2

Loved it. Weber is known for hiding the the truth in the story so when it comes out you are shocked and like "WOW" then you are going back to remember things. He is good!! The different voices is a plus. These narrators are the best. Right voice, tone and brings the book to life.

Where does The Family Business 2 rank among all the audiobooks you’ve listened to so far?

1 and 2 are ranked among the best that I have read.

Didn't like the ending but i could see a part 3.

Carl Weber and Treasure make a great team. This book is a great listen with a lot of unexpected turns.

Yes, it has an interesting story which continues from the first book, so I'd definitely recommend reading the Family Business prior to this one to ensure you understand the characters. I thoroughly enjoy reading/listening to books that have a history of past characters. You feel right at home to continue on with the saga and enjoy finding out what is happening in your favorite characters lives. This book held my attention from start to finish. It keeps you in suspense and hanging on from one scene to the next.

What was one of the most memorable moments of The Family Business 2?

I enjoyed the situation that was brewing between Ruby and Orlando.

The narrators bring the story to life especially when there are multiple narrators because it helps you to transition from the characters and easily follow the script. When the narrators are interesting (as were all of the ones in this story) it really makes you feel as if you are sitting in front of the big screen at the theater, but without the screen. It helps me appreciate what it must have been like before TV when people listened to stories via radio. The narrators are simply entertaining.

No, I did not have an extreme reaction.

I'm looking forward to the other books that follow!

Carl Weber did it again...all I can say is that I can't wait for the next book. This book was filled with drama. I loved every bit of the book. Paris is still the same and still my favorite I love her true brat daddy's little girl personality. What I liked most about the book is that it introduces new characters and you get to know some characters you only heard about who were silent characters in the first book and their roles in the family business. All the characters were brought to life by the performers and you either love them or hate them. Anyone who enjoys Carl Weber reads will enjoy this and will be waiting for the next installment.

Wonderful listen! Carl does it again

This book is wonderfully narrated and Carl Weber has fast become one of my favorite authors to listen to on audible. I love the twists and turns of his stories and this one does NOT disappoint. LISTEN. you will be hooked!

Enjoyed this book even tho it had a couple or three/four gaping holes, plus the ending left a great big hole for FB #3. I think part of the ending was probably a compromise between the two authors.... I gave it three stars for "Overall" instead of four stars mainly because in a scene near the end, Paris and Sasha are holding a petty argument in between shooting bad guys on the outside of the house while on the inside of the house other bad guys are threatening to kill their family members. Who has time to argue about petty jealousies when the bad guys are about to kill your family members?? And, these two ladies are the only ones with guns to save the day!? who does that? That was the most ridiculous scene in the entire novel while some of the other "funny" scenes were nevertheless entertaining. I am glad I listened, but less entertained than the "Man in 3B". The narrators were very good.

Yes. I believe it has a great story line !!

What was one of the most memorable moments of The Family Business 2?

The most mermorable parts of the book was when ruby found out her brother really died but doesn't know her fiancé is reposible .

Would you listen to another book narrated by the narrators?

Yes and I have

The part the really moved me , was when. Orlando showed up at his family home and Paris. First saw him and realized he was alive ! I love. That b/c. Paris and Orlando couldnt stand each other so to see them so intimate was nice

What did you love best about The Family Business 2?

I loved how Carl Weber and his co-author decided to switch some of the points of view, allowing us to learn more about some of the other characters.

What other book might you compare The Family Business 2 to and why?

Hmm...don't know that I've read a book that is comparable in plot to The Family Business 2; however, the Duncan family could be considered similar in some ways to HBO's The Sopranos.

I enjoyed the introduction of Sasha. Although she was a bit sex-crazed, it added an interesting perspective to the history of the family and their business.

If you could take any character from The Family Business 2 out to dinner, who would it be and why?

Junior! I loved his narrator's voice; he just sounded like a cool and debonair guy. Junior seems like he knows how to wine and dine and is willing to take care of his woman when he's found the right one.