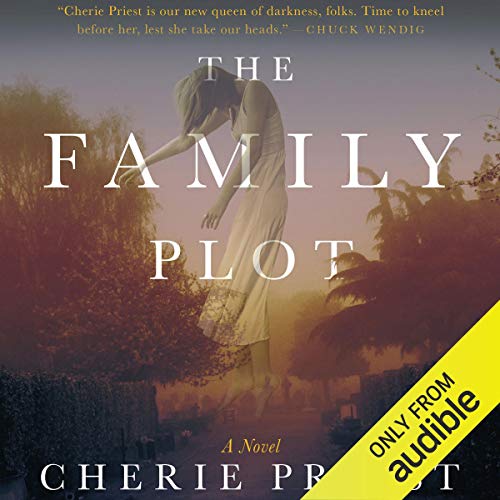 Written by: Cherie Priest
Narrated by: Kate Udall
Try for $0.00

Chuck Dutton built Music City Salvage with patience and expertise, stripping historic properties and reselling their bones. Inventory is running low, so he's thrilled when Augusta Withrow appears in his office offering salvage rights to her entire property. This could be a gold mine, so he assigns his daughter, Dahlia, to personally oversee the project.

The crew finds a handful of surprises right away. Firstly, the place is in unexpectedly good shape. And then there's the cemetery, about 30 fallen and overgrown graves dating to the early 1900s. Augusta insists that the cemetery is just a fake, a Halloween prank, so the city gives the go-ahead, the bulldozer revs up - and it turns up human remains. Augusta says she doesn't know whose body it is or how many others might be present and refuses to answer any more questions. Then she stops answering the phone.

But Dahlia's concerns about the corpse and Augusta's disappearance are overshadowed when she begins to realize that she and her crew are not alone, and they're not welcome at the Withrow estate. They have no idea how much danger they're in, but they're starting to get an idea. On the crew's third night in the house, a storm shuts down the only road to the property. The power goes out. Cell signals are iffy. There's nowhere to go and no one Dahlia can call for help, even if anyone would believe that she and her crew are being stalked by a murderous phantom. Something at the Withrow mansion is angry and lost, and this is its last chance to raise hell before the house is gone forever. And it seems to be seeking permanent company.

The Family Plot is a haunted house story for the ages - atmospheric, scary, and strange, with a modern Gothic sensibility to keep it fresh and interesting - from Cherie Priest, a modern master of supernatural fiction.

What listeners say about The Family Plot

I bought this book for, quite literally, no real reason. I hadn't heard of the author or the narrator and it had no reviews to guide my purchase... it was a whim. I was quite pleased to soon learn the story was set very near where I live; an area tucked in the valleys of Southeastern Tennessee in the shade of the historic Lookout Mountain. I'm not anti-ghost stories but it takes a lot to impress me (I started reading Stephen King in 3rd grade, after all) and I need a story to envelop me with its reality. The author had a good context (historic property salvagers) and the motives weren't too far fetched for any of the characters. The author does a decent job with helping the reader visualize the creepy aspects.

Overall it was a decent purchase. While The Family Plot won't make it to my "repeat listen" collection, it provided a good backdrop for my daily commute. I may give the author another shot in the future. The narration was also decent; I didn't dislike it or love it, but it was solid.

if you're looking for paranormal fiction, a genre I don't do often, this one will entertain you for a few hours and the author's view of the location is spot on.

Stick a fork in me 'cause I'm done.

It's not that the book wasn't for me. It had a good story idea that was lost in the background of Dahlia's former marriage. I tried, I really tried to like this book and I'm sure someone else will.

I feel the Withrow family story could have been filled out more. Who, what, when, where and why as far as background on the house would have been greatly appreciated. Also, I still don't understand what Dahlia's ex-husband and that story had to do with anything.

The narrator was okay. I'm not sure what she could have done to make this book better. You can only work with what you have.

I will be returning this book for one reason and one reason only. I had problems with downloading the book to begin with. The representative that helped me was great and kept me posted with what was going on. I was also given an extra credit to use while I waited for the techies to work their magic. So, I was pretty much going to follow thru with this book and keep it. The download cut off before the end of the book. I know I can delete and re-download but at this point I'm pretty much done with the whole process and with this book. Again....your representatives and the techs I talk to are great. Always.

Southern Ghost Story with All the Trimmings

Set in a decaying mansion in Tennessee that is scheduled to be demolished in the near future, a team is sent in to scavenge what could be saved of its architectural features and remaining contents. And as you would expect, Things start Happening. Creepy Things. Then an overgrown plot is discovered by the workers with a dozen or more headstones.

According to the author's blog this was in part inspired by a reality show involving a Virginia company called Black Dog Salvage. I only knew about the company because a friend who was building a log cabin took me there when we had to be in Roanoke on business. Moving the Salvage business to Tennessee where the author lives and using this as the starting point for a ghost story is an intriguing idea.

The narrator is good but not spectacular. The southern accent isn't laid on too heavy.

The only real problem I had with the novel was the pacing. It's a bit slow for the first two thirds of the book and there was a lot more about architectural salvage included than I really wanted to know. And although there were some spooky moments there wasn't any shockers until near the middle.

I haven't read a ghost story in a very long time. This was a such a great ghost story with some fabulous characters.

Chuck has owned Music City Salvage for years, but now the company is hanging by a string...that is until one day when Mrs Withrow came in and offered her estate to be stripped for all it's valuables before it was demolished. She was willing to sell the estate to him for $40,0000.00. Chuck couldn't pass it up. He had to use all his money to purchase this property, but was hoping that they would get enough out of the house to fix their money problems.

Being on a very shoe string budget, Chuck asks his daughter Dahlia to take the very few workers they have to go to this estate and strip it of all it's valuables.

Dahlia and her nephew and a few other workers take on the task at hand, and this is when everything starts to fall apart.

Day times seems to be just fine, but when the sun goes down strange things start happening in the Withrow Estate.

Dahlia seems to think that the house is sometimes talking to her. Or at least responding to her. There is a door that only unlocks certain parts of the day or night.

As, the crew starts to notice more and more weird and strange things happening they all come together and decide to sleep in the same room. The shower seems to be the most dangerous part of the house.

There is so much to this story. I could keep going on, but I am afraid I will give everything away. I LOVE ghost stories. I love it even more when there are multiple ghosts. This has all of that. Good ones, bad ones, and just plain strange things are happening to this crew.

I think if you enjoy a good ghost story you will really enjoy this one. The narrator was awesome, which made the story that much better.

Source: I bought this book for myself to listen to. I was not compensated in any way for this review. These are my own PERSONAL thoughts on the book.

Creating a haunted house story that doesn’t sound like every other haunted house story is not an easy task. I think the key is a meaningful sub plot (say, Jack Torrence’s struggle with alcoholism in the Shining), and that is where this book comes up short for me. There was not enough to make me feel much sympathy for the characters, or to care what happened to them.

This had been sitting in my wish list for awhile and I decided to go ahead and get it. Im glad I did it was very enjoyable. The only problem I have with it was it seemed like they said GD after every breath. Im not squeamish about language but it was like the author went out of their way to insert it into a sentence. All in all it was a nice creepy story.

I couldn't wait for this book to end. I want a refund on this book.

Are you afraid of ghosts?

NUMBER OF HEARTS: 4
Another great and disturbing story from Ms. Priest. I am very happy that I picked up a copy of The Family Plot. I was not 100% sure what to expect when I started this book except for the fact that Ms. Priest will give us a great story. I really enjoyed not only the humans but the ghost too.
After a bit of a slow start to the story the twists and turns that Ms. Priest put into this story kept me on the edge of my seat. And the ending!!! OMG!!! The ending!!!!
If you are a fan of horror or ghost or Ms. Priest I would encourage you to pick up a copy of The Family Plot and find out why no one wants to live at the Withrow Estate.
This was my first book narrated by Kate Udall. Ms. Udall did a good job with this story. I will be looking for more books narrated by her in the future.


Disclaimer:
I purchased this book from Audible.com this is my honest review. This review is my own opinion and not a paid review.

I enjoyed this audio book. the story was compelling enough to keep me interested and just creepy enough for my tastes.

Should be made into a movie...

Loved the story! The narrator brought it to life. Just wonderful!

My only complaint is that I wanted to know more, but as with most hauntings, there's got to be a little mystery.