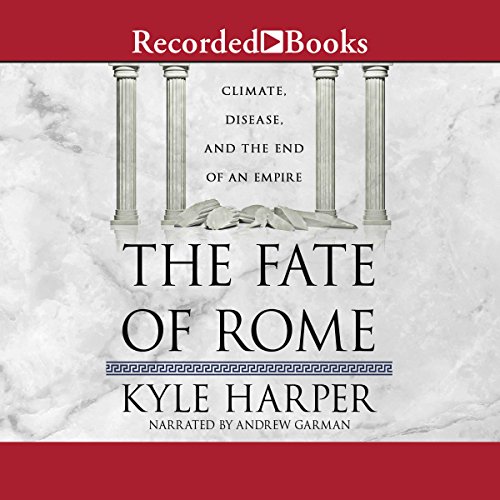 The Fate of Rome

Written by: Kyle Harper
Narrated by: Andrew Garman
Try for $0.00

Here is the monumental retelling of one of the most consequential chapters of human history: the fall of the Roman Empire. The Fate of Rome is the first book to examine the catastrophic role that climate change and infectious diseases played in the collapse of Rome's power - a story of nature's triumph over human ambition.

Interweaving a grand historical narrative with cutting-edge climate science and genetic discoveries, Kyle Harper traces how the fate of Rome was decided not just by emperors, soldiers, and barbarians but also by volcanic eruptions, solar cycles, climate instability, and devastating viruses and bacteria. He takes listeners from Rome's pinnacle in the second century, when the empire seemed an invincible superpower, to its unraveling by the seventh century, when Rome was politically fragmented and materially depleted. Harper describes how the Romans were resilient in the face of enormous environmental stress, until the besieged empire could no longer withstand the combined challenges of a "little ice age" and recurrent outbreaks of bubonic plague.

A poignant reflection on humanity's intimate relationship with the environment, The Fate of Rome provides a sweeping account of how one of history's greatest civilizations encountered, endured, yet ultimately succumbed to the cumulative burden of nature's violence. The example of Rome is a timely reminder that climate change and germ evolution have shaped the world we inhabit - in ways that are surprising and profound.

Author bio: Kyle Harper is professor of classics and letters and senior vice president and provost at the University of Oklahoma. He is the author of Slavery in the Late Roman World, AD 275-425 and From Shame to Sin: The Christian Transformation of Sexual Morality in Late Antiquity. He lives in Norman, Oklahoma.

What listeners say about The Fate of Rome

One of the best, most original books on the decline of Roman Power.

This is an absolutely extraordinary book. I have been reading about Rome for most of my adult life. Harper’s book nonetheless continually surprised and even shocked me. His erudition is overwhelming, his research is formidable and his style is approachable and reader friendly. I can not recommend this book highly enough. If you think you know your Roman history - guess again and prepare to be amazed.

This book is more like a who done it.
I couldn't put it down. The discussion of the latest scientific techniques give authority to Dr. Harpers conclusions. Not just the historical vagaries of the climate, but the detailed descriptions of pandemic waves flesh out a compelling narrative. Please make his other books available.

As others have noted, this is like some sort of Roman ‘Guns, Germs & Steel’, so much so that honestly Harper and Diamond should probably just team up. That, of course, could be a touch problematic: an event - even a series of them - does not happen in isolation. It can be tempting to lean a bit too heavily on the exciting new idea, and, as with Diamond, there is a whiff of that here.

But by and large this is a meaningful addition to the standard understanding of Roman history, so often told as variations on a timeline, each speaking of “the known world” as though those in the hinterlands assumed all the world before them was some sort of mass hallucination. That is to say Rome did not exist in a terrarium, a bubble, divorced from world events, from climate, from disease. It’s refreshing to dive into a book which not only acknowledges this, but is about it.

It’s not perfect. Some of it can be a bit of a slog. Some of it is presented as a revelation when really it’s probably obvious or common sense. And the narration is unremarkable, in either direction.

If this topic didn’t immediately pique your interest then the book itself likely won’t persuade you. But if it did then I don’t think you can go wrong in checking this out.

As Diamond did in Guns germs & Steel, Harper makes a great case for the deep influence of environment in the course of history. We are all familiar with the stories of the Roman Republic & empires as told by men writing things down. But the larger view of that history in the context of climate change and disease evolution suddenly makes a lot sense. Many Aha! moments. I trust this work will be reinforced and expanded by others on the trail of history synthesis.

Does an excellent job with showing the power of scientific sources for history. Full disclosure, I do have a fascination with epidemic history, so not completely unbiased. A very interesting take on the decline of the Roman empire.

The author begins by admitting that the new methods and discoveries which fuel this book are progressing at such a rapid pace that the whole book will probably be out of date in five years.
All the more reason to read it now. It's a wonderful book. It has revised so much of what I thought I knew about Rome, and not just facts, it has changed my base narrative.
It's one of those books where at least daily I found myself pestering my family with anecdotes.
I love it, and I'll probably come back to it again.

Hard to understand because the author wrote with a thesaurus in hand. It is a poorly told history of the fall of Rome, with some discussion about plagues and a poor argument about climate change. The reader doesn't know the difference between climatic and climactic. An awful book.

Wonderful to see history as we have learned it, supplemented, expanded and enriched by ecology, microbiology and climatology. This allows a deeper, richer and much more nuanced understanding of this most famous “decline and fall.” Yes the players in this drama made good decisions and bad. But forces they could not imagine much less understand or control often were often decisive. Well written and well performed. Deserving of a second or even a third read/listen.

I was hoping for some new insight behind the decline of Rome. However, this was not what I envisioned. The narrator at time was extremely flat and overall the book was just boring

Wow a Roman history book that took me by surprise

I got this book not really knowing anything about it. I’m a big Roman history fan and have read my fair share of Roman history but this book surprised and inspired me to look at the late Roman period and history in general through a new lenses. I can not recommend this book enough for those who want to continue to explore our human history and its context

This book is so full of interesting information that I would have considered it a valuable scholarly contribution at any time. Read in the context of the Coronavirus pandemic it acquires a relevance that the author probably never imagined. It gives us a chance to rethink the profound political and social changes of Late Antiquity from the lens of climate change and microbial evolution and interaction with ancient civilizations. The timeframe covered is from the Antonine Plague up to, and very much including, the Plague of Justinian and its aftershocks until the seventh century CE.

While I enjoyed the narration and listened to the end, I decided half way through that this book merits to be bought as a physical copy as well, for it contains a wealth of data the significance of which is easily lost when one doesn't see the figures written down. I think it will also be invaluable as a reference book in the future.

I came to this book after it was recommended by Mike Duncan on his Revolutions podcast. It's a fascinating subject matter but the execution is lacking. I made it about 2 1/2 hours in before giving up. The writer switches between some pretty needlessly flowery descriptions of Ancient Rome to extremely technical scientific jargon and the transition between the two is jolting. It would have been helpful if the writer had obeyed Orwell's advice to never use a long word where a short one will do. The narration suffers as a result: is the narrator reading a colorful narrative history of Rome or a scientific treatise on disease, climate, and social structure? That said, the fundamental subject matter is interesting and will enlighten and entertain those who can get past the problems described above.