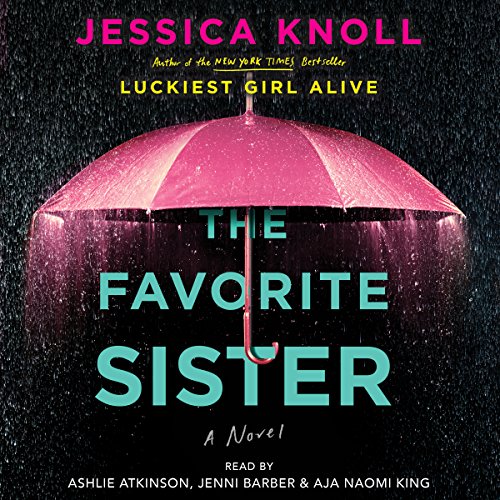 From Jessica Knoll - author of Luckiest Girl Alive, the instant New York Times best seller and the best-selling debut novel of 2015 - comes a blisteringly paced thriller starring competitive sisters whose dark secrets and lies result in murder when they sign on to a reality TV show.

When five hypersuccessful women agree to appear on a reality series set in New York City called Goal Diggers, the producers never expect the season will end in murder....

Brett's the fan favorite. Tattooed and only 27, the meteoric success of her spin studio - and her recent engagement to her girlfriend - has made her the object of jealousy and vitriol from her castmates.

Kelly, Brett's older sister and business partner, is the most recent recruit, dismissed as a hanger-on by veteran cast. The golden child growing up, she defers to Brett now - a role that requires her to protect their shocking secret.

Lauren, the start-up world's darling whose drinking has gotten out of control, is Goal Diggers' recovery narrative - everyone loves a comeback story.

And Jen, made rich and famous through her cultishly popular vegan food line plays a holistic hippie for the cameras but is perhaps the most ruthless of them all when the cameras are off.

The Favorite Sister explores the invisible barriers that prevent women from rising up the ranks in today's America - and offers a scathing take on the oft-lionized bonds of sisterhood and the relentless pressure to stay young, relevant, and salable.

"Knife-sharp and enthralling, Jessica Knoll's The Favorite Sister is as bold and smart and audacious a novel about women and ambition as you could hope for. A more-than-worthy follow-up to Luckiest Girl Alive, it proves Knoll is a literary force to be reckoned with." (Megan Abbott, New York Times best-selling author of You Will Know Me)

What listeners say about The Favorite Sister

I would not recommend this book. It didn't have much of a plot and it was very hard to get through.

Both the author and the narrators of this audiobook are extremely talented. This writing explores the dark and selfish minds of successful women as well as agism, family bonds, feminism, fame, and American culture. It’s a pessimistic view on sisterhood and friendship, but there’s truth and grit to it that make it a tantalizing read.

Reality TV at it's best

This is exactly what you imagine happens with each person in your favorite Bravo/TLC/Lifetime/WE reality show behind the scenes, with a twist.
It's good, well written and the characters are whole people that are well written. You recognize the narrators' voices, but yet you can't quite picture who they really are, the characters are written that well.
This is more than a great summer read, it's a great read/listen that you'll want to come back to again and you'll try to hear the signs leading up to the reveals.

The Luckiest Girl Alive is my favorite book, but I think the Favorite Sister may now be it. I felt like this book was written just for me. I did not even finish it yet and I am writing the review. The narration alone is phenomenal and the twist and turns keep you hooked. For anyone who is a Bravo fan will love this book.

I thought the book was really good. I was extremely entertained by the storyline and found it to be in with the times. The ending was pretty flat, but the overall story made up for it.

This was great! Better than her first book by far! Loved the story line about Real Housewives and murder best of both girl worlds!!
Like nothing I’ve read before!!

Surprise ending, I thought I had this one all figured out, was I wrong.

This has it all, family dynamics, friends, enemies, catty coworkers, jealousy and love. You go behind the scenes of “Reality Tv” and things are not always as they appear.

I thought the story was fresh, funny and timely. I loved Brett’s unique voice and how they imitated one another speaking. I really enjoyed it.

Did not finish. This is another book that should come with a warning. The luckiest girl was really good and I enjoyed it. This one...

Thankful for a refund

I’m so thankful Audible let’s you return books. How did the narrator of Brett ever become a narrator? I only made it a short way through Chapter 1 and couldn’t get past the narrator’s voice and had to abandon listening all together. Really unfortunate.