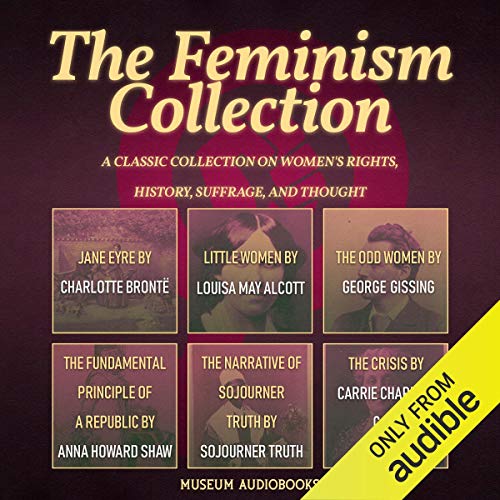 Feminist authors have campaigned for women's rights, including the right to vote, work, and own property. Feminist literature includes fiction, nonfiction, drama, and poetry which supports the goals of defining, establishing and defending the civil, social, political and economic rights of women.

Book 1: Jane Eyre is a novel by the English writer Charlotte Brontë, published under the pen name "Currer Bell" in 1847. The novel traces the life of Jane, including her love for Mr. Rochester, the master of Thornfield Hall. The book was the first to focus on its main character’s moral development through a first-person narrative.

Book 2: Little Women is a novel by Louisa May Alcott who was also an abolitionist and a feminist. It was originally published in two volumes in 1868 and 1869 and is still a popular children's novel. The setting is an imaginary household based on her own residence in Massachusetts, while the characters are modelled on the author and her sisters. The narrative chronicles the lives of the four March sisters - Meg, Jo, Beth and Amy - from childhood to motherhood.

Book 3: The Odd Women is an 1893 novel by the English novelist George Gissing. The themes include the role of women in society, marriage, morals, and the early feminist movement. A cross-section of women's lifestyles set them apart in the novel.

Book 4: Anna Howard Shaw (1847-1919) was a leader in the campaign for women’s suffrage. On June 15, 1915, with a referendum to grant women the vote in New York State, Shaw gave this speech at a rally in Ogdensburg, New York, at the City Opera House. The author’s main argument is that denying the vote to women is incompatible with the fundamental idea of a republic.

Book 5: Sojourner Truth’s autobiographical Narrative chronicles her life as a slave in upstate New York, and her transformation into an abolitionist, women’s rights activist, orator, and preacher. She was born around 1797, and emancipated by state law in 1827. Narrative was published in 1850. In the 1870s her friend Frances Titus compiled a new edition, adding the “Book of Life”, a scrapbook of articles and essays.

Book 6: "The Crisis" is a speech given by Carrie Chapman Catt at Atlantic City, New Jersey on September 7, 1916. It motivates women to join the fight for women’ suffrage. She dedicated much time and effort to the campaign that helped to pass the Nineteenth Amendment to the United States Constitution, which gave US women the right to vote in 1920.

What listeners say about The Feminism Collection