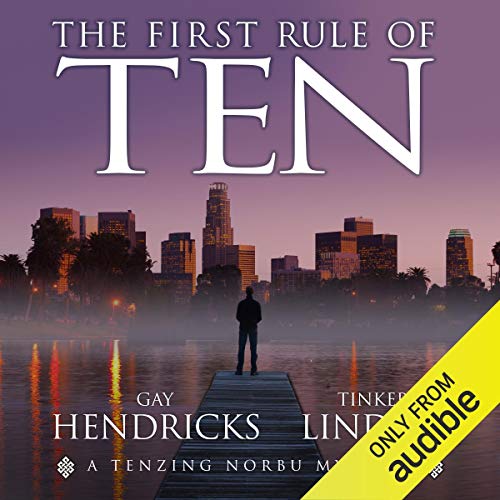 The First Rule of Ten

"Don't ignore intuitive tickles lest they reappear as sledgehammers." That's the first rule of Ten. Tenzing Norbu ("Ten" for short) - ex-monk and soon-to-be ex-cop - is a protagonist unique to our times. In The First Rule of Ten, the first installment in a three-book detective series, we meet this spiritual warrior who is singularly equipped, if not occasionally ill-equipped, as he takes on his first case as a private investigator in Los Angeles.

Growing up in a Tibetan Monastery, Ten dreamed of becoming a modern-day Sherlock Holmes. So when he was sent to Los Angeles to teach meditation, he joined the LAPD instead. But as the Buddha says, change is inevitable; and 10 years later, everything is about to change-big-time-for Ten. One resignation from the police force, two bullet-wounds, three suspicious deaths, and a beautiful woman later, he quickly learns that whenever he breaks his first rule, mayhem follows.

Set in the modern-day streets and canyons of Los Angeles, The First Rule of Ten is at turns humorous, insightful, and riveting - a gripping mystery as well as a reflective, character-driven story with intriguing life-lessons for us all.

An enjoyable new genre!
It's not noir. It's not supernatural. It's not snarky. It's not the broken-twice divorced, living in the poor house, falling for a hot curvy woman with tears streaking her cheap mascara down her cheeks.
It's wholesome and fullfilling.
The 4 star rating is because the last hour of the book kind of drags. Like too much fluff at the end. But better at the end than the beginning, right? It still could be tighter; the first 85% was so solid and promising.
The romance angle was kind of weak - the overreactions were almost unbelievable, given the characters' ages and otherwise demonstrated maturity. It's easily conceived all relationships need some strife and conflict, but this was borderline juvenile teeny-bop eye-rolling temper tantrums. It also served a higher plot purpose ...
Overall, the scenes were intriguing and innovative. The characters grew, as did friendships, trust, and the truth.
I'd definitely recommend this mystery-suspenseful Tibetan detective audiobook. Will I pick up the next? Most likely yes, within the next 60 days.

There were so many phrases that I rewound to re-hear. Some were profound, some funny, some just plain clever as hell.
It kept my attention and I cared deeply about the character… and his cat.
Can't wait to listen to them all. Highly recommend and would love to see this as a series on TV!

I have thoroughly enjoyed the first two books in this series, "The Broken Rules of Ten" and "The First Rule of Ten". The interweaving of Eastern and Western thought, the New Age and traditional elements, along with interesting characters and a great plot, makes for very entertaining listening. The narrator was also excellent. I look forward to the next books in the series.

One of the better reads of late

Quite enjoyed this work. Good characters, story and reading. Just enough intrigue to keep you guessing w/o getting dragged down w/ excess details. Easy to connect w/ the characters. Definitely worth the time. Chuck Solvang CA

An excellent performance of an interesting mystery. Ten is a very human character with a Buddhist upbringing. The mystery is real and different yet based on one of the two common motivations for evil. Just when you think it is over, there is still more to come. Highly recommend for any one interested in mysteries and an open mind to other belief systems. Thank you for the good listen!

This was an interesting take on the hard boiled detective genre. The location and some of the family issues reminded me of Michael Connelly's Bosch. The narrator did a great job with the large cast of characters. I just bought book two of this series. Hope it's just as good.

Would you listen to The First Rule of Ten again? Why?

Yes, definitely. The book is sprinkled with Buddhist Philosophy/Wisdom that is told through the story and also through Ten's thoughts. Very effective.

The narration was perfect, not a single distraction from the message.

I was brought to (happy) tears many times throughout the book. Listen and you will shed a few tears also.

I absolutely loved the book. I didn't want it to end, so I'm going to download Ten's 2'nd rule now