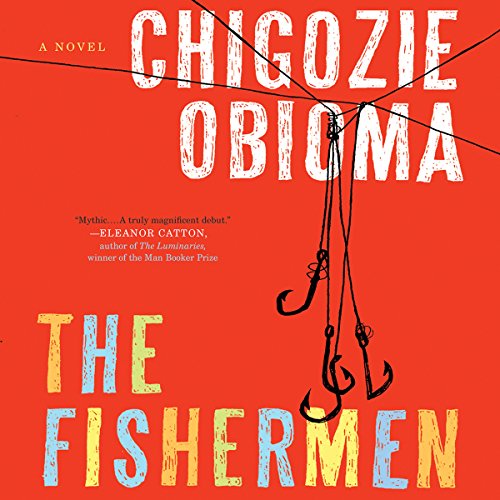 Written by: Chigozie Obioma
Narrated by: Chukwudi Iwuji
Try for $0.00

In a Nigerian town in the mid-1990s, four brothers encounter a madman whose mystic prophecy of violence threatens the core of their close-knit family.

Told from the point of view of nine-year-old Benjamin, the youngest of four brothers, The Fishermen is the Cain and Abel-esque story of an unforgettable childhood in 1990s Nigeria, in the small town of Akure. When their strict father has to travel to a distant city for work, the brothers take advantage of his extended absence to skip school and go fishing. At the ominous, forbidden nearby river, they meet a dangerous local madman who persuades the oldest of the boys that he is destined to be killed by one of his siblings.

What happens next is an almost mythic event whose impact - both tragic and redemptive - will transcend the lives and imaginations of its characters and its listeners. Dazzling and viscerally powerful, The Fishermen never leaves Akure, but the story it tells has enormous universal appeal. Seen through the prism of one family's destiny, this is an essential novel about Africa with all of its contradictions - economic, political, and religious - and the epic beauty of its own culture.

With this bold debut, Chigozie Obioma emerges as one of the most original new voices of modern African literature, echoing its older generation's masterful storytelling with a contemporary fearlessness and purpose.

"Obioma's remarkable fiction is at once urgently, vividly immediate, yet simultaneously charged with the elemental power of myth." (Peter Ho Davies, author of The Welsh Girl)
"Obioma writes with gorgeous restraint reminiscent of the intricate prose in a Tolstoy novella. Every sentence delivers a precise and heartfelt blow. Hardly anyone writing today is delivering this level of intricacy, lyricism, and control. Add to that, the urgency and importance of his message. It just doesn't get better than this. Get used to the name: Obioma is here to stay." (Alexandra Fuller, author of Cocktail Hour Under the Tree of Forgetfulness)
"Awesome in the true sense of the word: crackling with life, freighted with death, vertiginous both in its style and in the elemental power of its story. Few novels deserve to be called 'mythic', but Chigozie Obioma's The Fishermen is certainly one of them. A truly magnificent debut." (Eleanor Catton, author of The Luminaries [Man Booker Prize])

What listeners say about The Fishermen

this is such an incredibly written, and poignant story. the world building was so fulfilling and the characters were all so much more than i could’ve hoped. still in tears but will likely read again.

This was a very well written book! I laughed, cried, laughed again! I doubt I would have enioyed it half as much if I read it. The narrator did an excellent job! Now I wanna listen to all books narrated by Chukwudi!
overall, this was totally worth the purchase!

I totally loved it. The storyline was very enthralling. I was totally entertainment and, having grown up in Nigeria myself, it brought back old familiar memories. fantastic read.

This is a lovely book, sad and funny (more sad than funny), but so spirited and passionate. I felt totally involved in the lives of the characters. The author's use of language is just exquisite and the narrator's reading of it is perfect. Highly recommended.

I'm kind of stumped how to talk about the awesomeness of this Lit-Fic book about boyhood. The best I can do is: Read this. It has Mortal Kombat and evil river spirits, and it will break your heart.

Shows how one incident can change your life forever. It was griping to the end. Really enjoyed the narrator's voice.

Was the ending inevitable?

This book is set up as a parable, and maybe (according to the author) a political allegory about British colonial rule and tribal differences.
Essentially the plot hinges around a prophecy by a local madman. Four brothers' response to this prophecy form the body of the book.
Reminding me of A Chronicle Of A Death Foretold there is an inevitability of their actions.
I know it was the point of the book, but I experienced frustration in how their responses to the prophecy are so self destructive and how they so easily surrendered to them.
This is a very thought provoking and challenging book.
I recommend it.

The narration is superb. I would have missed out a lot of I’d read instead of listening. The story embodies all the emotions and turmoil families encounter. Good climax.

This is perhaps the most well written book I have ever read. Not necessarily my favorite book because of the sadness and brutality of the story, but the story is so well told. The writer is a masterful word crafter. The utter beauty of the turn of phrases and the imagery is stunning and powerful.
The author painted a picture of the Nigerian culture of the 1980's and 1990's with the story of one family who loved their sons and carried dreams for their futures in the satchels of education, discipline, faith, and close knit family and community. The family's struggle to juggle living in a culture that held tightly to both superstition, tribal traditions and the modern world.
The narrator did an excellent performance in rendering the voices of different characters.
I highly recommend this book in any format.

What made the experience of listening to The Fishermen the most enjoyable?

I couldn't stop listening, trapped by the amazing narration of the writer. The job well done by the reader.

Longer than it needed to be

The overall book was dark. There were moments or details that were not needed. I felt those details caused the book to be longer than it should have been even after moments of climax. The ending was the shortest part of the book. Felt unfinished considering all the unnecessary big words and descriptions that took up a lot of the storytelling. I had to speed it up to get through it. I wanted to really like this book. Was relieved when it ended.