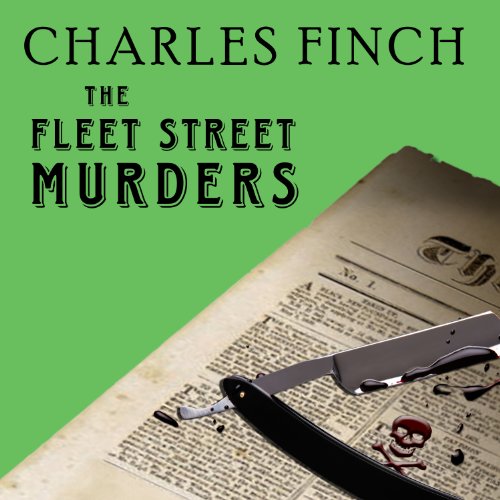 Written by: Charles Finch
Narrated by: James Langton
Try for $0.00

It's Christmas, 1866, and amateur sleuth Charles Lenox, recently engaged to his best friend, Lady Jane Grey, is happily celebrating the holiday in his Mayfair townhouse. Across London, however, two journalists have just met with violent deaths - one shot, one throttled. Lenox soon involves himself in the strange case but must leave it behind to go north to Stirrington, where he is running for Parliament. Once there, he gets a further shock when Lady Jane sends him a letter whose contents may threaten their nuptials.

In London, the police apprehend two unlikely and unrelated murder suspects. From the start, Lenox has his doubts; the crimes, he is sure, are tied. But how? Racing back and forth between London and Stirrington, Lenox must negotiate the complexities of crime and politics, not to mention his imperiled engagement. But as the case mounts, Lenox learns that the person behind the murders may be closer to him - and his beloved - than he knows.

"With its vivid evocation of Victorian England and an appealing protagonist, this is a worthy addition to a fine series of historical whodunits." ( Booklist)

What listeners say about The Fleet Street Murders

Ah, that's what I need...to relax with a cuppa and a mystery!

The operative word is "relax". A "cozy" mystery it is. This one fits the bill entirely!

The time is before motor cars and telephones. The place is Britain. The "amateur" detective (Charles Lenox) is running for Parliament but not in London where he lives next door to his best friend and love of his life, Lady Jane Grey. They are recently engaged though they've known each other since childhood. Just before taking the train to the district he hopes to represent, two high ranking journalists are murdered on their doorsteps. His asked to handle the case but cannot. He does concede to follow the case via newspapers and telegrams.

This give us three mysteries: who killed the journalist? will he win against local businessman? how's he going to handle both effectively!?

After listening to two of Mr. Finch's books, I'm adding him to my wish list for the times when I need lighter fare.

Enjoyable, but not my favorite (Trigger Warning)

Trigger Warning: book contains a family going through a miscarriage

First, I really am enjoying this series. I enjoy the writing and the characters. Sometimes I need this historical, quiet kind of mystery. I think so far in this series that the characters come first and the mystery second and while that's not right for all my moods, it is lovely when it is.


This particular book is, in my opinion, not as strong as the previous two. I don't recommend skipping it because each book in the series builds on the last but the fact remains that much of this book is centered around political ambitions and while I didn't hate it, I also had picked it up looking for a mystery and in large part that was not what I got.

I did however enjoy the building on Charles' life. The addition of a helpmeet continuing from book 2, the relationship between himself and his servants and friends and family. I will say that I am increasingly irritated the two regular female characters in these books, even by Lady Jane, which is not what I want.

In the first book she is described as calm and sensible...but has an appearantly out of character breakdown about a person she knew briefly having been killed. I can imagine how awful it would be to have someone you know even briefly murdered, so I'm not criticizing the response just pointing out it's described as out of character, because in the second she is repeatedly described as sensible and steady and reliable....and, in another out of character moment, is obviously keeping secrets and upset about it and the secret when revealed is so underwhelming that I can'tfathom why it was one.

So when we get to this third book, we are told once again how practical and reasonable and such that she is and she once again has an "out of character" moment of reactionary behavior in which she is troubled that she doesn't know Charles well enough to marry him (after having known him and been best friends and lived next door since childhood, and not after any change in behavior on his part, but because their mutual friends who have had a tempestuous marriage from the first introduction of the first book are fighting again).....I am really not too impressed with her.

The other female, a person named Toto, is encapsulated very easily. Asked her opinion on a pleasure trip to Ireland (a thing which would have been luxury and rarified indeed in this time when class distinction was even more separated by privileges and money then now) her response is to say "Too many potatoes". I understand her character is meant to be adorable in the way a small child insisting on a peice of candy is supposed to be cute but, given that this is less than 20 years after the great famine in Ireland destroyed so many lives and that the comment is absolutely typical of the character, the overall effect is that there aren't many reasonable females in this series so far.

this one, in short, is a little slow. It's pleasant and I did enjoy it but it did not rivet me or make me feel a burning desire to move on to book 4. the females are consistently disappointing and was it is a pleasant ittle time killer, essentially

Another lovely addition to a very good series.

I neglected to mention the reader in my review of book two, he is very good, soothing and correct in his pronunciation and clear. Bless you, dear reader, and EXCELSIOR!

can't wait for the next book!

I am in love with this writer. The stories within stories keep me coming back

Gave up a third of the way in. The story wasn't very compelling and I couldn't find a reason to care about whodunit.

The main characters and their development gets more interesting with each book. The plot is intricate, yet still plausible.
If you like a mystery that is suspenseful enough to hold your attention, but not morbid or vulgar, you will enjoy this series.
The narrator is perfect!

One of the better mystery novels I have read.
The author kept me entertained and hooked on the plot all the way through.

Superb in all aspects! The history so interesting the characters so believable, the excellent narration! Waiting to hear the next …

I really like Finch books, but this reader is so dry with a perpetual cadence that literally puts me to sleep while I listen.