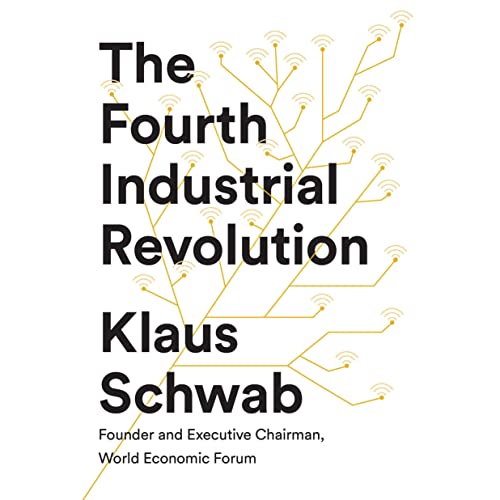 "This book is essential reading for corporate leaders, policy makers, and citizens interested in navigating the challenges and understanding the opportunities which lie ahead thanks to the impact of emerging technologies. Clearly, the profound shifts happening will leave no business model untouched and no society unshaken. Klaus Schwab reminds us of our individual and collective power to ensure that the fourth industrial revolution is a far more sustainable, empowering, and inclusive one than the last three." (Muhtar A. Kent, chairman of the board and chief executive officer, The Coca-Cola Company)

World-renowned economist Klaus Schwab, founder and executive chairman of the World Economic Forum, explains that we have an opportunity to shape the fourth industrial revolution, which will fundamentally alter how we live and work.

Schwab argues that this revolution is different in scale, scope, and complexity from any that have come before. Characterized by a range of new technologies that are fusing the physical, digital, and biological worlds, the developments are affecting all disciplines, economies, industries, and governments and even challenging ideas about what it means to be human.

Artificial intelligence is already all around us, from supercomputers, drones, and virtual assistants to 3-D printing, DNA sequencing, smart thermostats, wearable sensors, and microchips smaller than a grain of sand. But this is just the beginning: nanomaterials 200 times stronger than steel and a million times thinner than a strand of hair and the first transplant of a 3-D printed liver are already in development. Imagine "smart factories" in which global systems of manufacturing are coordinated virtually or implantable mobile phones made of biosynthetic materials.

The fourth industrial revolution, says Schwab, is more significant, and its ramifications more profound than in any prior period of human history. He outlines the key technologies driving this revolution and discusses the major impacts expected on government, business, civil society, and individuals. Schwab also offers bold ideas on how to harness these changes and shape a better future - one in which technology empowers people rather than replaces them; in which progress serves society rather than disrupts it; and in which innovators respect moral and ethical boundaries rather than cross them. We all have the opportunity to contribute to developing new frameworks that advance progress.

"Only organizations driven by purpose and values will be fully able to shape and benefit from the seismic technological, social and economic transformations underway. Klaus Schwab compellingly outlines why all of us must work to ensure that the fourth industrial revolution has at its heart the stakeholder principle, ensuring that the benefits of transformation are as much a public good as a private gain. This book is required reading for my entire leadership team." (Marc R. Benioff, chairman and chief executive officer, Salesforce)
"In The Fourth Industrial Revolution, professor Klaus Schwab puts forth a thoughtful framework for leaders to meet the challenge of maximizing the benefits of the profound technological, social, and economic transformation reshaping society. Drawing on over four decades of bringing together governments, private sector, and other parts of civil society, Schwab starts a wide-ranging discussion on how we can help to ensure that the fourth industrial revolution drives progress for humankind."(Sheryl Sandberg, Facebook COO and founder of LeanIn.Org)

What listeners say about The Fourth Industrial Revolution

Important Story that Puts Me To Sleep

The message contained in this book is very important and I believe the author is extremely qualified to broach it, but I must admit that the way it is read, I am rarely able to stay focused on listening. The voice is clear enough, but it is so methodical that it puts me to sleep.

Secondly, because there are a lot of subheadings obviously contained in the book, it's hard to tell what is the start of a new topic or chapter and what is simply a sub-heading of a topic already under discussion.

Listened to it at 1.40x speed. Any slower and it would have dragged on. Great topic, great information, great when ingested quickly.

It is a thought provoking book but nothing too informative beyond what we already know. And the reader tries to sound dramatic like it’s a documentary on National Geographic.
I’d recommend it as a read because it’s very short otherwise I’d suggest skipping.

in a word: Huzzah!

An absolute must read.

Welcome to the future, you'll find the exits here, here and here.

No sure the point

This book is a summary and what is happening. It doesnt teach you anything. One would have to be buried under a rock to not see what it describes. The author presents himself as an expert but anybody watching the news regularly can deduce his same insight. I found it a thorough waste of time. The narrator’s constant aggrandizing entonation fatigues the mind and I will be sure to stay clear of any other titles narrated by him.

A Book of Brilliance and Ignorance

This is a compelling book of innovative thinking that entices the reader towards an oasis of potential new opportunities (if you already live in a world of opportunity). In addition, it is a book of ignorant thinking, devoid of the true impact on human experience for over half of the world’s population. Rather than being guided by love and unity, this book promotes the illusion of happiness through economic and financial equity, completely ignoring human potentials that cannot be exploited.

To the World Economic Forum- Economics is not the only lens from which the world should be led.

Friendly reminding :
On August 15th, 1971, the decoupling of dollar from gold was supposed to be "temporary".
You will own nothing and be happy.

overall good narration and great content. can be a little dry at times, but must keep mind open to understand where our economies are going if we don't do something about it. this is a blueprint for tomorrows market economy

I thought it would be an interesting book about the future, but instead it was just a creepy man talking about how he plans to manipulate the little people like chessmen.

Would you consider the audio edition of The Fourth Industrial Revolution to be better than the print version?

Good summary of the next wave of innovations feeding the "fourth industrial revolution," but maybe it was just bad timing that I recently finished the book "The Industries of the Future" by Alec Ross which I thought was a better book covering similar topics.

These guys must have gotten a dollar for every time they said "Fourth Industial Revolution". Hard to take, especially in audiobook format.

Would be better in paperback

The content in this is great, but a large portion of that content is in the appendices and they're really not well suited to an audiobook.

Klaus Schab is not an author by trade. He's an economist. I get that, but economic lingo, summaries, repetitions and lists are hard to get through. Even taken into consideration. Content is sometimes interesting, sometimes predictable. Don't expect the hidden agenda of the w.e.f. either, if that's why you're tuning in.