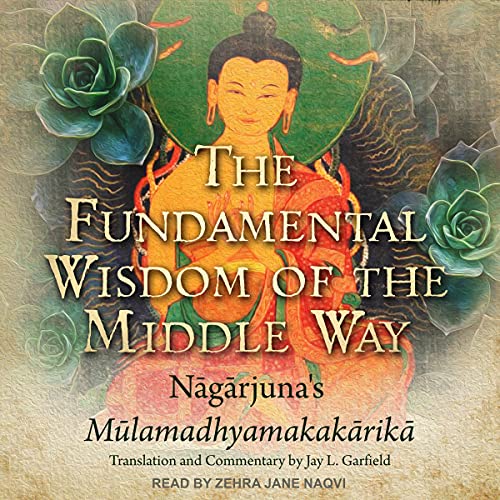 The Fundamental Wisdom of the Middle Way

The Buddhist saint Nāgārjuna, who lived in South India in approximately the second century CE, is undoubtedly the most important, influential, and widely studied Mahāyāna Buddhist philosopher. His greatest philosophical work, the Mūlamadhyamikakārikā - read and studied by philosophers in all major Buddhist schools of Tibet, China, Japan, and Korea - is one of the most influential works in the history of Indian philosophy.

Now, in The Fundamental Wisdom of the Middle Way, Jay L. Garfield provides a clear translation of Nāgārjuna's seminal work, offering those with little or no prior knowledge of Buddhist philosophy a view into the profound logic of the Mūlamadhyamikakārikā. Garfield presents a superb translation of the Tibetan text of Mūlamadhyamikakārikā in its entirety and a commentary reflecting the Tibetan tradition through which Nāgārjuna's philosophical influence has largely been transmitted. Illuminating the systematic character of Nāgārjuna's reasoning, Garfield shows how Nāgārjuna develops his doctrine that all phenomena are empty of inherent existence, that is, than nothing exists substantially or independently. He offers a verse-by-verse commentary that explains Nāgārjuna's positions and arguments in the language of Western metaphysics and epistemology and connects Nāgārjuna's concerns to those of Western philosophers.

What listeners say about The Fundamental Wisdom of the Middle Way

Wish i could get a refund.

I am truly sorry to admit that the Narration is so unpleasant in pitch and cadence that, after several attempts to endure, I stopped listening to a book i really wanted to have read to me.

The shrill narration makes this completely unlistenable. Very disappointed , I had to return. A shame.

Paradoxes everywhere. Dense. Emptiness is empty. For me describing emptiness of emptiness in words are like cutting the branch I am standing on - the branch are the language/words. Words are main part of the empty boxes. Basically says that only consciousness somehow "is". Everything is a simulation and nothing really exists and stuff. 2000 years old and still brilliant.

for the well versed

This is not a book for your average reader. It is very detailed and full.of jargon. Yet the philosophy of the middle way is intriguing. worth the effort in my opinion.

This book and commentary are very interesting. The commentary is very helpful with the sometimes difficult to understand textual jargon for those of us who are not deeply steeped in Middleway philosophy. I found the points quite intuitive, despite the technical philosophical language and reasoning. I would definitely recommend it for anybody willing and wanting to go deeper into Buddhist thought.

if you can handle it, you should read it. it is like Euclidean geometry in the way it starts with axioms, their staying beliefs, then through logical argument expounds in the consequences of all things and flows through the finite and infinite. Jay L. Garfield's consolidation of the ideas into a more comprehensible read for modern readers is an absolute gem.

I wish to express the highest praise for those who brought this text to audio. Easily one of my favorite releases from thee audible catalogue. This release provides limitless insight - and this wisdom grows with every repeat listen. For those who are seeking clarity - this release is the clear gold standard by which all future efforts will be measured.