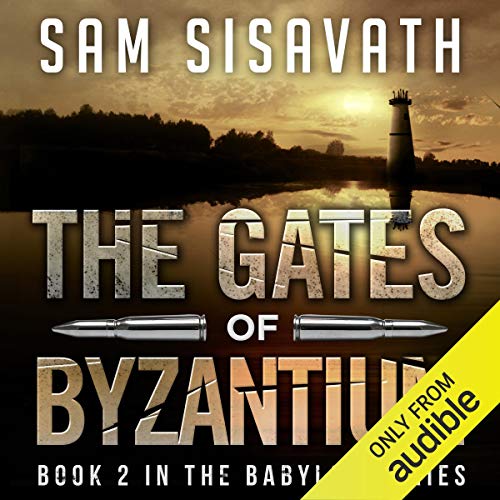 The Gates of Byzantium

Man is no longer at the top of the food chain.

The Purge has devastated the globe, turning much of humanity into night-dwelling, bloodthirsty creatures (dubbed "ghouls" by the survivors), while small pockets of remaining humans have managed to carry on.

With the loss of their sanctuary, Will and his small band of survivors are forced to seek shelter. Following the call of a mysterious radio broadcast, they make the treacherous journey to Louisiana, where an island might hold the key to survival.

Along the way they meet new survivors, clash with new enemies, and renew old acquaintances that have been forever altered. Collaborators - humans working with the ghouls - are more dangerous than ever, and the ghouls have begun a new phase of their domination.

Will learns that a larger war between survivors and ghouls is raging in the rest of the country, but before he can join the fight, he must first ensure the continued survival of his group at all costs.

Where the Purge ends, the Gates beckon...

What listeners say about The Gates of Byzantium

The exciting continuation to the Babylon series

What did you love best about The Gates of Byzantium?

The first book in this series started a strong endeavor in world building, while never deviating from the importance of character development. Gates of Byzantium continued on the path of creating a complex, in-depth exploration into a brilliant conceptualization of a post-apocolypic zombie world.

What other book might you compare The Gates of Byzantium to and why?

I would hesitate to compare this book to others. Sam Sisavath has done a phenomenal job of creating an original story, and I believe he has succeeded to the degree of crafting a unique saga that, while comparable to elements of other books, is best considered in its own context.

I was pleased with Adam's performance with all of the characters, and really could not single one out as a favorite.

Who was the most memorable character of The Gates of Byzantium and why?

As with character performance, I did not feel one character was more memorable than the rest-- each character contributes a unique facet to the overall story.

While there are a number of "zombie books" out there, I would highly recommend this series for its novel take upon the genre. You will find that the plot never dulls as you progress through the story arc, and while some events are predictable, each book will surprise you with a new twist.

Another great novel from Sam.!

The first novel Purge of Babylon really captured my imagination. All the res of the following series is just as captivating. I can see and feel the scenes. Sometimes you get a great story in the first book of the series and then it loses momentum. This isn't the case with the Purge of Babylon series. They are all equally exciting. Doesn't feel like some of the cookie cutter series I've seen. If you haven't yet read any of his novels download the preview and you'll be hooked like I was.

Yes, I have encourage co-workers to escape into this world that Sam has created.

the believability of the whole thing. It keeps you hooked

Will, Danny, Blane and Keo

If you could take any character from The Gates of Byzantium out to dinner, who would it be and why?

What did you love best about The Gates of Byzantium?

Will........he gives his all to protect the people with him

Danny...Adam gave Danny a lot of humor, as depicted in the book..Danny is the funny one...Adam reads it that way...I laughed out loud at times

Who was the most memorable character of The Gates of Byzantium and why?

Gaby...you see how much she grows

I have this whole series, I am not one for Audible, but the way Adam tells the story is so good

Every bit as good as the first book!

Worried it wouldn't be as good as the first book. But I was definitely not letdown. I really enjoyed the fact that this author does not mind killing off a main character. I could do without all the love stories though.

I really enjoyed the first book. This one wasn't as good in my opinion. Not much really happened. I always like hearing what Will and Danny are up to, but the other characters weren't as interesting and the ghouls were almost absent. I need more "blue eyed ghoul" back story. Next book I guess.

Where does The Gates of Byzantium rank among all the audiobooks you’ve listened to so far?

While Gates of Byzantium is the first audiobook from audible that I listened too I would rank it fairly high.

What was one of the most memorable moments of The Gates of Byzantium?

I dont find any particular moment in itself memorable but several moments and those being the banthering between our two spec-ops boys...specialy Danny's Bad humor :D.

Have you listened to any of Adam Danoff’s other performances before? How does this one compare?

This is the first whole Adam Danoff Book I listened to.

Loved this book too!

This book was very good I Am looking forward to the audible book 3!! Hope it comes out soon! You