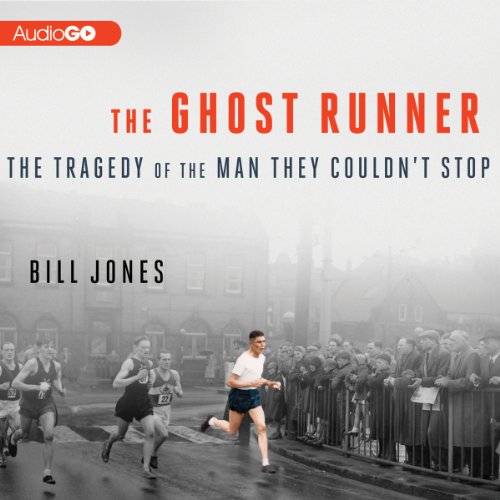 The mystery man threw off his disguise and started to run. Furious stewards gave chase. The crowd roared. A legend was born.

Soon the world would know him as “the ghost runner", John Tarrant, the extraordinary man whom nobody could stop. As a hapless teenage boxer in the 1950s, he’d been paid £17 expenses. When he wanted to run, he was banned for life. His amateur status had been compromised...forever. Now he was fighting back, gate-crashing races all over Britain. No number on his shirt. No friends in high places. Soon he would be a record-breaker, one of the greatest long-distance runners the world had ever seen. This cross between Once a Runner and Chariots of Fire tells the heartbreaking story of this remarkable individual.

“An astonishing story of staggering grit and determination.” ( The Independent, London)
“Jones has unearthed and told quite brilliantly the tragic story of a man condemned not only by authority but also by his own stubbornness.” ( Sunday Times, London)
“A terrific story - a comic-strip hero made flesh.” ( Daily Mail)

What listeners say about The Ghost Runner

The story, the performance and the detail it is born out is fascinating, but for my liking, overdrawn. Even at an audio rate of 1.25-1.5x the narration sometimes seemed lengthy. Even so, it is a title I am grateful to have discovered and enjoyed. It is a history unlike any other and creates a lasting legacy not only for runners and sports enthusiasts, but also all who prize the enduring nature of the human soul, not only for sport, but more aptly for justice and an immortal purpose beyond our mortal coil.