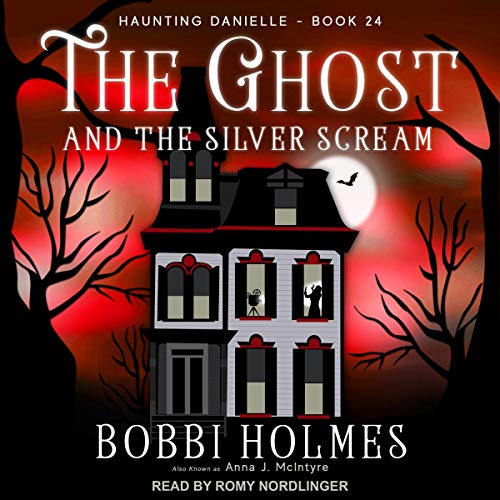 The Ghost and the Silver Scream

Hollywood descends on Marlow House in preproduction for the movie adaptation of Walt's best-selling novel, Moon Runners. Hoping for inspiration, they found death instead.

There's a murderer loose, and as the body count increases, secrets are revealed - and it starts to get a little crowded with all these new ghosts hanging around.

What listeners say about The Ghost and the Silver Scream

I look forward to the next one, hope it's soon!

I love this series, I suggest reading them in order. These books are lighthearted, fun cozy mysteries, the perfect thing to keep you cheered up in hard times, it's too bad they wont put them on kindle unlimited to make the set more affordable. I love all the characters in this story, especially the animals, and I love the relationship between the mean old lady and the pit bull Honey, would love to see more about that.

5/5 stars---a great addition to the series

Romy Nordlinger makes each book a delight to hear. AND I don't know how you do it Bobbi.--the characters, Marlow House with the location on the ocean in the NW just makes each story pop. I LOVED book 24 and am now awaiting book 25--------No spoilers to ruin this one for any listener.

I'm really starting to wonder about other peoples' reviews. I'm up to Chapter 17 so far and completely HATE this book. The synopsis is completely misleading. It's not scary either. About 10 minutes of the first 8 chapters is plot development. The rest is all completely unrelated drivel! Why do 3 - 4 chapters need to be dedicated to a freaking baby that has absolutely nothing to do with with the plot development. In fact, how exactly does a ghost feed, burp and change a diaper? So incredibly STUPID. I will NOT be finishing this book.

Murderer of the Silver Scream

Loved this Haunting Danielle book, interesting storyline. I still can't stand Kelly and Joe even more than the neighbor Pearl. I love this series, looking forward to the next one. Excellent audible narration.

enjoy the book, only flaw is all the characters roll their eyes, couldn't a different reaction be used?

but on a lighter side, many of these books have been funny, teary and just plain enjoyment.

I'm on book 24. I've loved the story lines but so many instances where the narrator misreads the delivery of lines. Examples: reads a statement as a question, sentences that should be read with inflections on certain words for effect are flatly delivered, and I couldn't count how many times it was clear the speaker had changed but she continued narrating as first speaker. It really seemed as if she hadn't preread the text or maybe she herself did not comprehend the dialog between characters.

More mystery and intrigue in this one. She sloves one mystery one starts another. Always leaves you wanting more.

I love this series and generally it's very consistent. However, this time around there were a couple of places where the characters stepped out of character. Police Chief and Danielle. I hope the series isn't getting ghost writers. 😕

Still absolutely loving this series. I’m still not a fan of Kelly. Joe should break up with her. She’s nosey, bossy, naggy, and abusive. I. Real life she would make me cringe. But the majority of the characters I absolutely love.

The Ghost and the Silver Screen is a funny and entertaining cozy mystery . I love the characters and how the story ends. I look forward to the next book.