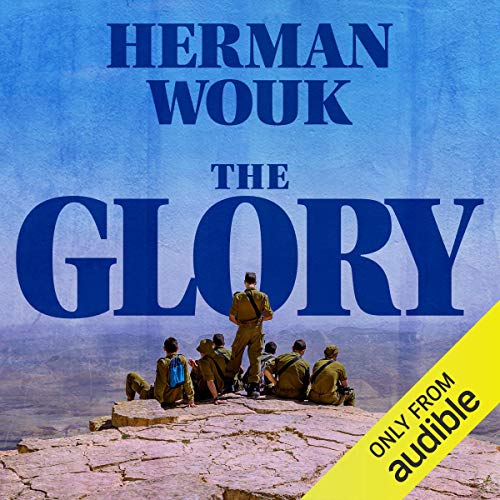 The Glory plunges immediately into the violence and upheaval of the Six-Day War of 1967 - and continues the dramatic story of Israel’s struggle for survival. A sprawling, action-packed novel, Wouk takes listeners through the terrors of the Yom Kippur War, the famous Entebbe rescue, and the airstrikes on Saddam Hussein’s nuclear reactor - ending with the final hope for peace. Illuminating the inner lives of real Israeli leaders - including David Ben-Gurion, Golda Meir, Moshe Dayan, and Ariel Sharon - with both insight and compassion, Wouk tells the story of Israel’s struggle to exist with an authoritative, gripping style that demonstrates not only the broad significance of this time in history, but also its personal impact on those who lived through it.

About the author: Herman Wouk is one of the most widely-read American authors in the world. His books have been translated into 27 languages, and many of his works have become best sellers. He is perhaps best known for The Winds of War and War and Remembrance, an exhaustively-researched two-part historical series telling the story of World War II from the perspective of two fictional families whose lives were irrevocably changed by the war and the Holocaust. Sixteen years in the making, the epic involved extensive archival research including travel for research to England, Germany, Italy, Poland, and Israel. The Winds of War and War and Remembrance were adapted for television in a 30-hour series that won the 1989 Emmy Award for Outstanding Miniseries and was, according to ABC, “the most watched television show in history.”

Born in New York City to Russian-Jewish parents, Wouk graduated from Columbia University and started out working as a comedy writer for Fred Allen’s radio show. After the attack on Pearl Harbor in December 1941, he joined the Navy, serving in eight Pacific invasions and earning several battle stars. During his service in the Pacific he had turned to writing, like Lieutenant Keefer in The Caine Mutiny, for an hour or two before dawn. After his discharge in 1946, Wouk finished his first novel, which became a Book-of-the-Month Club selection, and he soon followed up with the international best sellers The Caine Mutiny and Marjorie Morningstar.

Wouk won the 1952 Pulitzer Prize for fiction for The Caine Mutiny. He has also been awarded numerous academic honors, including a degree from the Hebrew University in Jerusalem. In January 2001, UC San Diego established the Herman Wouk Chair of Modern Jewish Studies, and in 2008 he was given the first Library of Congress Lifetime Achievement Award for the Writing of Fiction.

What listeners say about The Glory

if you have any interest in the history of Israel, read this book and its companion " The hope". I followed most of both books, tracking then for historical accuracy as I listened. I was impressed! Masterly performed by Mark Ashby.

The Glory is the 2nd book in a 2 book series, the 1st called The Hope. Both of these books provide a journey from the beginning of present day Israel through the 40th anniversary. Characters Herman Wouk created in this series are interspersed with real life characters who have been crucial to Israel's history. Historical novels are a great way to inspire people to learn history, especially when they are well written and thoroughly researched. Mr. Wouk is very good at both. It seems as if the Jews have been the targets of abuse and violence for at least the last 2,000 years. Many eastern European Jews, especially in Russia, lost their homes and villages as both Tsarist governments and Soviet governments drove the Jews out. Many began emigrating to America, while many others emigrated to their 'Promised Land.' However, what the Nazis did to the Jewish peoples throughout Europe during World War II provided the inspiration and strength to rise up and create a State with a promise to one another of 'never again.' Creating the State of Israel began with a violent struggle to survive against enormous odds by Arab peoples determined to kill all the Jews in Israel. The same struggle has been repeated through various attacks and wars on Israel and continues to this day. Often, the only friends Israel has had has been the United States. Nevertheless, Israel exists today because Israelis have stood up to every struggle against all odds. I believe Israel and the Jewish people are the most incredible country and people on earth. That's my personal opinion, and in today's world of 'political correctness', my opinion is not popular. Despite 2,000 years of ongoing persecution, they refuse to be wiped out. Many people around the world hate the Jews and Israel, not a new thing for Jewish people. I strongly believe that much of this hatred cannot even be explained. Much of this hatred is taught by parents and grandparents, as well as government leaders, basically propaganda programs of hatred, racism and/or creating a target so a country's citizens will blame the Jews for their misery, rather than their own inept and corrupt leaders. We have always needed and revered our story tellers. They tell us our history, the story of who we are and where we came from. Even how we got to where we are. Mr. Wouk has done an incredible job of that with these 2 novels. I recommend anything written by Herman Wouk, but especially 'The Hope' and 'The Glory'.

Just finished listening to The Hope and The Glory by Herman Wouk. A perfect way to become totally wrapped up in the amazing founding of the state of Israel. This story never ceases to inspire and amaze me.

Herman Wouk is a master in telling the Jewish Experience

Herman Wouk portrayed theJewish experience in securing the promised land with power and poignancy. He tells the story in simple enough terms that a non-military expert can get a sense of the struggle while using enough military jargon to make it real. I love the personal stories he builds around! Hetman Wouk is one of my favorite authors! (I was hooked after Winds if War!)

I especially liked that he wrote about a time in history that I remember. I saw the headlines but now I have a better grasp on what happened.

I wish it was longer! Wouk's tales of Israel's early formation is spell binding. Wouk got a lot of inside stories and created fictional characters to bring them to life. I will listen to the Hope and the Glory again.

One minor historical nit to pick

I was in the 82nd Airborne Division during the 1973 Yom Kippur war. We were on alert (at Ft Bragg NC) not Europe. We were packed & ready to go up against the Soviet Airborne divisionS... What young fools we were.

Right up there with Winds of War and War and Remembrance . I was reluctant to listen to The Hope and The Glory as I thought it might be too much about Israel. It wasn't even though it was all about Israel. I couldn't stop listening.

too much history..too little story

This was 80 % history with fictional and real characters involved in resl history.There was overly excessive battleground scenes.Overall there was very superficial character developement.