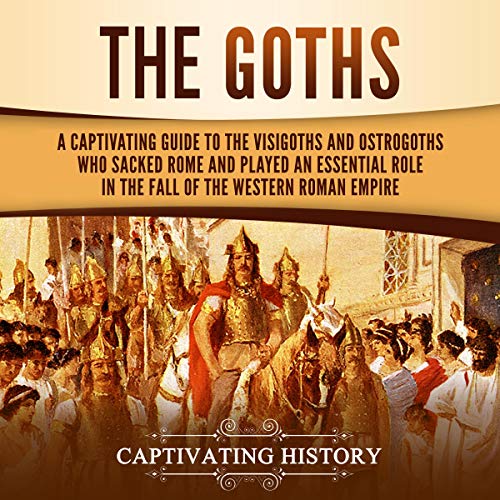 A Captivating Guide to the Visigoths and Ostrogoths Who Sacked Rome and Played an Essential Role in the Fall of the Western Roman Empire
Written by: Captivating History
Narrated by: Randy Whitlow
Length: 1 hr and 50 mins
Categories: History, Europe

If you want to discover the captivating history of the Goths, then keep reading....

When J. R. R. Tolkien was writing his best-known work, The Lord of the Rings, between 1937 and 1949, he drew inspiration from various sources, with the largest well of inspiration being European folklore. However, according to some sources, he would also use real-life historical figures and base his characters on them. Take Théoden, for example. Théoden was an aging king of Rohan, who, after Gandalf the wizard helped him strip the yoke of Grima Wormtongue, rode into battle and died being crushed by his horse.

The men picked him up and carried him into battle, nonetheless, singing praises to him and shedding tears. Scholars claim that Tolkien based Théoden on a real-life king who also died by being trampled by his troops’ horses but who was known for his bravery and who dealt a mighty defeat to a superior foe in the process.

That king was Theodoric I, the battle was at the Catalaunian Plains, and the king himself was a Goth.

In this book, we will delve into the fascinating world of the Goths with a scientific lens, exploring everything we can about how they came about, where they lived, what they did, and how they died off. We will look into the nitty-gritty details of their everyday life, as well as some major historical events that were affected by Goths of any variety. Do strap yourselves in - there are quite a few of those.

In The Goths: A Captivating Guide to the Visigoths and Ostrogoths Who Sacked Rome and Played an Essential Role in the Fall of the Western Roman Empire, you will discover topics such as:

So if you want to learn more about the Goths, scroll up and click the "Buy" button!