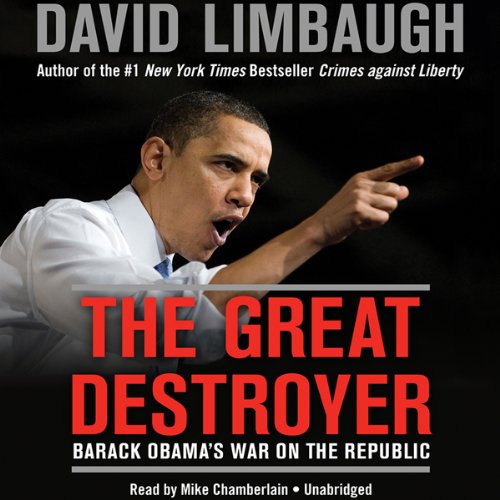 Written by: David Limbaugh
Narrated by: Mike Chamberlain
Try for $0.00

In his number-one New York Times best seller Crimes against Liberty, David Limbaugh penned a damning indictment of President Barack Obama’s misrule during his first two years in office. In this blockbuster book, Limbaugh sets his sights on the remainder of Obama’s presidency, revealing the president’s latest crimes against liberty.

Exposing Obama’s counterfeit image as a champion of bipartisan compromise, Limbaugh relates, in shocking detail, how the president resorts to class-warfare demagoguery to advance a stunningly ideological agenda. We must drastically change course, Limbaugh argues, or else our country will fall into an abyss that could take generations to escape.

Controversial, compelling, and original, The Great Destroyer ingeniously picks up where Crimes against Liberty left off. It is Limbaugh’s most powerful book yet.

About the author: David Limbaugh is a New York Times best-selling author, a lawyer with the Limbaugh Firm, and a nationally syndicated columnist. In addition to his journalism and law work, he frequently appears on top-tier television and radio programs, including Hannity, Mark Levin, Laura Ingraham, and his brother’s show, Rush Limbaugh. He lives with his family in Missouri.

“In The Great Destroyer, David Limbaugh shows how Barack Obama has plundered our nation’s finances, dismantled our defenses, trampled on our Constitution, and punctured the American dream. A must-read book on the Obama administration’s shameless pillaging of America.” (Sean Hannity)
“My friend David Limbaugh has written the best book about the worst president in American history. If anyone reads this book and still votes for Barack Obama, he should have his head examined.” (Mark Levin, nationally syndicated radio talk show host)
“The Great Destroyer reads like a terrific political thriller about an administration hell-bent on bankrupting its own nation and undermining its national security. The fact that it’s a true story about our own country should disturb and alarm every reader.” (Vince Flynn, number-one New York Times best-selling author)

What listeners say about The Great Destroyer

A Bit Overwhelmed With The Volume of Information..

I've heard much of what is written but not in such a condensed manner. An onslaught of 'need to know' material. Next listen I will keep pen and pad within reach. Recommend.

Would you listen to The Great Destroyer again? Why?

Maybe, this book has a lot of information in it. Lots to absorb.

Great points, but gets bogged down

What did you love best about The Great Destroyer?

The well thought out arguments as to why Obama's policies have ruined this country.

If you’ve listened to books by David Limbaugh before, how does this one compare?

What does Mike Chamberlain bring to the story that you wouldn’t experience if you just read the book?

Even tone voice. With some of the petty remarks made toward Obama you could misinterpret the tone, but Mike present it in a non-emotional way.

How much of a joke the Obama administration is

This book could have been better and shorter if it kept to the legitimate arguments and points. Many times, it builds to quick jabs or remarks that don't benefit the story.

If you could sum up The Great Destroyer in three words, what would they be?

Must read if u want to be informed and understand what u r voting for. We r at a crossroad and even if only 10% of this book is accurate it is devastating.

Amazing how much corruption goes on in government!

What made the experience of listening to The Great Destroyer the most enjoyable?

Easy to listen to and understand

Almost depressing, hearing about all the crap that goes on in government and polotics.

I don’t recommend this one

Unless you love Barack Obama this is not the book for you. I did not enjoy it at all, sorry I spent a credit purchasing it!

What would have made The Great Destroyer better?

Overwhelmingly filled with too much information.There should have fewer claims and a better presentation by the author.

Would you ever listen to anything by David Limbaugh again?