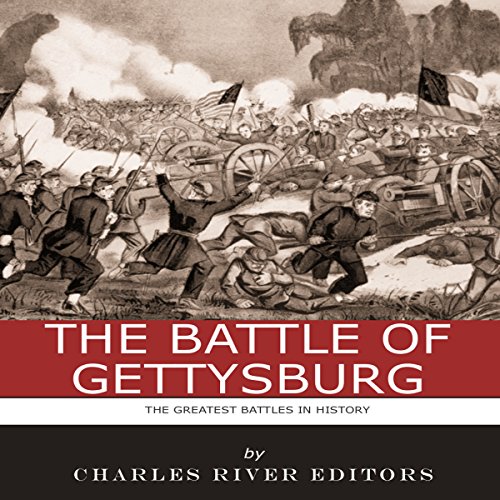 The Greatest Battles in History

The names of history’s most famous battles still ring in our ears today, their influence immediately understood by all. Marathon lent its name to the world’s most famous race, but it also preserved Western civilization during the First Persian War. Saratoga, won by one of the colonists’ most renowned war heroes before he became his nation’s most vile traitor. Hastings ensured the Normans’ success in England and changed the course of British history. Waterloo, which marked the reshaping of the European continent and Napoleon’s doom, has now become part of the English lexicon. In Charles River Editors’ Greatest Battles in History series, readers can get caught up to speed on history’s greatest battles in the time it takes to finish a commute, while learning interesting facts long forgotten or never known.

Without question, the most famous battle of the American Civil War took place outside of the small town of Gettysburg, Pennsylvania, which happened to be a transportation hub, serving as the center of a wheel with several roads leading out to other Pennsylvanian towns. From July 1 to 3, Robert E. Lee’s Confederate Army of Northern Virginia tried everything in its power to decisively defeat George Meade’s Union Army of the Potomac, unleashing ferocious assaults that inflicted nearly 50,000 casualties in all.

The first day of the battle would have been one of the 25 biggest battles of the Civil War itself, and it ended with a tactical Confederate victory. But over the next two days, Lee would try and fail to dislodge the Union army with attacks on both of its flanks during the second day and Pickett’s Charge on the third and final day. Meade’s stout defense held, barely, repulsing each attempted assault, handing the Union a desperately needed victory that ended up being one of the Civil War’s turning points.

After the South had lost the war, the importance of Gettysburg as one of the “high tide” marks of the Confederacy became apparent to everyone, making the battle all the more important in the years after it had been fought. While former Confederate generals cast about for scapegoats, with various officers pointing fingers at Robert E. Lee, James Longstreet, and James Stuart, historians and avid Civil War fans became obsessed with studying and analyzing all the command decisions and army movements during the entire campaign.

The Greatest Battles in History: The Battle of Gettysburg comprehensively covers the entire Pennsylvania campaign, analyzes the decisions made by the battle’s most important leaders, and explains the aftermath of the Union victory and the legacies that were made and tarnished by the battle. You will learn about the Battle of Gettysburg like you never have before, in no time at all.