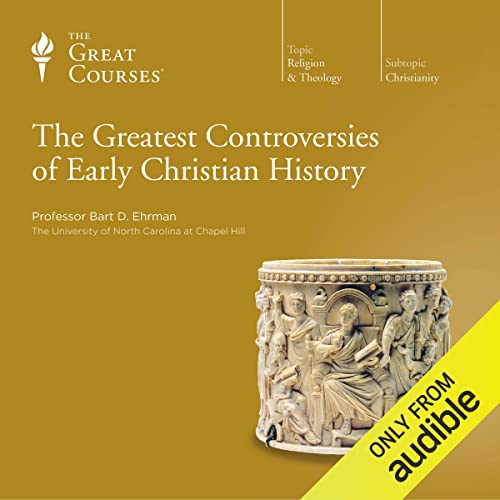 Without the presence of Christianity, our world would be considerably different. Whether we view it in religious, social, or political terms, Christianity has deeply and integrally influenced the Western worldview and way of life. Yet, throughout Christian history, compelling controversies have existed surrounding the faith's first three centuries, when it grew from a persecuted sect into a powerful religion. These controversies bring into question many commonly accepted beliefs about Christianity.

In this course, an award-winning professor and New York Times best-selling author offers a penetrating investigation of the 24 most pivotal controversies, shedding light on fallacies that obscure an accurate view of the religion and how it evolved into what it is today. In each lecture, you'll delve into a key issue in Christianity's early development:

You'll delve into the conception of the meshiach (messiah) in Jewish tradition, and the basis for the core Christian claim that a suffering messiah was predicted in the Jewish scriptures. In grasping Paul's role in the early faith, you contemplate the key differences between the teachings of Jesus himself and the Christian view of his death and resurrection. And you trace the ambiguous role in early Christianity of the Jewish scriptures, and how these books came to be accepted as the Christian Old Testament. Explore these and other intriguing questions in this unique inquiry into the core of Christian tradition.

What listeners say about The Greatest Controversies of Early Christian History

Not what you’d expect

When you read the title you might expect this to cover the great controversies that were addressed by the councils of the church in the early centuries of her life.

Instead you get a series of lectures discussing qualms and questions that have only become relevant in the modern period.

Still interesting, but hardly the “greatest controversies” of that period. They are curiousities and historical inconsistencies at best.

A remarkable look at early Christianity.

This is the second set of lectures I have listened to by Professor Bart D. Ehrman. The lectures were excellent. My time was well spent in familiarizing myself with the various controversies such as was Jesus really born in Bethlehem (unlikely) or that contrary to what many modern readers think, the Book of Revelation is not unique and the subject was the Roman Empire.

This book is not for all people - some have no interest in ancient history and for others, their faith may make this too sensitive a topic. Ehrman states early on:

"In these lectures, we will approach controversies of early Christianity not from the perspective of faith but from the perspective of history. We will not deny or affirm Christian belief or the approach to the Bible by faith; instead, we will take the approach of the historian— one who tries to reconstruct what actually happened in the past without assuming any particular faith commitments.

You may or may not feel that the conclusions we reach about controversial issues will have any bearing on your faith. But the fact that so many issues have been in dispute in Christianity from the earliest days of the faith is interesting in itself. What makes Christianity so subject to controversy on so many points? Why have those issues persisted for so long, and why have they so often been divisive? As we look for ways to resolve the disputes that are the subject of this course, we’ll look for answers to those fundamental questions, as well

Ehrman is an erudite scholar of Biblical history, especially as it pertains to early Christian history. This course was so interesting and informative that when I finished it, I started it again. If you are interested in the topics in the above description, listen to this course.

Note: This is not a devotional course. It covers the topics from the perspective of a historian, not from a theologian.

The professor has a strong bias against Christianity that shows in how he selectively uses material. He frequently tries to place the Gospels according to Matthew, Mark, Luke and John in the same category as clearly spurious non-canonical gospels that were written much later and rejected by the Church.

He completely ignores the widely-accepted Q Hypothesis in order to claim that the Canonical Gospels were based purely on oral tradition rather than on any pre-existing written sources. Therefore he accepts the writings of Josephus while rejecting anything in the Canonical Gospels as "not historical".

He also uses the lack of literacy in the ancient world as an argument to support the idea that the early Christian Church could not have had written records, but many historical people dictated to scribes, and anyway he accepts several of Paul's letters as historical. Why would Paul be writing to churches if no one could read?

Dr. Ehrman presents excellently researched information, and thorough details about what we know about the New Testament and apocryphal works. The audiobook is worth listening to for the facts it presents.

I would advise caution when considering Dr. Ehrman’s own conclusions about the character of historical figures. He is sometimes prone to speculation. Here are some examples:

1) He speculates that 5% of the Roman Empire was Christian at the time of Constantine, when no statistics exist from the time period. He then states that Constantine promoted Christianity out of a belief it was be a good way to unit his empire. Only a fool would look at a belief system not practiced by 95% of the population, and believe that imposing that system on them in opposition to their own customs would be an effective unitary action. So either Constantine was a fool, or Dr. Ehrman’s statistical speculation underestimates how many Christians there were at the time.
2) Dr. Ehrman speculates that the Jesus’ Procession into Jerusalem never really occurred because he assumes Pontius Pilate would have arrested Jesus on the spot. Dr. Ehrman later acknowledges that Pilate sought to avoid public disturbances. The crowd waving Palm Fronds (symbols of Jewish independence) would likely not have simply stood by as Roman soldiers arrested the man they were greeting. Dr. Ehrman assumes Pilate was too hard-headed to have stopped himself from ordering an instant arrest, while simultaneously acknowledging Pilate would have wanted to avoid a disturbance rather than cause one. The instant arrest would also have required Pilate to know Jesus was coming in advance, and had men ready for him. Rather than think through all the angles of this event, Dr. Ehrman dismisses it as fiction with no proof one way or the other.
3) Dr. Ehrman presumes a conversation between Judas and Pilate took place where Judas informs Pilate that Jesus had privately claimed to be King of the Jews. Pilate then uses that as justification to execute Jesus. No record of such a conversation exists; it is Dr. Ehrman’s invention. On other occasions in his narrative when early Christian writers make a claim, Dr. Ehrman dismisses their claim because there are no records to back up their claims. So suppositions are only acceptable to Dr. Ehrman if he thinks of them himself.

Errors in reasoning aside, the audiobook contains much useful information. I encourage you to listen to it, just be mindful of when Dr. Ehrman expresses his own opinion.

Everything you ever wanted to know about Christian controversies is here in this excellent course from The Great Courses.

A course like this is exactly what is needed to break the stranglehold that religious fundamentalism still holds on certain aspects of American life. Greatly encouraged!

If you are already familiar with Dr Ehrman's work, nothing really stands out here. It's excellent work, but most of the information can be found in some of his other works.

This series of lectures explores some of the biggest controversies of early Christianity, ranging from the serious questions (do we still have the original New Testament?) to the borderline crazy (did Jesus have a twin brother?)

If you take it with a grain of salt, it's an interesting journey through some of the most hotly debated issues of the faith.

And the Controversies Go On!

The Great Courses offers several lecture series by Bart Ehrman and I have enjoyed each one I've encountered. He has great command of the subjects of early Christianity, and his approach is clear and understandable.

Ehrman begins the course with an explanation of his purpose. Not a religious interpretation, this is an attempt to explore the historical realities and the context in which early Christians lived, told their stories, and advanced their faith.

So the controversies include not only the questions Ehrman confronts about the historical probabilities of the Christian Bible and beliefs, but also about how listeners will react to the approach itself. As a scholar, the Professor challenges areas which most of us have encountered only in a religious context. If the listener's mind is not open to different ways of looking at Christianity, he/she will most likely not appreciate this course.

Anyone willing to listen will learn a lot.

This is a very interesting topic and the speaker is excellent and obviously knowledgeable. There are, however, some flaws in his arguments. At points he uses parts of the biblical text to make arguments that undermine his earlier conclusions. Otherwise, excellent.