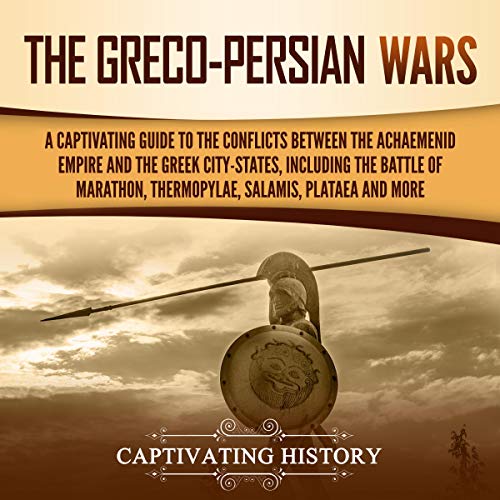 If you want to discover the captivating history of the Greco-Persian Wars, then pay attention....

The Greco-Persian Wars are often portrayed as a battle between good and evil. This is simultaneously an exaggeration and an oversimplification, but there is no doubt that this war, or series of wars, fought between some of the most powerful civilizations of the ancient era helped to plot the course of human history that we have been following up until this very day.

In The Greco-Persian Wars: A Captivating Guide to the Conflicts Between the Achaemenid Empire and the Greek City-States, Including the Battle of Marathon, Thermopylae, Salamis, Plataea, and More, you will discover topics such as:

So if you want to learn more about the Greco-Persian wars, scroll up and click the "Buy" button!

What listeners say about The Greco-Persian Wars

This book is awesome! So descriptive. Awesome! Buy this book to the conflicts between the Achaemenid Empire and the Greek City-States, including the Battle of Marathon, Thermopylae, Salamis, Plataea, and More.

This book is great! Totally recommend it

Excellent book.
Not only factual but quite entertaining to learn about Conflicts Between the Achaemenid Empire and the Greek City-States.

A wonderful book, delightfully written and detailed accounting of the Greco Persian wars, written and described well for history lovers.

I loved learning about the Greco-Persian Wars through the eyes of my school days; the book is filled with incredible detail, cool facts, and even fun word investigations! I especially enjoyed the detailed about the Battle of Marathon, Thermopylae, Salamis, Plataea.

This is very educational and great.

This is very educational and great.
This includes mostly information from Conflicts Between the Achaemenid Empire and the Greek City-States
This book is great!
I totally recommend it to everyone who likes history. The book teaches you a lot and is fun at the same time.

Truly educational for every history lover.

Made by Captivating History for everyone!
Wow! This is very educational and great. This includes mostly information from conflicts between the Achaemenid Empire and the Greek cty-states, Including the battle of Marathon, Thermopylae, Salamis, Plataea, and more, but he was one of the only people recording the Greco-Persian wars.

Lovingly written, this is the perfect book to get yourself inspired to love ancient history. It will also inspire budding writers to see what incredible work can be accomplished. This would be a great addition to school libraries and classrooms.

Great history on the Ancient Greeks

This is considerably the best non-fiction book I had to listen to in many years. Captivating History, does an excellent job of detailing the events, personalities, and consequences of the wars without losing the human element or influence on the world.

This is an exceptional book. It seems the best non-academic book on the subject which I have seen in many years: excellent detail, great descriptions, and a very good bibliography.
It is highly recommended!

Green's love-affair with Heroditus is quite apparent and was a great use to him in this book. I loved it to Actium, and I much love the Greco-Persian Wars. Get this book, and you will not be disappointed. I highly recommend this book