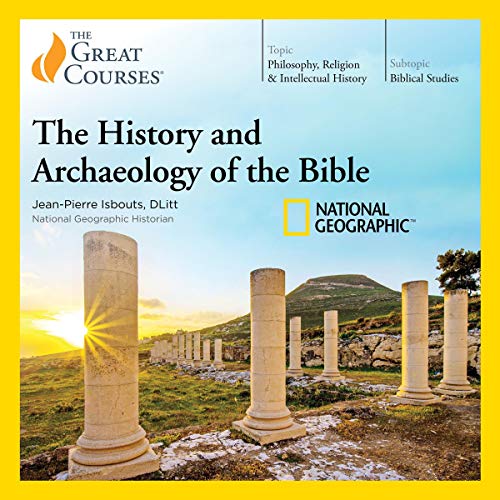 The History and Archaeology of the Bible

The findings of historians and archaeologists open a thrilling world of discovery as they bring their methods and insights to the iconic stories of the Bible. These 24 content-rich lessons take you on a multidimensional journey through the Bible, from Genesis to the Crucifixion, through the lens of the latest historical and archaeological research.

Deeply fascinating for those who have an interest in the Abrahamic faiths, ancient civilizations, and archaeology, The History and Archaeology of the Bible throws fresh and revealing light on the iconic scriptures that - in far-reaching ways - have shaped our world.

What listeners say about The History and Archaeology of the Bible

I was disappointed that Isbouts began with a greater acceptance of the historical value of scripture than other historians I've read. He admits to being a practicing Christian -- there's certainly nothing wrong with that and I appreciate his candor at the outset. But his faith eclipses his science. He accepts that Hebrew stories of creation, the flood and others echo existing, earlier myths. He concludes this was deliberate so hearers would be starting from shared ground in discovering the one, true god. (Far more likely, those folktales were just appropriated -- long after the originals -- and repurposed.) He states that it has been determined that the technology of Noah's time would have allowed the creation of a boat the size of the Ark. Perhaps. But could it then have held all of those creatures? Was the flood indeed worldwide? Those questions are left hanging. But if the need for the worldwide animal rescue was factually unnecessary, what use was the boat even if it was achievable? Isbouts' presentation style is very good, even in audio-only. But Cynthia Chapman's "The World of Biblical Israel" is a much more clearheaded and facts-based, though still very respectful, exploration. Isbouts presents far more apologetics than science.

Not done as a audiobook that well

Lot of clips from a video series that doesn't translate to audio only well. Other than that its ok, didn't learn alot of new info compared to other lectures but it was enjoyable. Jean is a good speaker and that definitely helped, his little added details were nice.

I've never been disappointed with The Great Courses up till now. This talk had many minor inaccuracies and several major assumptions, all leading the apparent theme of the series which is that pretty much the whole Bible is fiction. The speaker professes to be Christian, which is fine; however, I cannot understand how someone can base their faith on what they consider to be mythology.

A lot of odd, occasionally illogical, theories - with the author offering nothing to substantiate them.

I learned so much.

I loved the things I learned about the Bible and how it was written. To me, it does little good to study the scriptures without knowing the background of where, how, why and by whom they were written. This book fills in so much of that information. But I found myself wanting more. Luckily this author has written several books on related subjects. I look forward to reading them as well.

Not a Bible Believer.

Book tries to say God is made up like most of the rest of the ancient gods were. I didn't get anything out of what little I could listen to.

I have read quite a bit on this topic. Nonetheless, this book surprised me with a lot of very good information that was new to me, and increased my understanding of some of the more obscure and puzzling events in scripture. I plan to listen to it repeatedly until I get all the information I can absorb. Also, the narrator was pleasant and clear.

I’m no expert and I have no axe to grind. Isbouts is delivering derivative info so we can hardly credit him with a good story so I have only his delivery to rate and he is incredibly annoying on multiple levels. First of all he has written his “lectures” for an 8th grade audience or worse. He talks down to the audience in a sort of Disney-fide way, trying to soothe the feelings of literalists while appealing to the secular humanists. The result is insufferable. And he pronounces various ancient language words with what seem like fake affected accents, do we have such a command of the accent these words were uttered with?

Overall it feels fake and inauthentic and vanilla-ized.

I've listened to over 50 great courses and this is in my top two.

Preacher not a scientist

Irritating basic assumption that "we all believe in Bible" shines through. If you are after archeological and historical science like me, don't bother with this one.