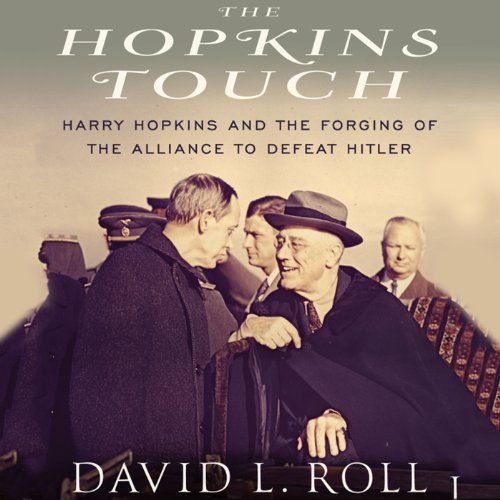 Written by: David Roll
Narrated by: Fleet Cooper
Try for $0.00

The Hopkins Touch offers the first portrait in over two decades of the most powerful man in Roosevelt's administration. David Roll shows how Harry Hopkins, an Iowa-born social worker who had been an integral part of the New Deal's implementation, became the linchpin in FDR's - and America's - relationships with Churchill and Stalin, and spoke with an authority second only to the president's. Gaunt, nearly spectral, and malnourished following an operation to remove part of his stomach, the newly widowed Hopkins accepted the president's invitation to move into the White House in 1940 and remained Roosevelt's closest advisor, speechwriter, sounding board, and friend nearly to the end.

Between 1940 and 1945, with incomparable skill and indefatigable determination, Hopkins organized the Lend-Lease program and steered the president to prepare the public for war with Germany. He became FDR's problem-solver and fixer, helping to smooth over crises, such as when the British refused to allow an invasion of Europe in 1943, enraging Stalin, who felt that the Soviet Union was carrying the military effort against the Nazis. Lacking an official title or a clear executive branch portfolio, Hopkins could take the political risks his boss could not, and proved crucial to maintaining personal relations among the Big Three.

Beloved by some - such as Churchill, who believed that Hopkins "always went to the root of the matter" - and trusted by most - including the paranoid Stalin - there were nevertheless those who resented the influence of "the White House Rasputin". Based on newly available sources, The Hopkins Touch is an absorbing, substantial new work that offers a fresh perspective on the World War II era and the Allied leaders, through the life of the man who kept them on point until the war was won.

"A masterful portrait of one of the most fascinating political figures this country has ever produced. David Roll has vividly captured the infinite complexities and extraordinary influence of FDR aide Harry Hopkins -- part playboy, part reformer-- whose peerless diplomatic efforts in World War II helped cement the Anglo-American alliance and pave the way for the Allies' victory." (Lynne Olson, author of Citizens of London: The Americans Who Stood with Britain in its Finest, Darkest Hour)
"Mr. Roll's use of previously unavailable materials enables him to present a far more comprehensive story. It's a must-read for anyone interested in the period. A truly magisterial biography." (The Washington Times)
"Displaying a strong grasp of the intervening half-century of historical scholarship, delivering a strong and clear-eyed appraisal of Hopkins's personal life, and demonstrating considerable narrative talents." (Wall Street Journal)

What listeners say about The Hopkins Touch

Hopkins - the glue of the tripartite coalition

I am in fact amazed to what extent I enjoyed this book. How many times have I said I don't like books that focus on military strategies? This book does focus on war strategies, but I was never bored. Hopkins and Roosevelt together planned how to best win the war. Roosevelt relied on Hopkins more than any other individual. They discussed every step. Hopkins resided in the White House for more than three years; he was at Roosevelt's beck and call 24 hours of the day from 1940-1945, unless he was in the hospital. He attended almost all the important conferences except for Potsdam; Roosevelt was dead and Hopkins had resigned at that point. The discussion of when the channel crossing should be set was fascinating, along with the decision to invade Northern Africa. Hopkins was the glue that kept the Anglo-American and Soviet tripartite coalition together. How did he do this? He could read people. He was an expert negotiator.

This could all be very boring, couldn't it? All I can say is that it wasn't. It was in fact fascinating, probably because you come to recognize the idiosyncrasies of Stalin, Churchill, FDR and Hopkins too. Small amusing details are thrown in: Churchill in his dressing gown. Did I hear correctly that it was pink?! The guy was always drinking and then there was the funny moment at the a conference in Quebec when Churchill remarks to Hopkins that the water tasted funny. Hopkins replied that was simply because it lacked any trace of whiskey. Parts are exciting - when the Iowa battleship was torpedoed by friendly fire! The entire American delegation was on that boat. The book is interesting, clear, amusing and well worth your time!

It is remarkable what these two men, Hopkins and Roosevelt, achieved. Two men who were seriously ill. Roosevelt died in April 1945 and Hopkins February 1946. This is something to consider - how hard these two pushed themselves! Hopkins’ digestive system seriously malfunctioned.

So what could have been improved? What is lacking? There is only to a lesser extent information about the youth of either man. The book is instead about the war and what jobs Hopkins held before the war, thus giving him the training necessary for the job, but do you learn to read people? Isn't that an ability that you are born with? Neither is the focus on the respective men's illnesses; their medical illnesses are stated; how they conquered/ignored their disabilities is instead the main issue. Other family members are discussed, but not in depth, just enough to make the reader feel acquainted with them or to make you laugh about particular habits! Maybe I would have liked to know more of Hopkins personal reflections…..but perhaps this is quite simply not known!

The narration by Fleet Cooper was OK. I would have preferred that he less dramatized his reading, and he had a peculiar pronunciation of the word material. Every time he said that word I jumped; the emphasis on "al" was all wrong! Heck, these are not serious problems, none of them.

One other complaint: the author all too often stated that so and so "must" have thought that, and he "most probably" did that. Find out and tell me. I don't want a bunch of suppositions. In 1941 Hopkins was in England during the Blitz, and yet it is implied that he was carousing out about town; I thought he must have been sleeping. He was terribly ill, tired and worn out! Sounded like a bit of an exaggeration!

My complaints are not significant. What is important is that this book was extremely interesting and had a good mix of humor and quirky details. It keeps your attention and makes what could easily be a big bore fascinating.

The history you think you know, but...

There is always another "angle ". This one is as enlightens, revealing and riveting beyond the mundane anticipation from what ostensibly seem to be a biography of a minor player on the stage frequented by giants

What an Interesting Story

Seldom does one come across a book so well written and performed. I knew little of Harry Hopkins and his role during the Franklin Roosevelt administrations. David Roll put together a wonderful biography of a very important man: much more so that I ever realized before.

What other book might you compare The Hopkins Touch to and why?

This book falls into the same genre as a Doris Kearns Goodwin book, like A Team of Rivals. She is a gifted and thoughtful writer and Mr. Roll's effort here reminds me of the high quality of her work.

Have you listened to any of Fleet Cooper’s other performances before? How does this one compare?

His narration performance here was outstanding. The quality of the work in the writing always makes a difference in the performance.

There were times when I was actually fearful that Hopkins was close to death and must admit I cried a little. In the end, I'd have to agree with those who assessed him as "Mr. Root of the Matter".

I highly recommend this book and audio performance to anyone who enjoys a great book very well narrated.

I have read or listened to all the major FDR biographies, including Robert Sherwood's great "Roosevelt and Hopkins" and was really looking forward to this book, the first major Hopkins biography in over a dozen years. And it is a very good book, one I will probably end up reading. I say that because Fleet Cooper's voice is completely inappropriate for this material. He sounds like a snide, spoiled, would-be wisecracker, one who wants to put a sly spin on every other line ... which is something totally unnecessary and even unwelcome in a serious work of biography. I tolerated it for the first part, but had to quit after six hours. Very disappointing.

Power behind the New Deal and FDR WWII

A splendid and engaging bio of Hopkins. The audiobook is a dumpster fire of a listen. Ride with mispronunciations and an indiscernible cadence, the narrator is evidences little effort to understand what he reads. Such a shame. After over 200 Audible listens this narrator is the worst. David Roll deserves better

Poor narration. Misprounced “Stalin’s” (huh?) and spoke in an odd nasally way when quoting. Narrative has considerable overlap (includes practically verbatim incidents) as Roll’s book on Marshall. Interesting insights and information about Hopkins, but I give it only a B.

Successful people need to have a strong supporter in their corner. That often behind-the-scenes person is golden. That confidant gives the advice, counsel, rebukes, encouragement, etc. that are needed. Harry Hopkins was one of those priceless confidants. This nation, among others, owes him a debt of gratitude.

David Roll tells the unbelievable story and irreplaceable role of Harry Hopkins during two of the most tumultuous decades of American history. Hopkins' life was dedicated to preserving the nation and to service to his country.

At the misfortune of being rejected for military service in WW1, Hopkins hones his talents to far greater service to his country. His impact during the Great Depression and even more significantly WW2 are impossible to measure. His commitment to FDR was unparalleled.

Hopkins is a role model for those who want their lives to matter to a greater cause.

This is a compelling and illuminating perspective of a great man, how he maintained the glue among the three allied leaders, and a worthwhile read. Yet the Audible performance is absolutely dreadful. Fleet Cooper’s nasal voice to begin with is irritating enough, but then he attributes every dialogue section the same by raising the note of his raspy voice. Churchill sounds like Hopkins who sounds like Stalin who sounds like Churchill who sounds like Hopkins’s daughter who sounds like . . . well you get the picture. Then the mispronounced words. How about a little effort? How about some talent? How about more scrutiny for a more appropriate voice? My gosh, this was one of the worst. I grew so irritated and tired i turned off the Audible and read more pleasantly.