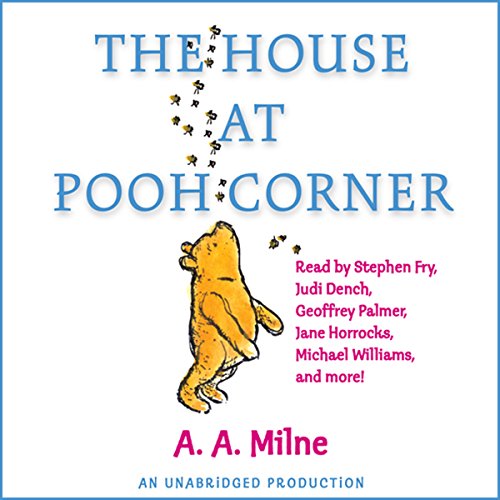 The House at Pooh Corner (Dramatized)

No child should be without these classic tales of Winnie-the-Pooh and his forest friends. In this charming performance by Alan Bennett, originally conceived for BBC broadcast and produced by the world's foremost creators of radio entertainment, Winnie-the-Pooh and his endearing friends come wondrously alive to enthrall and delight even the littlest of listeners.

Winnie-the-Pooh
For Winnie-the-Pooh, Pooh for short, every day is an adventure. Whether he's tracking a wild Woozle with Piglet, finding a tail for Eeyore, or sailing off in Christopher Robin's umbrella, Pooh is always ready to lend a paw to his friends - and always able to turn an ordinary day into an exciting event with his marvelously humorous powers of reason.

The House at Pooh Corner

This story continues the adventures of Pooh and his friends, as Pooh Bear and Piglet endeavor to surprise Eeyore with a new house, Tigger tries out a smorgasbord of breakfasts, Pooh and Piglet hunt down a Heffalump, and more.

Loved it, some of the sound effects were over the top, but otherwise it was an amazing audiobook and I loved it, and I could listen to it over and over and it would never get old.

Would you consider the audio edition of The House at Pooh Corner (Dramatized) to be better than the print version?

I think it was better in our case. We listened while working on projects and the various voices really capture your attention. I have tried reading the story to her before, but who can compete with this cast of voices!

What other book might you compare The House at Pooh Corner (Dramatized) to and why?

These narrators really added to the characters. We love Piglets squeaks and Eeyore's gloominess. Wonderful.

Yes and we did. And then we listened again.. On third time when we bought the next book.

Disappointing - get the Peter Dennis version

I love the Pooh stories and have been reveling in introducing them to my preschooler. Unfortunately, in this audio version the various readers miss the mark on the personalities of the different characters. Piglet comes across pretty well, but Eeyore just seems rather bored, and, worst of all, Pooh sounds downright haughty. That's not right at all!

Our local library had both this one and the version made by Blackstone Audio and narrated by Peter Dennis (available as an Overdrive download). The Blackstone Audio version is so much better as to be incomparable. I'm sorry I wasted my credit on this one! I anticipate purchasing our own Blackstone Audio/Peter Dennis version after the library lending period expires.

A continuation of the the "Winnie-the-Pooh" reading done so brilliantly by Judi Dench et al. A gorgeous audible experience. Do yourself a favor and try this instead of an evening meditation. It is more enjoyable and just as restful. A special kudo should go to Geoffrey Palmer's performance as Eeyore. Sorrowful and self-pitying, but hysterially funny. Almost as good a vocal job as Jane Horrock's Piglet. I hope you love it as much as I did.