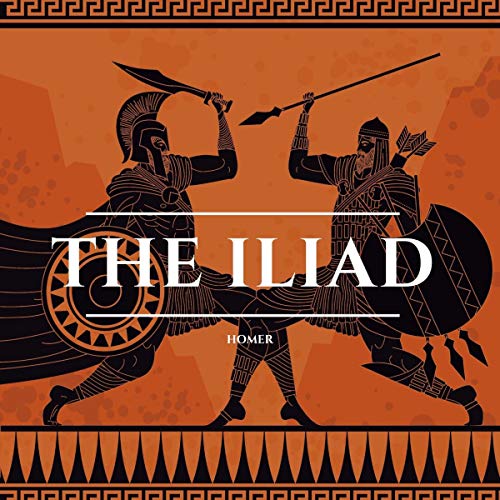 Written by: Homer
Narrated by: Charles Purkey
Try for $0.00

The Iliad is one of the two great epics of Homer, and is typically described as one of the greatest war stories of all time, but to say the Iliad is a war story does not begin to describe the emotional sweep of its action and characters: Achilles, Helen, Hector, and other heroes of Greek myth and history in the tenth and final year of the Greek siege of Troy.

What listeners say about The Iliad

This is not translated from Greek.

I bought a physical copy translated by Robert Fagles, and this audio book is not red from that version from which I purchased.

The translator was not dutiful to the original Greek, having already gotten off track of the dactylic hexameter within the first page. Also, the use of Roman names is just wrong, plain and simple. I thought I was getting Rodney Merrill’s translation (because that’s the version I was looking at on the amazon app in book form), but alas it was not, and is thus improper in its execution in its very inception. If anyone would like to make an audiobook from the Merrill translation let me know, and then please link it to the appropriate page instead of this lacking edition.

Though I have no quarrel with the reader I do take exception to the use of Latin /Roman names for tje gods. This is a common translation error. The original was written in Greek and should not be translated as fro Latin.

The Performance is so dry I can't get to the story

A review requires more than fifteen words, but I can't say more without coming across as cruel. The vocal performance is boring.