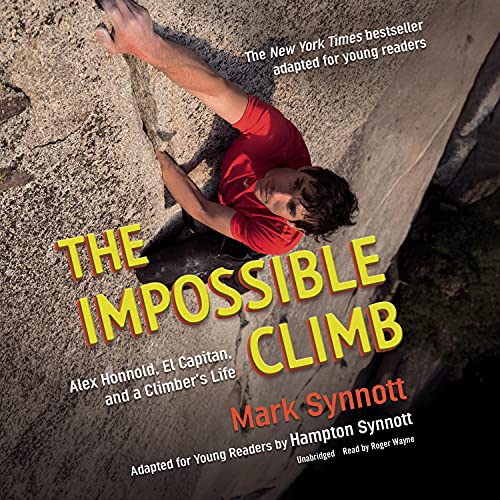 Written by: Mark Synnott
Narrated by: Roger Wayne
Try for $0.00

A middle-grade adaptation of the adult best seller that chronicles what the New York Times deemed “one of the great athletic feats of any kind, ever”: Alex Honnold’s free-solo ascent of El Capitan in Yosemite National Park.

On June 3, 2017, as seen in the Oscar-winning documentary Free Solo, Alex Honnold achieved what most had written off as unattainable: a 3,000-foot vertical climb of El Capitan in Yosemite National Park, without a rope or harness. At the time, only a few knew what he was attempting to do, but after topping out at 9:28 am, having spent just under four hours on this historic feat, author Mark Synnott broke the story for National Geographic and the world watched in awe.

Now adapted for a younger audience, The Impossible Climb tells the gripping story of how a quiet kid from Sacramento, California, grew up to capture the attention of the entire globe by redefining the limits of human potential through hard work, discipline, and a deep respect for the natural world.

What listeners say about The Impossible Climb (Young Readers Adaptation)