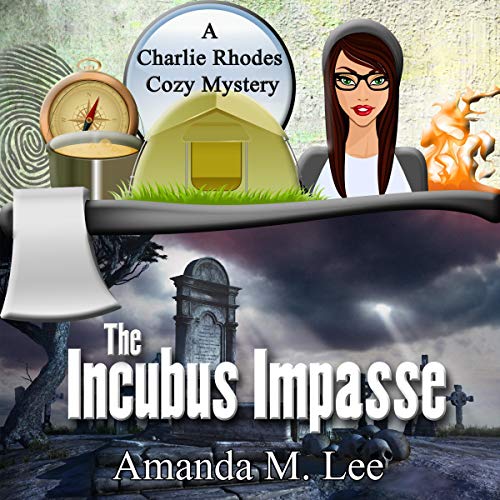 Charlie Rhodes is at a crossroads in her life. Her big secret is out - at least with the most important person in her life Jack Hanson - and now they have to deal with a whole new reality.

Things are going relatively well when the Legacy Foundation is sent on a mission to Charleston. It seems women are dying under strange circumstances: open windows, no immediate sign of violence, locked doors. The leader of their group is convinced it’s an incubus, and even though he was the chief naysayer before, Jack has no idea what to believe given the reality of his magical girlfriend.

It’s a new world and Charlie is excited to embrace it. Jack wants to keep her close while exploring her abilities. They make a fearsome twosome...although there’s danger at every turn.

It seems Charlie resembles the dead women, and even though local police thought they had nothing in common...it seems they actually did. They were bucking for a reality television show and it appears someone in that business may be a murderer.

Charleston is a new environment and Charlie and Jack are embracing a brand new world. Things are going to be fine...as long as they live to tell the tale.

A murderer is stalking Charleston, death is close, and only Charlie can save the day. She’s going to need those closest to her to do it. Luckily, they’re up for the challenge.

What listeners say about The Incubus Impasse

The series is getting darker and that is wonderful. Off to the next book- Woo!

Careful what you wish for

I
This was a great who done it. I love the relationship and how they have grown together. I really enjoy this series. The characters are so entertaining. this story has fear, mystery along with laughs and love!!

Another amazing story. Charlie and Jack are finally together. And they are doing great. The story held my interest. More about Charlie's past is coming up. She just met her brother.

as always another great story by Amanda. this series is amazing. This book sets up the scene for the next story and maybe Charlie will find out more about her past and what she is.

all i can say is... hurry hurry.. write the next one. I can't wait to listen for phase two of the family's plan. I didn't even see that twist coming at the end.. great job!!!

I love that this book gave us more Harley and a chance to see Charlie exhibit some new powers. the big reveal at the end is sure to take us in a new direction. Can't wait!

Really enjoyed this mystery. We also got some great information about the history of the area around Charleston. Interesting from beginning to end. Laura is tipping over the deep end. I love Jack and Charlie (Charlotte). Fun characters, super sweet, but not over the top. I like Millie a great deal, as well as the rest if the crew:Bernard, Chris and Hannah. Laura...not so much. Really enjoying the series. Told from Charlie's POV. Narrator does a great job.

Wow, that’s all I can say, just wow!! Amanda M. Lee has really outdone herself this time. She has created a storyline that took a hold of both my mind and soul.
Jennifer Jill Araya not only gave a wonderful performance, but gave the story the ability to take a hold of me from the first paragraph and grip strongly until the very last word.
I highly recommend this book/audiobook to cozy mystery fans.

I enjoyed the first 3 books but the narrator for the rest of them makes me want to pull my hair out. And I absolutely can’t stand Jack. Keep hoping he’ll be eaten by...anything, lol

great way to relax. I love the series. a witch hiding in plain sight and hunting other paranormals