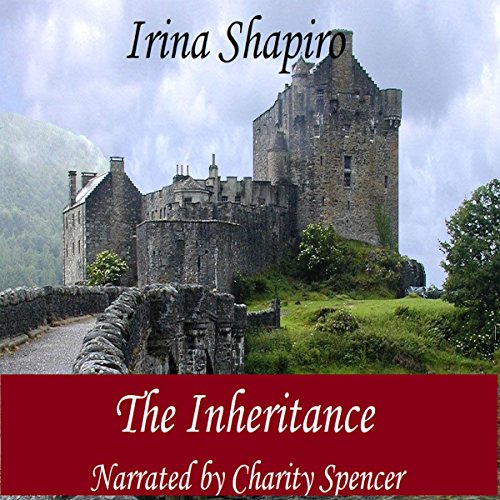 Written by: Irina Shapiro
Narrated by: Charity Spencer
Try for $0.00

Katie Price is baffled when a man claiming to be her grandfather leaves her his entire estate in the Scottish Highlands. The bulk of the estate consists of a thriving whisky distillery and a moldering castle, where the eccentric old man actually lived until his death. The will stipulates that Katie must travel to Scotland and claim her inheritance in person.

As Katie’s stay extends from weeks into months, she uncovers the secret that led to her mother’s birth, and begins to unravel a 250-year-old mystery surrounding the beautiful young wife of the last laird of Clan McBride. According to local lore, Isobel McBride vanished from the castle without a trace shortly after the Battle of Culloden, and some believe that her ghost still walks the battlements at night. A strange dream in Isobel’s tower room leads Katie to Isobel’s hiding place, where she discovers love letters from a man other than Isobel’s husband, his initials being the only clue to his identity.

As Katie begins to unearth the clues to Isobel’s fate, she embarks on a romantic journey of her own and finds a new life she never expected.

Author's note: Due to several complaints, the book has been extensively re-edited as of July 20, 2013.

What listeners say about The Inheritance

Can't finish this book and returning it. The narrator is not good at all. The accents are not there, hard to listen. I was so disappointed, reading the information and some of the reviews I thought OK sounds good, but after listening the story doesn't develop well at the start. Not sure how it ends because I just can't listen to it.

Narration was amateurish,the story kept going back and forth from past to future making things confusing at times.The main characters who I thought were the ones from the future,were merely a side bonus story,which wasn’t much of a story at all and really neither was the older story.All half baked if you ask me.

I was really nervous when I bought this after reading the awful reviews some people wrote. But I am glad that I did listen to this one because it was pretty good. Yes the Scottish accent is bad. However I still found her reading to be well done. I think the woman who wrote the nasty review about the accent has a personal vendetta or something. The story itself is very well done. If your an outlander fan this is a very similar story with a shorter conclusion. Just listen for yourself!

The quest for her ancestry

Great story running two timelines. Love the details, felt like I was right there with them.

Unknown family and a mystery!!! Loved the time slips and moved from one story to other smoothly!!! Charcters are likeable and enjoyed everything about it!!

If not for the narrator...

I read all of the reviews for this book before downloading it- fortunately, I got it on Audible Escape, so I didn’t have to pay for it. It was not a bad book, but the reviews about the narrator were spot on. She was AWFUL! With all the actors available that have authentic Scottish accents, why on earth did they give Charity Spencer this book to read? She might’ve been ok had they just had her read the American characters part. But she put on a fake Scottish accent, and maybe I’ve watched too many seasons of Outlander, but I just couldn’t with this narrator.
If you can get past that, it’s not a bad book; very simple in comparison to other Shapiro texts, but not bad. The story dives into the history of a great family rivalry in the past and how that history drives the current day story. For those of you unfamiliar with Shapiro’s method, she always weaves history with modern day events. If you are a fan of historical fiction (much like Gibaldon’s Outlander) then you might enjoy Shapiro’s works. This is one of her shorter works at just over 5 hours, and the story of the Isobel Grant McBride and Rory McBride makes this worth a listen. In short, if you have Audible Escape and can get this for free, then it’s worth it- if not, pass on it! Check out the Echoes of the Past series, as those are well worth the credit.

Worth the listen! A sweet love story to pass the time!

I’m so glad I didn’t listen to those negative reviews and took the leap to check this out. This was a lovely, quick listen with two intertwined love stories that are sweet and entertaining. I was really cheering for Isabelle and Rory and loved the connection that the past had to the present. The Narrator did a nice job as well!

This was such an enjoyable, engaging short story! I loved relaxing to the tale of Rory and Isabelle and feeling like an Americam tourist in Scotland. ;)

I loved the idea of following 3 stories! I was hesitant because there were several bad reviews, but I fell in love with this story.

You’re following the story of someone who was told her grandfather willed a Scottish castle. She and her family weren’t aware of who the grandfather was so she went to Scotland to learn what everything was about so we follow her story about looking for family clues in Scotland.

The castle was rumored to be haunted so we get to follow the story of what happened to the occupants so many years ago.

As history is uncovered we also get to learn the history of who the mysterious grandfather is.

I loved how everything unraveled and the journey it took to get everyone there.