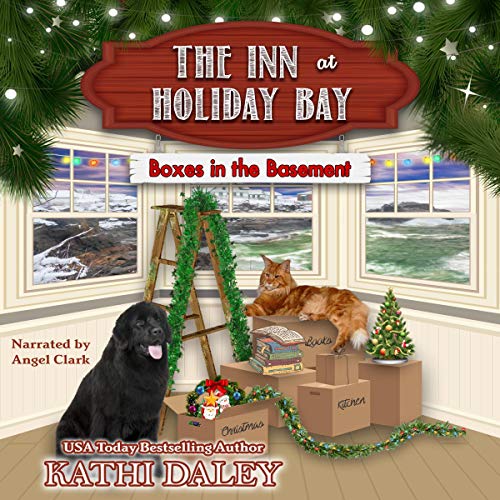 The Inn at Holiday Bay

After suffering a personal tragedy, Abby Sullivan buys a huge old seaside mansion she has never even seen, packs up her life in San Francisco, and moves to Holiday Bay Maine, where she is adopted, quite against her will, by a huge Maine Coon Cat named Rufus, a drifter with her own tragic past named Georgia, and a giant dog with an inferiority complex named Ramos. What Abby thought she needed was alone time to heal. What she ended up with was an inn she never knew she wanted, a cat she couldn't seem to convince to leave, and a new family she'd never be able to live without.

In book 1 of this series, a local girl has been murdered and the small seaside community is up in arms. When Abby finds boxes in the basement of her new home, which seem to provide a clue as to who might have killed the girl, Abby plants herself firmly in the middle of what has turned out to be a complicated investigation. Although Abby isn't a cop, or even a private detective, she isn't unfamiliar with the investigative process. As a New York Times best-selling mystery writer she knows how to conduct research. As the widow of a homicide detective, she knows the questions to ask.

Join Abby, Georgia, Rufus, and Ramos as they help Officer Colt Wilder track down a killer before he kills the next victim in what looks to be a annual spree.

What listeners say about The Inn at Holiday Bay

I downloaded this while in the car. mistake. wish I'd read reviews. the story is fine, expected, the narrator is like a robot with all inflections exactly and oh so annoyingly wrong wrong. driving me crazy. halfway done and will only finish for the author's sake.

Narrator was hard to listen to

This narrator has a cute voice and did well on the various character voices. However, her inflection and emphasis on certain words was so inappropriate for the story that it was hard to listen. She would consistently pronounce I said or he said type phrases as though they were complete new thoughts with exciting new information. There were also other various sentences where the emphasis did not reflect the sense of the sentence. If she can stop inflecting the i saids that way and do a better job of matching her inflection to the sentence meaning I think she could be a good narrator. As it is, I’m going to try to return the book.

I had a hard time listening to this book because the narrator had such an annoying voice. The storyline was pretty good, but I will have to read the remainder of the series instead of listening.

I read this book before it was available in audio form and enjoyed it. I purchased the Kindle book a year or two ago and was delighted a few days ago to see that the first 6 books were now available in audio (I got them all). For some reason ?? though they should have synced with the kindle books they did not...I have run into the same problem with a few others 🤔, plus about 25 of the Perry Mason series that don't sync with the Kindle book. ANYWAY GOOD BOOK SERIES.