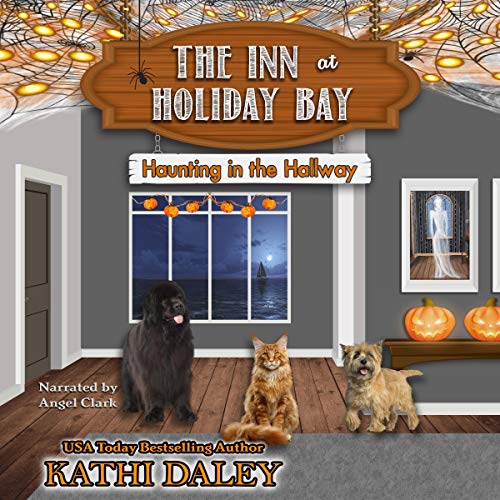 The Inn at Holiday Bay: Haunting in the Hallway

After suffering a personal tragedy, Abby Sullivan buys a huge, old seaside mansion she has never even seen, packs up her life in San Francisco, and moves to Holiday Bay Maine, where she is adopted, quite against her will, by a huge Maine coon cat named Rufus, a drifter with her own tragic past named Georgia, and a giant dog with an inferiority complex named Ramos. What Abby thought she needed was alone time to heal. What she ended up with was, an inn she never knew she wanted, a cat she couldn't seem to convince to leave, and a new family she'd never be able to live without.

In book five in the series, the new bank president, who happens to be the son of the man who founded the community bank, is found dead and buried in his own grave. The man was not popular in the small community after making a lot of changes with his father's passing, and the list of possible suspects who might want him dead is extensive.

Meanwhile, it is October, and the inn is hosting Halloween-themed events. The haunted weekends are just for fun, but when guests report hearing noises in the hallway, Abby wonders if the inn might actually be haunted for real.

What listeners say about The Inn at Holiday Bay: Haunting in the Hallway

I truly enjoy this author. It’s too bad the voice actress is so green. She sounds like a child and has no sense of inflection or pace. Don’t waste your money.