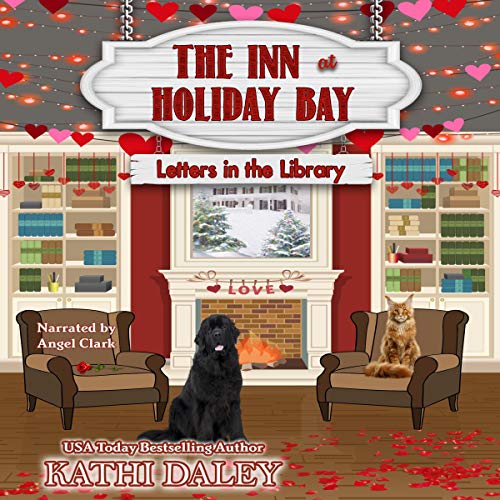 The Inn at Holiday Bay: Letters in the Library

After suffering a personal tragedy, Abby Sullivan buys a huge, old seaside mansion she has never even seen, packs up her life in San Francisco, and moves to Holiday Bay Maine, where she is adopted, quite against her will, by a huge Maine Coon Cat named Rufus, a drifter with her own tragic past named Georgia, and a giant dog with an inferiority complex named Ramos. What Abby thought she needed was alone time to heal. What she ended up with was, an inn she never knew she wanted, a cat she couldn't seem to convince to leave, and a new family she'd never be able to live without.

In book two of the series, Abby finds a bundle of letters which had been written in 1954 in the wall of the library after Lonnie tears it down as part of the remodel. Intrigued by the secret revealed in the letters, Abby and Georgia set out to find the rest of the story.

Meanwhile, Chief Colt Wilder uncovers a new clue relating to the death of a local girl the previous summer. In spite of her vow to focus her time on her writing, Abby finds herself pulled into the tangled web of half truths that may tell a different story than was first believed true.

Join Abby, Georgia, Rufus, and Ramos, as they continue with the remodel on the old mansion, prepare for a busy summer season, and continue to find a new meaning for their lives in the charming small town of Holiday Bay.

What listeners say about The Inn at Holiday Bay: Letters in the Library

The each story is great with characters that carry through all the books. Each one is exciting and keeps your interest. it's hard to quit reading. I thought I would try the Audible but the reader is a monotone with a voice like fingernails on a blackboard. I'll finish the series but I'll read it on Kindle. There are so many excellent readers on Audible to waste money on this one!