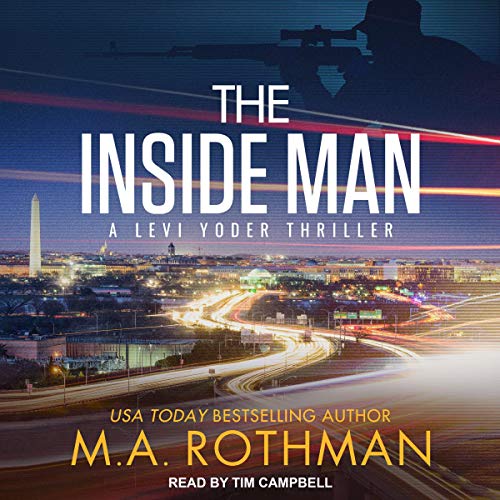 Written by: M.A. Rothman
Narrated by: Tim Campbell
Try for $0.00

As a member of a New York Mafia family, Levi Yoder's role is unique: He's a fixer, a solver of problems, a man whose code puts loyalty above all else, yet he's a man with a conscience.

In the Inside Man, Levi's search for the kidnapped grandchild of a Japanese mob boss plunges him into a world filled with chaos.

When he's falsely accused of a heinous series of crimes, the FBI makes Levi an offer he can't refuse: use his mob connections to help investigate the murders of several undercover agents or find himself in jail awaiting trial, without a way to clear his name.

With the threat of incarceration hanging over his head and the life of a five-year-old at stake, Levi finds himself tracking a serial killer who he fears might lead him to suspects that are very close to home.

Jail or the life of an innocent little girl, Levi's left with no choice.

What listeners say about The Inside Man

Inside, Outside, Either Way, this dude ROCKS!

Rothman takes Yoder to new heights as well as down to pretty deep lows.
Still edgy, still fast-paced, and still awesome!
I need more Levi in my life!

this series is a good read.

ok, you want a good thriller, one that's reasonably realistic, good plot and story in it! well these books have done pretty well by any mesure so far. in what the author has written, that I have read, the level of entertainment has been extremely good.

This is my first book by the author. I couldn't determine what the series first book was; so I just jumped in and started listening. I had a hard time turning off my kindle fire because all of the characters had become very personal to me. I look forward to hearing all of Mr Rothman's books. P.S. I also enjoyed his explanation of the tool's used.
Bruce R.

I was first introduced to MA Rothman in Decipher
This is the third book of his I’ve listened to it’s engaging, entertaining and full of mystery.
Highly recommend. Tim Campbell does an EXCELLENT job narrating.

The continued story of Levi Yoder continues to excite is faced paced from beginning to end.

These days every publicist compares their literary creation to "Reacher" ... Dirk Pitt ... Mitch Rapp - all of whom are well-known outstanding characters.

Mike Rothman's Levi Yoder is "the next Evan Smoak / "Orphan X" by Gregg Hurwitz. That is as high a compliment as I can pay.

If you enjoy "Orphan X" with his gimmicks and coterie of specialists he calls upon ... then you will Love LEVI YODER. Mike assures me that LEVI #3 is on its way. Meanwhile read Perimeter (Levi #1) and this one. Trust me... you will enjoy it!

An Amish guy, turned Mafia hood with 007 skills an

An Amish guy, turned Mafia hood, with a wealth of Chinese cultural experience and 007 skills and sophistication. The tempo of this book kept me interested until the end but it wasn't really what I would describe as a page turner. I put this one in the second tier of my library.

this is the second book in this series. it is just as good or better than the first.