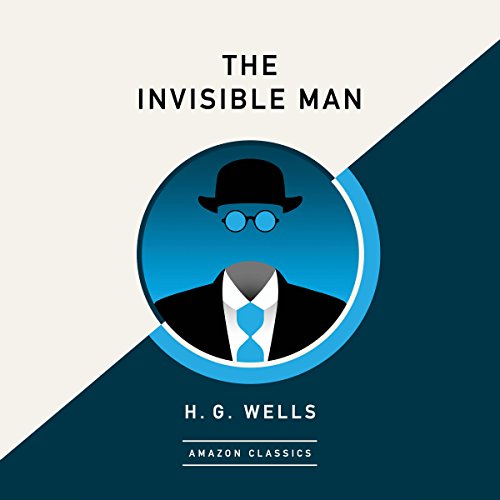 Featured title on PBS's The Great American Read in 2018

Having devoted his studies to optics and refraction, an impulsive scientist named Griffin has rendered himself invisible. Unable to reverse the effects, his struggle to survive grows desperate until he realizes that there are benefits to living out of the public eye. Increasingly isolated, he soon spirals into a life of crime and degenerates into madness. He can't see that he has become his own worst enemy.

Exploring the loss of identity and the willful disappearance of conscience and morality, H. G. Wells crafted one of his most suspenseful and cautionary tales, which continues to intrigue to this day.

AmazonClassics brings you timeless works from the masters of storytelling. Ideal for anyone who wants to listen to a great work for the first time or rediscover an old favorite, these new editions open the door to literature’s most unforgettable characters and beloved worlds.

What listeners say about The Invisible Man (AmazonClassics Edition)

I had been planning on reading the story for decades ever since I was a young boy but somehow I just never did it. I saw that it was part of my prime account so I picked it up and listen to it in my spare time. Although the story is 120 years old and some of the languages no longer used in a way it’s spoken in a story. It is still very very understandable. I would recommend it to everyone who has been thinking about it I just hasn’t done it like myself.

Comments from a reader

This is a good read. It had a good amount of action and, although written in the 1800s, seemed to be a modern novel.

Goal to read as many classics as possible

This story is a good old classic. However, I struggled to finish without upping the speed. Wells definitely put in a lot of effort to include as much description as possible so the plot of the story drags on. I found myself thinking "get to the point" but that's just me. The characters at first are annoying and nosey, and I understand why Griffin is so frustrated with them in the first place. But as the story progresses you see the true extent of his madness come out.

The story was fair, a bit boring from my perspective. It wasn’t slow but I did find my mind wondering in places. The narration was excellent, he did a great job on the different characters. I just didn’t get into the story that much. It was just fair.

truly a classic read with class! I easily visoulized the story while listening! What fun!

Good book..
Not the best ending...
This book needed to be longer in my opinion.

I have seen movies and have read varying renditions of the book. Always entertaining. I'm not completely sold on audible format,yet.