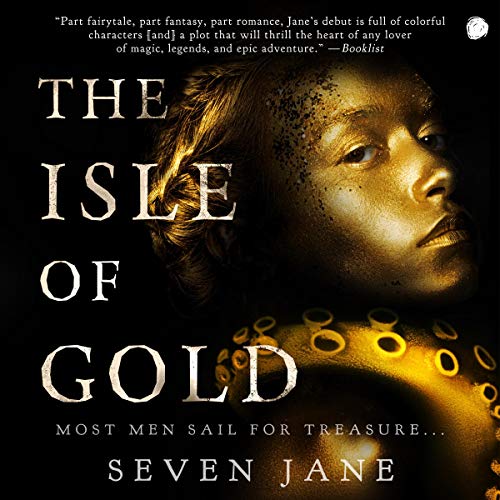 The Isle of Gold

Written by: Seven Jane
Narrated by: Nicole B Dolen
Try for $0.00

The year is 1716 - the Golden Age of the Pirates. An orphan who sleeps in the dusty kitchens of a quayside brothel, Merrin Smith is desperate to unravel the secrets of her past and find the truth about the events that brought her to Isla Perla as a child. Disguised as a sailor, she joins the crew of the pirate ship Riptide, helmed by the notorious Captain Erik Winters. Tenacious and rumored to be a madman, Winters is known as much for his ruthlessness as for his connection to the enigmatic and beautiful proprietress of The Goodnight Mermaid, Evangeline Dahl, who vanished from the island two summers before.

This book is an epic, emotional adventure of two women - one desperate to save herself, and the other determined to be rescued - and the secret which binds them together.

What listeners say about The Isle of Gold

The Isle of Gold is an enchanting high seas adventure. Merrin Smith aka Wesley Rivers aka Merrin Jones is a daring young lady willing to face the dangers in her quest. Merrin isn’t squeamish about shipboard chores or even learning some new skills (like sword fighting). The tale is full of suspense and twists!

While there is much I liked about this book, I did find it a bit cumbersome of the plot to require Merrin to hide her gender. Merrin even brings up other female pirates, but this ship has none. So she risks death if the sailors discover she’s a woman. This trope has been used a lot and because of that, it makes a chunk of the plot very predictable. I knew Merrin would be discovered at some point, that some sailors would be OK with it and others wouldn’t. And I expected some romance to be involved because that what saves women 99% of the time for this trope. Also, most of the story has just one woman in it, Merrin, as we left her friend Claudette behind and don’t come upon another woman until the last bit of the story.

That being said, there are still many suspenseful moments to the tale. The author really has a talent for crafting these small suspenseful moments that lead up to an intense scene. Davy Jones – freaking awesome! I loved how those scenes with him were a perfect balance of acceptance, elemental power, fear, and a deep abiding love. The story as a whole is beautifully crafted. Even though I guessed early on where chunks of the plot were going, I was still pleasantly surprised by some of the small twists near the end. I think these twists will play a big part in shaping book 2 of this series.

I loved the cephalopod scenes near the end – very intense! Do not mess with a sea goddess! 4.5/5 stars.

The Narration: Nicole B. Dolen was the perfect fit for Merrin. I really loved her voice, especially how she captured all of Merrin’s emotions. Dolen also had distinct voices for all the characters and her male voices sounded like men. I really liked the scary, cold voice for the sea goddess and the deeply sad and wise voice for Davy Jones. The pacing was perfect and there were no tech issues with this recording. 5/5 stars.

I received this audiobook as part of my participation in a blog tour with Audiobookworm Promotions. The tour is being sponsored by Black Spot Books. The gifting of this audiobook did not affect my opinion of it.

This is a great Pirate book. Although this not my genre, I decided to download this book, being that it was free. I don’t regret doing so. The story line was a little slow at first, but it quickly captured my attention. The narrator was superb. The different characters really came to life with Nicole talent for voices and accents. I can’t wait for the sequel to this book, and I sincerely hope to have the pleasure to listen to this narrator again.