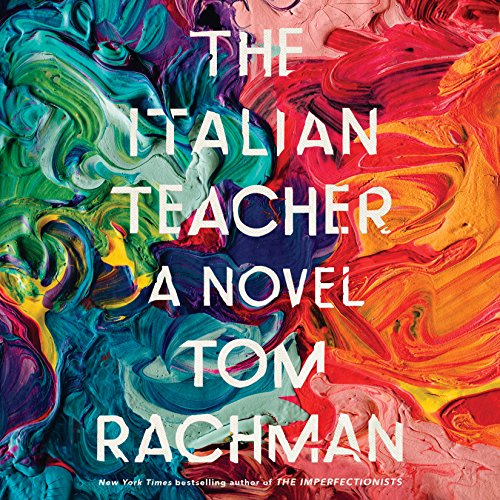 Written by: Tom Rachman
Narrated by: Sam Alexander
Try for $0.00

A sparkling, propulsive new novel from the best-selling author of The Imperfectionists

Rome, 1955. The artists gather for a picture at a party in an ancient villa. Bear Bavinsky, creator of vast canvases, larger than life, is at the center of the picture. His wife, Natalie, edges out of the shot.

From the side of the room watches little Pinch - their son. At five years old he loves Bear almost as much as he fears him. After Bear abandons their family, Pinch will still worship him, striving to live up to the Bavinsky name, while Natalie, a ceramicist, cannot hope to be more than a forgotten muse. Trying to burn brightly in his father's shadow, Pinch's attempts flicker and die. Yet by the end of a career of twists and compromises, Pinch will enact an unexpected rebellion that will leave forever his mark upon the Bear Bavinsky legacy.

A masterful, original examination of love, duty, art and fame, The Italian Teacher cements Tom Rachman as among this generation's most exciting literary voices.

"Captivating dialogue abounds in this entertaining audiobook about a son's efforts to meet the expectations of his father... Narrator Sam Alexander skillfully brings this character study to life using accents, inflections, and the right mix of father-son tension and mutual indignation." (AudioFile)

What listeners say about The Italian Teacher

A douche of a man, but a hell of an artist


I remember reading Loving Picasso, then seeing Surviving Picasso, and then Experiencing Picasso...that is...trying not to let my new found perspective of his soul-sucking ego affect my appreciation of his paintings when I saw them. At first, I didn't picture the battered women or recall their shattered spirits, the suicides, the depression...not while looking at such unworldly talent . But, I wondered about Francoise Gilot, a beautiful young woman and an accomplished artist herself, to whom Picasso said when Gilot told him she was also a painter, [quote]That is the funniest thing I’ve ever heard. Girls who look like you could never be painters.[end quote] She was 21, and the great Picasso was over 60.

How did she survive Picasso?
In the huge shadow cast by such staggering greatness, how does anyone catch and hold enough sunshine to thrive, and not just fade out and blow away?

Rachman, adeptly captures that struggle from the perspective of a child living with a father that is an artist as big as his reputation, a charismatic expressionist known as much for his womanizing persona as his art, Bear Bavinsky. Reminded me a little of Picasso, with all of the narcissism, but without the intentional cruelty. Bear is a better artist than father and a better father than he is a husband, but he is a great painter. Is that enough? The characters in The Italian Teacher will either find a way out of Bear's shadow, or be swallowed into him.

The story begins in Rome where the artist lives with his current delicate-artist-wife, Natalie, and their 5 yr. old son, Pinch. Little Pinch adores his Papa, always experiencing him in the incandescence of his fame. The mother makes pottery under such encouragement from Bear as, *Not everyone is an artist,* and other supportive bon mots. [All those cuts sound so pretty when said with a pat on the shoulder and a wink.] Pinch learns to pity his poor mother, seeing her and her clumsy art only through Bear's disapproving eyes as he brushes by her, off on his way to some opening or gala in his honor, and into the arms of another adoring young sycophant, with cute little Pinch by his side, performing like a well-trained parrot. And so Pinch grows up, an unnourished seedling without individual context or safe harbor, thinking his mother weak and his father nothing less than a god. But Bear quickly moves on to the next event, the next woman he fancies, the next canvas, spreading his charms (and his seed) and eventually totaling a dozen or so wives and 17 children; all whom he loves, skittering about his feet, calling him Papa -- until he doesn't. Once the littles are grown and with needs or wants, Bear moves on abandoning responsibilities to chase fame, leaving another broken family struggling in the wake of his ego.

Pinch stays in the closest orbit to Bear through the years of changing sceneries and families.
As if unable to stand on his own, he bends himself and his life to fit into a relationship with his father, twisting and turning further from his own desires and needs to fit into Bear's. From a child, he had dreamed of following in his father's steps and being a painter -- until his father ridiculed his work. Like a puppy kicked aside, he gathers himself up and settles on the next closest thing he can think of, being a writer/art major, with dreams of writing about his father and his illustrious career. Bear scoffs, giving a hardy laugh at this modified ambition. After telling Pinch his writing is no better than the painting he attempted, he finally growls at the young man, *You work for ME!*

This is the novel's pivotal point and Rachman handles this moment with the turn toward a clever benevolence. *Never can true reconcilement grow where wounds of deadly hate have pierced so deep,* said Milton. Seeds have been planted and Bear will continue to finally encourage something in Pinch. I wasn't a big fan of The Imperfectionists, but I recall the talent of the author. The Italian Teacher struck me as Rachman's better book, even feeling a bit Shakespearean at times. There are weaknesses, plausibility, characters or events that are close to something you recall in history or literature that weaken a strong narrative into an echo, or caricature. But those are teeny little personal gripes that didn't affect my overall satisfaction and enjoyment.

In an interview, the author said he has always been fascinated by art and the artists, [quote] What is the nature of creativity? How do they come up with these ideas? Do they have a separate sort of vision? Are they people who deserve to have a different set of rules than the rest of us? [end quote] Who of us haven't entertained that discussion after an art gallery stroll and a few nibbles of cheese chased by copious glasses of free cheap Pinot? This book offers some exploration of that inquiry, but tilts that focus more toward whether or not that *different set of rules* translates to family and accountability. I believe Rachman gives us his answer as to whether or not *any people deserve a different set of rules than the rest of us* by serving up one of the tastiest and most satisfying dishes of revenge I've come across in a while. Subtle but with the slightest undertones of sarcasm, finishing with a bitter bite.

It's a satisfying, intelligently written novel that gifts a reader with avenues of possible mental meandering, and what more can you ask of an author than to trust his reader's and give them something excellent to chew on. BTW: *Can you separate an artist from their art? I can look at a Picasso (love doing so), but I can't watch House of Cards, I wouldn't eat a jello pudding pop with a gun against my head, and if the Pope kicked my dog, there would be a rumble. And, I would personally knit Ms. Gilot one of those dreadful but wonderful P*ssy Hats.

The characters and story were marvelous. The novel explores what it's like to be a narcissist and to love one, and for an introverted, artistic soul to look for human connection. The description of the contemporary art scene is scathing and hilarious. But, oh dear, the narrator's fake American accent was grating, which diminished my enjoyment. He could use the help of a dialect coach.

I need to sympathize with a character

I struggled. I may have missed the point. I kept waiting for the lesson, the love it was there but felt such a hidden afterthought. The one sympathetic character was left in the background. overlooked by the story and everyone in it.

The narrator enacted all sorts of voices for the various characters. In particular, I loved his rendition/interpretation of Pinch, the under-confident, angst ridden main character who devoted much of his life to trying to achieve approval from his self-important father. The world of professional artists, art galleries, etc. provides additional color to this delightful book.

Is Art the show or is the show the artist?

What makes an artist? "The Italian Teacher" displays an understanding of twentieth-century art and its demons. Is the desire to create art just an illusion, fantasy, dream, or a figment of one's imagination? Is art the show or is the artist the art?
In this book, the writer achieves a portrait of extreme vulnerability and realism: talent made irrelevant by the personality of the artist. Stripped of egotism, authenticity or genius, the artist's son forces us to face the deeply held fear of a life lived in vain.
Who cares? Now I'm depressed.

... finally obtained in final 1/3. Ending was satisfactory and left me sated. Content overall.

I really enjoyed this book. It is well written, but moves along quite quickly, spanning a full lifetime, while commenting on the relevance of legacy and the intrinsic value of art.