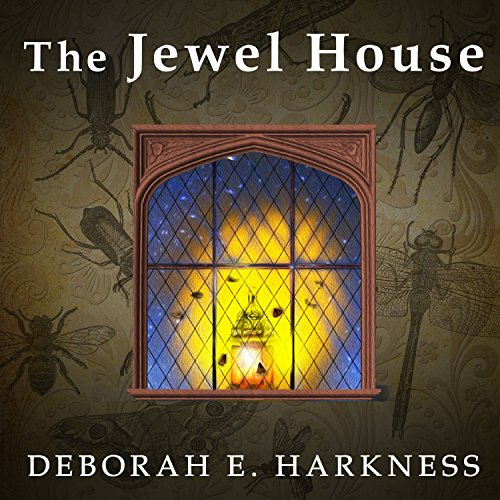 Written by: Deborah Harkness
Narrated by: Kate Reading
Try for $0.00

Best-selling author Deborah E. Harkness explores the streets, shops, back alleys, and gardens of Elizabethan London, where a boisterous and diverse group of men and women shared a keen interest in the study of nature. These assorted merchants, gardeners, barber-surgeons, midwives, instrument makers, mathematics teachers, engineers, alchemists, and other experimenters, she contends, formed a patchwork scientific community whose practices set the stage for the Scientific Revolution. It was their collaborative, yet often contentious, ethos that helped to develop the ideals of modern scientific research. The Jewel House examines six particularly fascinating episodes of scientific inquiry and dispute in 16th-century London, bringing to life the individuals involved and the challenges they faced. These men and women experimented and invented, argued and competed, waged wars in the press, and struggled to understand the complexities of the natural world. Together, their stories illuminate the blind alleys and surprising twists and turns taken as medieval philosophy gave way to the empirical, experimental culture that became a hallmark of the Scientific Revolution.

What listeners say about The Jewel House

Really wonderfully written history of Elizabethan London and the communities and networks that took part in creating a culture of science. This book is not a novel, if you were looking for that, but it is engaging, entertaining, and a enjoyable historical adventure through the streets of London with real people.

Should have read reviews first!

What would have made The Jewel House better?

I love Deborah's work!!! And this was a little different, yes, but the real sticking point for me on this is the narrator... MY GOD its painful to listen to this.... and I had an English boss for 10 years so its not just that I am unfamiliar with the accent and tone/inflection.. Its just her voice and her speech pattern. It seems forced, I found I was spending too much time trying to concentrate on not being bothered by the choppy and forceful speech to actually enjoy the story.. I actually got a headache. I really hope Jennifer Ikeda takes care of the next series or I am not sure I will be able to listen!!!!

If you’ve listened to books by Deborah E. Harkness before, how does this one compare?

This pales in comparison to the other works. Content and performance wise...

Would you be willing to try another one of Kate Reading’s performances?

This woman's voice drives me NUTS

I really was looking forward to this book. I like the author's fiction works and was interested in the subject matter. But Kate Reading's performance? NO. She e-nun-ci-ates every word so precisely, so precious, that I've started and stopped this book well over a dozen times. I may try it in print.

this is a boring book I would return it if Icould

this book is boring hasn't got a story to it, wish I could return it

I had listened to the other books by Deborah Harkness and expected more witchcraft stories. Although the history and background of the emergence of science in Elizabethan London was fascinating, I was really in the mood for a suspenseful story. This would be an excellent print companion to her other books as you're reading/listening to them.

Very hard to listen to this reader for more than a short time, material is great but the reader is very uninspiring. I found the material more to the scholarly reference book rather than a non-fiction novel. You can see from this material how Deborah was able to use it in creating the Discovery of Witches series of books.

Would you recommend The Jewel House to your friends? Why or why not?

I think that reading the actual hard copy would be better as you could easily skip from part to part as it moves you. Many sections could be quickly skimmed and other read in detail depending on your interests.

Would you be willing to try another one of Kate Reading’s performances?

Based on this book I would not seek out other books read by this reader.

Do you think The Jewel House needs a follow-up book? Why or why not?

This presents more like a reference book or a scholarly treatise, so unless Deborah has more research to present, this doesn't need any follow up.

Not an actual story. Super boring yet full of historical facts. Just couldn’t listen to it. The narration wasn’t great either.

Not My Cup of Tea!

I was hoping this book was more like The Discovery of Witches, yet I could not get pass the 3rd chapter. The narrator's voice is irritating to me. This book is Non Fiction in nature.

Not a bad book, but a misleading description

What was most disappointing about Deborah E. Harkness’s story?

This was not so much a "story" as it was a history book.

"A college lecture on the subject of "The Scientific Community of Historical London."

After reading Deborah Harkness series "All Souls" (which I LOVED) I expected this to be another historical fiction based in Elizabethan London which would have both an interesting story line, while also having factual components. I realize it is my fault for not doing more homework on the book, but this is not in fact the kind of book this is. It is truly a review of the "scientific" community of historical London. After reading the description I was expecting a story with multiple character viewpoints from different facets of the "scientific" community, how they interact with each other, and stories about their lives.

I was fairly disappointed as I was looking for a fiction, story-like book and this is more of a book of historical summaries. There is not truly a "story line" so there is nothing to truly get invested in as you listen. I liked the narrator but found my mind wandering a lot. This book is how I would picture a college lecture on the subject of "The Scientific Community of Historical London."

t was not a bad book, per say, it was just definitely not the type of book that I had expected.