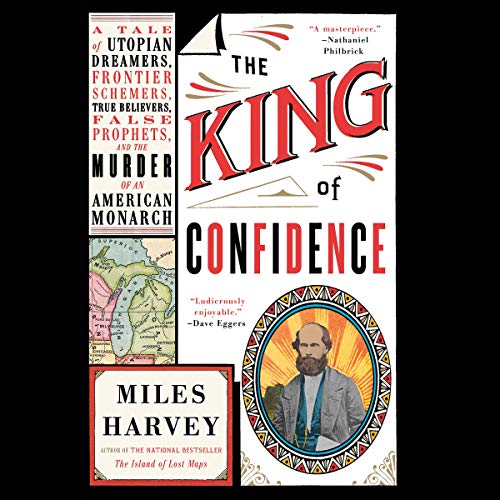 The King of Confidence

The King of Confidence

The "unputdownable" (Dave Eggers, National Book Award finalist) story of the most infamous American con man you've never heard of: James Strang, self-proclaimed divine king of earth, heaven, and an island in Lake Michigan, "[P]erfect for fans of The Devil in the White City" (Kirkus).

In the summer of 1843, James Strang, a charismatic young lawyer and avowed atheist, vanished from a rural town in New York. Months later he reappeared on the Midwestern frontier and converted to a burgeoning religious movement known as Mormonism. In the wake of the murder of the sect's leader, Joseph Smith, Strang unveiled a letter purportedly from the prophet naming him successor and persuaded hundreds of fellow converts to follow him to an island in Lake Michigan, where he declared himself a divine king.

From this stronghold he controlled a fourth of the state of Michigan, establishing a pirate colony where he practiced plural marriage and perpetrated thefts, corruption, and frauds of all kinds. Eventually, having run afoul of powerful enemies, including the American president, Strang was assassinated, an event that was front-page news across the country.

The King of Confidence tells this fascinating but largely forgotten story. Centering his narrative on this charlatan's turbulent 12 years in power, Miles Harvey gets to the root of a timeless American original: the confidence man. Full of adventure, bad behavior, and insight into a crucial period of antebellum history, The King of Confidence brings us a compulsively listenable account of one of the country's boldest con men and the boisterous era that allowed him to thrive.

"The story of James Strang - a messianic con man who wreaks havoc on an island community of his own devising - is amazing in itself. But it is the telling of the tale - think Herman Melville meets Mark Twain - that makes The King of Confidence a masterpiece. This book has talons that sink into you and won't let go." (Nathaniel Philbrick, New York Times best-selling author of In the Heart of the Sea and Mayflower)

"The King of Confidence is a ludicrously enjoyable, unputdownable read - a book with unsettling (but also weirdly comforting) parallels to our time. By illuminating this forgotten moment in American history, where a group of rational adults fell under the spell of a charismatic madman, Harvey reminds us of the endlessly repeating nature of history and humanity." (Dave Eggers, National Book Award finalist and New York Times best-selling author of Zeitoun and What Is the What)

"A spirited, entertaining read with a twist of insight and a tang of scandal.... Harvey has penned a tour de force of popular history." (Library Journal)

What listeners say about The King of Confidence

Foreword: I rarely am put off by florid language, mispronunciation or the like. And I would not wish upon anyone to discover the point in a book when the author's repetition of a single word becomes a deal-breaker. That being said, this author's maddening fixation on the word "antebellum" took on a life of its own. I counted over a dozen instances AFTER the point I thought it had become ridiculous. The problem is that, even though there are chapters that deal with John Brown, the expansion of slavery, and political party platforms, the word antebellum is almost never used in reference to anything to do with the Civil War. Among the things referred as common in the "antebellum" era are particular diseases, lead mining, stealing horses as a serious crime, newspapers use of wordplay for innuendo, Nathaniel Hawthorne's The Scarlet Letter, P.T. Barnum's bankruptcy, the quill feeding tube, the terms "spoil system","novelty hunters","celebrity fame" and songs which idealize a notion of home. Even if the story were compelling (it wasn't), this would have been massively distracting. Mid-19th century, the 1840s, the 1850s, early Victorian era in America, anything else! REVIEW: The subject of the book should have been more intriguing, in fact, that's why the book was chosen. It becomes clear that the author wishes to match the overblown contemporary rhetoric of newspaper stories and tall tales about the man and his legend. That's fine as it goes (notwithstanding the fixation on a particular word as noted above). But the lackluster storytelling and the hackneyed chapter titles, each starting "in which....." , essentially giving an overview of what's to come, never really fulfills the book's promise. There was probably a book half the size in the story, padded with various conmen and charlatans of the age, such as P.T. Barnum. The greatest flaw by the author, in my opinion, however, is I never really cared about the main character. This man, at once, manipulative, charismatic, bold, devious, perhaps mad.... sounds like someone to read about. But by the last third of the book, I was marking time and "antebellum"s. A book which deals with the broader subject of this book, but is much, much better, and is of much greater scope is "Fantasyland" by Kurt Andersen.

I had read plenty on Joseph Smith and Brigham Young, but I had never heard this story. It’s every bit as crazy and outrageous as Joseph Smith’s life—and overall, I was not disappointed. However, here’s my only forewarning: the author had the incredible annoying habit of repeating the description, “Antebellum era” and starting every chapter with “In Which...” Over the course of the book, this became nearly unbearable. How is it possible for editor(s) to miss this? Ugggh. Aside from this, the tale is quite amazing, and the author does a good job of contextualizing the the story within amide concurrent events of the time. Worth the time, if you can stomach some repetition.

I’m particularly impressed with the narrator - she places a nice dramatic emphasis on the grandiloquent pronouncements of the Prophet, but always steers clear of a hammy performance. Her midwestern accent also feels just right, and I think it’s nice that she wasn’t ruled out as a narrator just because the history in question is male-dominated. The text itself is also fascinating!

This book is both interesting history and serious scholarship. The author gives a detailed life of J. J. Strang and weaves into the narrative a picture of both Antebellum life and the rise of the confidence man as a figure in American culture. I finished this book about the man who came to my state, Michigan, to start his own kingdom on the day a plot to kidnap our Governor was foiled, and there were echoes of Strang’s defiance in the details of that conspiracy. We get a broad look at the context of “‘King James’” life through references to Walt Whitman, Nathaniel Hawthorne, Herman Melville, P. T. Barnum, Harriet Beecher Stowe, Frederick Douglas, and John Brown. Just as numerous as the literary and historical figures are the shady characters surrounding Strang, so pay attention. The narrator was great. Her inflection was spot on and always matched the meaning of the sentence, which doesn’t happen much in the thrillers I sometimes hear. She even managed to convey verbally the effect of block quotes. I definitely would look for other works read by her. I have nothing negative to note about this book and was both entertained and educated for hours by it.

deep dive into a wild American past

Story and overall: Here is my 5-star comment on "The King of Confidence" in Amazon: Miles Harvey's superbly researched "The King of Confidence" metamorphoses what might seem to be unpromising material--the sketchily documented life of a once nationally famous, paradoxical religious conman--into an examination of mid-nineteenth prophets and cults and their true believers. The history the book uncovers, focusing on an offshoot branch of Mormonism, is fascinating. There are enough twists and turns and action (sometimes violent) for a movie. But the best part, for me, is Harvey's analysis of the ideological roots of all this turbulence, including Manifest Destiny, the religious revival centered in New York's Burned Over District, and American and Mormon patriarchy. On the topic of Mormons, Harvey is scrupulously factual and more inclined to see the positive sides of his central figure's character than Brigham Young, his chief Mormon opponent, did. This central figure is the sometimes shadowy, always grandiose farmer's son, James Strang--a dreamer, swindler and occasional idealist. Harvey fills in the gaps in Strang's life through what one reviewer called his "pointillist" technique of contextualizing Strang in the history of his era and connecting him with better-known historical actors such as Abraham Lincoln, John Brown, Joseph Smith, P.T. Barnum, Nathaniel Hawthorne and Herman Melville. Yet "The King of Confidence" is far from being just a tale of charismatic men. We learn about Strang's wives, notably the cross-dressing Elvira Field/Charles Douglass, and their aspirations and disappointments in a time when they were legally subject to their husbands. Harvey illuminates their plight though the life and writings of their feminist contemporary, Margaret Fuller. "The King of Confidence" is, apart from its broad historical vision, an engagingly written book, worth reading for its tour de force Prologue alone. And most readers will shiver with recognition when they shift from Harvey's mid-nineteenth century America to our national present. Footnote: some of the repetitions in the book stem from historical repetitions and parallels, and the repeated chapter title format ("in which...") echoes nineteenth-century usage. Performance: Rengin Altay's midwest-accented reading is flawless and lets the text speak for itself.

An alternate view of history

Narrator was good, however the story left me wondering when and how it would end.

An entertaining and insightful book

This book is well written, well performed, and an insightful voyage into antebellum America. It is intriguing, entertaining, and keeps the reader engaged.

EXTRA EXTRA READ ALL ABOUT IT !!

I'm confident you will love this book!! So close to home and I had no idea.