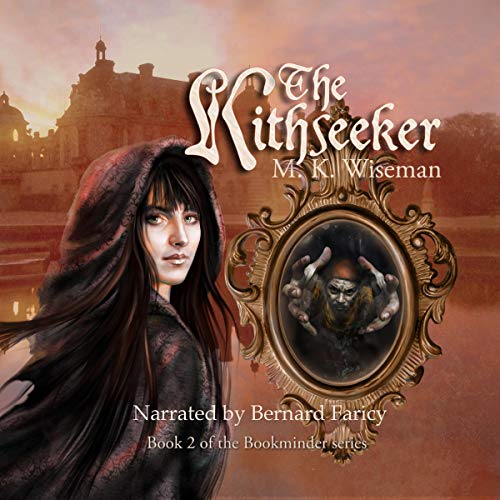 Written by: M.K. Wiseman
Narrated by: Bernard Faricy
Try for $0.00

Liara’s defense of the Wizard Nagarath has rendered Anisthe incantate - bereft of all magick - but even this has failed to guarantee Liara’s safety. The death of the war mage would seal Liara’s own fate, and so the wizard and his bookminder must keep him in their sites and yet as far away from themselves as possible.

With nothing but a storybook and a hunch, Anisthe has set off on a journey across Europe, aided by his half-fey manservant, in search of a legendary mirror that contains the most powerful magick ever known. Although the stuff of fairytales, the merest possibility of its truth embarks Nagarath and Liara on a race to discover the mirror before it falls into the hands of Nagarath’s lifelong foe. Both know should he lay claim to that power, Liara would be at the mercy of her father-in-magick and his lust for power, and not even Nagarath could save her.

Thus, the pair find themselves at the court of the Sun King, a world hostile to magick users, hopelessly surrounded by agents whose sole purpose is destroy them. Uncertain who is friend or foe, with Anisthe nipping at their heels, they must unearth the mirror before its evil is released, or worse, lays claim to Liara’s magick as well and brings doom upon them all.

What listeners say about The Kithseeker

So Much Fun! Need to be read in Order.

I really like this series a lot... Even though Liara kind of drives me a bit nuts at times you find yourself drawn in and liking, loving and hating each of the characters. The author does a great job keeping the pace up in the story, building enough depth in both the world and characters that I found it hard to put down. It does have it's slower more reflective parts but I personally liked the change, in many ways it made it feel more natural. These books do need to be read in order, they pick up pretty close to where the last book left off, there is a little bit of a recap given but not enough to make it an easy stand alone story. If you like good clean magic based fantasies then then is right up your alley. I can't wait to see what happens in the next!

Parents: PG- This is pretty clean, I don't remember any bad language, the violence is normal to mild fantasy levels and sexual content is minimal: attraction, flirtation and mild insinuations but not heavily part of the story.

The narrator does a great job, has good differentiation between characters, and is fun to listen to.

—I was given this free review copy audiobook at my request and have voluntarily left this review.

Race for a Magical Mirror

After his battle with Nagarath and Liara, Anisthe has decided to travel to France. It seems he is in possession of a magical mirror that is supposed to hold the magic of famed wizard Khariton. When Nagarath and Liara learn of this it becomes a race to get to the mirror first.

Along the way we also meet the third student that Nagarth and Anisthe trained with, Amsalla. She has a habit of being in the middle of everything and is the king’s wizard. She meets up with Nagarath and Liara and it’s clear that she wants to start some trouble between the two. She is also watching Anisthe but doesn’t realize that his assistant, Domagoj has got her in his sights too.

Everyone is trying to get to the mirror first and no one can be trusted. It feels like everyone is out to get each other and poor Liara doesn’t understand the fight she finds herself in. I feel bad for her but at the same time I understand how far she has come since her life in Dvigrad.

I liked this story better than the Bookminder because we started meeting more people and exploring the country. Amsalla just irritated me and there were times that I wanted to slap Nagarath upside the head for his actions/thoughts.

I’m curious to see how things are going to transpire in The Fatewreaker. Thank goodness I have everything ready to hop into it.

This book takes off right where the first one left off. I enjoyed the characters, elements of magic, and villians, as well as the action and historical elements. Definitely a book for both teens and adults alike. I didn't feel like it was too childish, and really loved the "soul searching" elements that took place. All together it was very enjoyable and I would recommend. I was given this novel in exchange for an honest review.