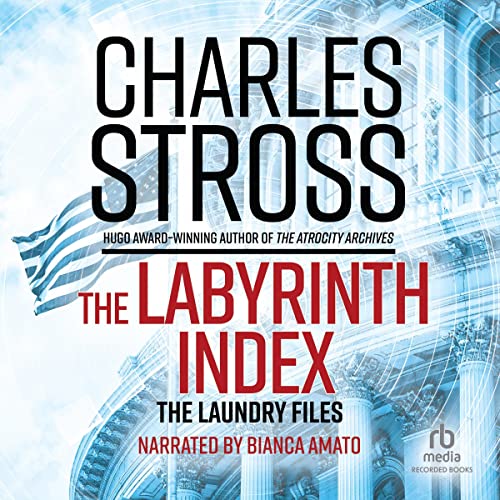 Written by: Charles Stross
Narrated by: Bianca Amato
Try for $0.00

The Lovecraftian Singularity has descended on the world, beginning an exciting new story arc in the Laundry Files series!

The arrival of vast, alien, inhuman intelligences reshaped the landscape for human affairs across the world, and the United Kingdom is no exception. Things have changed in Britain since the dread elder god Nyarlathotep ascended to the rank of prime minister. Mhari Murphy, recently elevated to the House of Lords and head of the Lords Select Committee on Sanguinary Affairs (think vampires), finds herself in direct consultation with the Creeping Chaos, who directs her to lead a team of disgraced Laundry personnel into the dark heart of America. It seems the Creeping Chaos is concerned about foreign relations.

A thousand-mile-wide storm system has blanketed the Midwest, and the president is nowhere to be found. In fact, for reasons unknown, the people of America are forgetting the executive branch ever existed. The government has been infiltrated by the shadowy Black Chamber, and the Pentagon and NASA have been refocused on the problem of summoning Cthulhu. Somewhere, the Secret Service battles to stay awake, to remind the president who he is, and to stay one step ahead of the vampiric dragnet searching for him.

What listeners say about The Labyrinth Index

just not as engaging

this was my least favourite in the series thus far. It wasn't bad per se, it just wasn't as entertaining or, as the headline says, as engaging - it was missing some of the humour I think. It was there at the beginning but it shifted darker early on and stayed there...

I am a big fan of The Laundry files and have listened to all of the preceding novels, some several times. And I needed every bit of that context to keep the story from squirming away from me. On the downside, my familiarity with the previous installments prevented me from enjoying it as much as I would have liked.

First, while Ms. Amato turns in a journeyperson performance as the voice of the story, she's not the voice that I had in my head for Mhary Murphy (and while we're on that subject what the blanking blank happened to her first name here?). Amusingly, at one point she pronounces .357 (as in ammunition) as "three hundred fifty-seven" - ho, ho. Same deal for Interstate 144 (as pronounced, One Four Four). These are production issues, and sadly not the first ones that I've heard in the Laundry series. "Down on the Farm" sounded like it was recorded in the back of a 1962 Vauxhall. My more general problem is Mhary is not a particularly likable character. Her personality doesn't even harmonize with her previous appearances. Mr. Stross has saddled her with a ludicrously trashy mouth, worthy of Scott Glenn's character in Off Limits (a psycho Colonel in Vietnam). Irritating.

Other issues: Just when Mhary is feeling the need to feed, a Starbucks barista jumps from behind the counter and, displaying all the character development of a Charles Bronson villain, reveals himself as a sexual predator. Looks like blood is back on the menu, boys! That's what's known in the business as lazy writing. I also question the premise of an autistic member of the Alfar in the Laundry Files universe.

Overall, The Labyrinth Index is enjoyable, but burdened by too many characters and narrative jumps between action taking place in the story-line's present and it's past.

Hours of self pitying exposition.

Stross manages to take an excellent plot and turn it into a whiny TLDR Facebook post. Main character is unlikeable, unpleasant and selfish. We already have one George R R Martin. Thanks but no thanks. Laundry Files takes the same bad turn as Iron Druid series did a few years ago. More horror less complaining next time please.

An author this popular should be able to afford either multiple narrators or one that knows how to do multiple voices. Shifts of scene and character are impossible to follow. Story might be good but who knows.

this reader should be narrating Mary Poppins or technical specifications. either would be less demanding.

I'm glad the reader has a British accent. My only criticism is her limited range of American accents — we've got slightly British southerner, slightly British midwesterner, and slightly British dork. But no matter. Stross keeps getting better with his Laundry series. I think he writes traumatized characters very well — he's sympathetic and humane. Plus, he's a former computer programmer. The best.

I found it quite enjoyable. The first story from Mhari's perspective. The only minor annoyance was the narrator read the 10^9 sacrifices to wake Cthulhu as "one hundred and nine" and not the "one billion" it deserved.

This series is a freight train on a downhill slope with no brakes. Mary Murphy is back with her new boy toy, and this time she's taking Manhattan. What about Bob? Alex? Mo? Just have to read to get updates on them.

This stars Mari, a vampire woman, now a baroness high up in the laundry. At this point, people world-wide have begun to understand that stuff like magic, superheros and vampires exist, and the book is a secret battle between the Nazgul and the Laundry. Problem is, a lot of the action seems contrived and confusing. I liked it better when the books were about Bob Howard, a much more accessible character.

She doesn't have the "character" I so love in his other novels though I do understand that Bob must move on.

This book really put Mauri into perspective. I was kinda iffy on her before this book. Felt the same after the first few chapters but I have more respect and admiration for her now.

Great story but I miss Bob

Charles Stross weaves an entertaining tale with unexpected twists based with formerly minor characters in the staring roles, and pulls it of well, but I still miss Bob :)