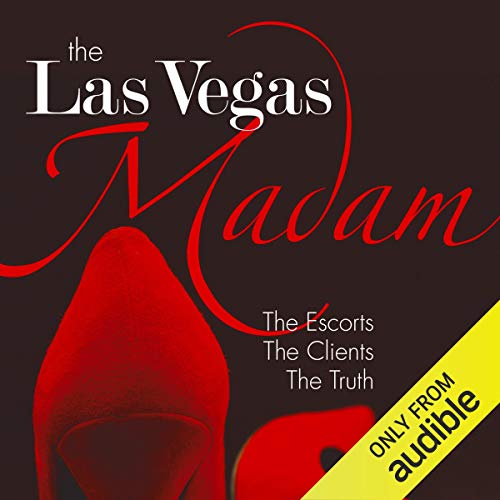 The Las Vegas Madam: The Escorts, the Clients, the Truth takes you inside the life of a call girl as she spirals into a world of glamour and secrets and expose.

When a scandalous news story splashed across mainstream media about an elite escort agency in Las Vegas, people were shocked to learn there was a tiny mastermind behind the company: a small town girl from Oregon named Jami Rodman who went by the pseudonym Haley Heston.

Meet the secret society of high-end escorts and the men who hire them.

Discover the highly lucrative business of sex as Rodman reveals the hidden websites and layers of complex networking to satisfy man's endless desire for sex.

Timed with the 2007 collapse, Vegas cultivated a new, unprecedented class of call girls...ones with brains, beauty and savvy. Together with her agency, they cleaned up the soiled reputation of prostitution in Las Vegas.

Weathering competition from desperate, violent, and successful pimps and madams, hosting swanky parties, and serving clients in cities that spanned the globe, her agency ruled the oldest profession for several years until one of her star escorts, Olympian Suzy Favor Hamilton, canceled on a jealous and disgruntled client...he wrote an email at 2 AM to the online Smoking Gun. Haley Heston, the Las Vegas Madam, was outed.

The Las Vegas Madam is a provocative memoir of one girl's journey into prostitution and how quickly a fast-paced life built a wedge between her and the very thing she was seeking to begin with love, friendship and meaning. She replaces loneliness with companionship, both as a hired prostitute and recreationally.

What listeners say about The Las Vegas Madam

Where is she now?

What a crazy life story for Jami.....I wish there was an update to find out where she is in her life now.

This story was absolutely fascinating! I listened to the entire book on a road trip and was captivated from start to end. The author accurately describes many aspects of an escort’s life. #Audible1

I didn't know much about the author or her story prior to listening, but I was intrigued. I couldn't stop listening. If you are not a fan of very explicit sexual details, this probably isn't for you. I felt like I really got to know Jami and I felt for her. I enjoyed it.

This is the truth as told by Jami Rodman about her Vegas life as a call girl turned Madam. I found this book interesting, graphic (not too bad), but not exciting. I was intrigued to listen to entire book though. It is as interesting as any biography would be and I liked it as a book. I never realized how much work went into being a call girl (prostitute), nor did I realize just how dangerous and competitive it is. This book is a real eye opener. I also feel this book is a must read by any young person who thinks he/she can run away from home and make it on their own. Definitely food for thought.

The author, Jami Rodman did a wonderful job writing this book. The courage it had to take to put it all in print for 1) To let people know & 2) To tell the truth for those close to her is amazing (just my opinion). Ms Rodman turned the oldest profession into a science. The narrator, Teri Schnaubelt delivers a flawless reading to us with many different voice, accents and so on. Good job ladies!

I received this audio book as a gift in exchange for a honest review.

If you could sum up The Las Vegas Madam in three words, what would they be?

Oh Wow..there was a lot I liked about this story...it wasn't sugar coated...it was accurate...This is my first memoir, I am usually a fiction fan...this reads like fiction ans was quite enjoyable...Jami was very brave to tell this story...and I commend Teri for being her voice..they both did an excellent job!

This whole book moved me...I am very familiar with this subject...I know how this business affects people, both the good and the bad...I saw Jami's journey as Haley going from good to bad in cycles..both as an escort and madam...I wanted to almost reach into this book and help her...to stop her at certain points...and I am so proud she came out ok...I like how she said, I am STILL a good person...because she IS!

Oh what a journey this book was for me, I sit here a little choked up, because I know what Jami went through, and I am so so proud and relieved for her! This is a very accurate and good retelling of this lifestyle...Teri did an EXCELLENT JOB, and she had GREAT material to work with...This is my first memoir, and I loved it...I will be looking into listening to more, and would appreciate some recommends...If you are hesitant about this story, dont be..its so well worth your time...I could not put it down and HIGHLY RECOMMEND!

One last thing..DO NOT Listen to this book with the intention of judging these women...This is the oldest profession out there..and it's difficult and very personal... it is also a very large part of our society, listen with an open mind please! THANK YOU!

I loved this audio book, the story that it told was fascinating and I couldn't stop listening to it. I love how she talked about her experiences, the inclusion of other prostitutes , and how prostitution affected their lives.

Very Graphic-Performance & Backstory Kept Me From*

*Very Graphic- The Performance & Backstory Kept Me From Shutting It Off*

Jamie comes from a small town in Oregon. She discovers her sexuality at a very young age and pursues it by herself, then with friends and finally boyfriends. She married 18 and headed to Las Vegas. Once there she discovers the world of prostitutes, escorts, etc.

This book is very, very graphic. It is probably one of the most descriptive and [again] graphic books I have ever listened to. Had **I not agreed to listen in exchange for a review** I probably would've shut it off after the few first chapters.

The redeeming factor for me was not what Jamie did [in her way to toward earning her living] as a call girl but her business sense behind her decisions. It was fascinating to hear her approach and reasoning from being any of the above to a profitable career doing none of those activities.

Teri Schnaubelt, again, is perfection. I have narrowed my top two favorite female performers and Teri is one of them. She is able to choose stories that are interesting and worth listening to, even if the listener doesn't recognize it right away. Spot on in all, performance and characters.

Notes: Graphic descriptions of sex in any manner or form you can imagine. Strong language

This would not be rate able as a movie for a theater. I would imagine that it would be X-rated.

I enjoy leaving reviews, as I know that I read them the reviews of others before I purchase a book. If you found my review helpful in your decision about this book, would you please select yes directly below this paragraph? Thank you so much.

Please consider "following me" here on Audible.com. I purchased a lot of books by authors that I am faithful to. I also have the opportunity to review books in all genres, many that I would not pick up on my own. I have been pleasantly surprised by new authors and narrators. Thanks!

Authors/narrators, feel free to use my review to promote this book on Twitter, Facebook, etc. Please link it back here.

Story moved along at a good pace..

Interesting and fun stories. If explanation of graphic sex upsets you, move along. But if you find raw, true stories of the oldest profession, interesting, it's a keeper..

Where does The Las Vegas Madam rank among all the audiobooks you’ve listened to so far?

What other book might you compare The Las Vegas Madam to and why?

I don't usually listen to books of a sexual nature so I was surprised I wanted to listen to this book.

There isn't one particular scene that stands out. I do like that she helped a lot of women especially after everything came down around her.

No it was too long. I did find it hard to put down.

I'm glad that I listened to her story.

This audiobook was provided by the author, narrator, or publisher at no cost in exchange for an unbiased review courtesy of AudiobookBlast

I couldn't stop listening. It was very graphic which at first so thought was a bit much. Yet upon further listening, to really understand the full picture of what goes on in "that world", the graphic depiction must be included.

What made the experience of listening to The Las Vegas Madam the most enjoyable?

Excellent tell all of the oldest profession in the world

As a former escort, this book was told in a beautiful way that only few will completely understand. Great listen.