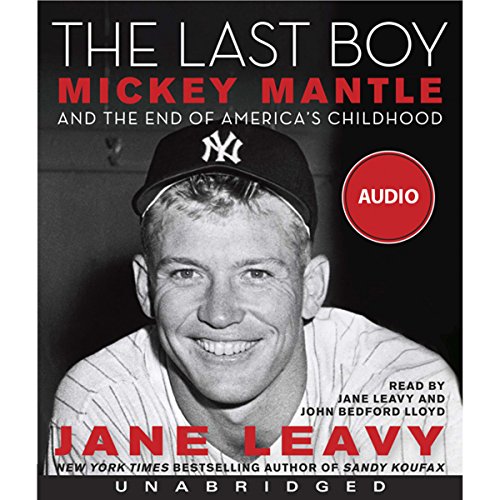 Jane Leavy, the acclaimed author of the New York Times best seller Sandy Koufax: A Lefty's Legacy, returns with a biography of an American original: number 7, Mickey Mantle. Drawing on more than 500 interviews with friends and family, teammates, and opponents, she delivers the definitive account of Mantle's life, mining the mythology of The Mick for the true story of a luminous and illustrious talent with an achingly damaged soul.

Meticulously reported and elegantly written, The Last Boy is a baseball tapestry that weaves together episodes from the author's weekend with The Mick in Atlantic City, where she interviewed her hero in 1983, after he was banned from baseball, with reminiscences from friends and family of the boy from Commerce, Oklahoma, who would lead the Yankees to seven world championships, be voted the American League's Most Valuable Player three times, win the Triple Crown in 1956, and duel teammate Roger Maris for Babe Ruth's home run crown in the summer of 1961 - the same boy who would never grow up.

As she did so memorably in her biography of Sandy Koufax, Jane Leavy transcends the hyperbole of hero worship to reveal the man behind the coast-to-coast smile, who grappled with a wrenching childhood, crippling injuries, and a genetic predisposition to alcoholism. In The Last Boy she chronicles her search to find out more about the person he was and, given what she discovers, to explain his mystifying hold on a generation of baseball fans, who were seduced by that lopsided, gap-toothed grin. It is an uncommon biography, with literary overtones: not only a portrait of an icon, but an investigation of memory itself.

"I believe in memory, not memorabilia," Leavy writes in her preface. But in The Last Boy, she discovers that what we remember of our heroes - and even what they remember of themselves - is only where the story begins.

The Man Behind the Myth

When I was 12, I became a Yankee fan and caught the tail end of Mickey Mantle's career. I knew of him as one of the greats, but was also aware he had many flaws. This book tells the story of a man who had the potential to be the best and seemed to have it all - but due to circumstances never lived up to this true potential. This is not a baseball story, but the story of a tragic hero who never really understood why people liked him so much.

Exceptional - a real must read for baseball fans

And a real must read for those of us who came of age in the era of "The Micks" pivotal years. I appreciate that Jane Leavy didn't glorify Mantle in her book-she wrote the truth-both the good and the terrible, the heartbreak of a man who's body was worn down by the sport he loved and who finally found himself - the real Mickey Mantle.

I grew up in a Dodger family..my parents were from New York, transplants to Los Angeles in the 40s....we listened to baseball all spring and summer-didn't matter who was playing-our big multi band radio was tuned in to a baseball game. When the Yankees played USC pre season in 1951, my dad had 2 tickets and I got to go..I saw the home run that was the start of Mantles baseball life and I got an autograph in my pink autograph book..and as an awkward 11 year old girl with her own mitt, I never forgot the way he smiled at me and said "Girls can't play baseball!". I developed my first crush...Mickey was it for me. Rooting for the Yankees was as bad as it could be in my family but I spent the next 35 years following my hero.

This book is great for those of us who never saw the dark side of Mickey Mantle and for baseball fans who didn't experience the game when it was played for fun-before the big salaries and bonuses, when kids played until dark on vacant lots or at school yards.

The writing and story and wonderfully done, though I wasn't really impressed with the narration. Still, like all personal histories it's about the person. This book is better than the several other Mantle books I've written-it's honest and doesn't glorify Mantles bad disposition or sexist ways-things that were never printed in newspapers back then. There was a protection of sorts around sports heroes and politics in the middle years of the country.

A must hear for sports fans of any era.

What a life. Drop the drawl.

A fascinating, unflinching biography. Jane Leavy takes on the life story of a childhood hero (hers and millions of others) and does him the honor of telling the truth. Paradoxically, by demystifying The Mick, she succeeds in bringing us closer to him, by helping us understand his frailties and humanity. This is a great biography -- the Mick's story for grown ups.

The two voices in the Audible version -- hers for an introduction and the recounting of a weekend-long interview, his for chapters recounting Mantle's life -- works well. My only complaint is John Bedford Lloyd's choosing to speak all of the quotations attributed to Mantle in a faux country drawl. So what if Mantle spoke with a drawl. The insistence of calling attention to it persistently comes off as patronizing, almost ridiculing. Is Mantle the only person quoted in this whole book who spoke with an accent? The voice attributed to Mantle is a major distraction and, for me, a significant flaw in this Audible version.

Still, Jane Leavy's thorough research and excellent writing make this book well worth listening to, even with the drawl.

Leavy provides a personal and well researched insight into the Mick. She also provides a very interesting insight into the culture of the 50's and 60's which allows the reader to better understand why Mantle was personally out of control. A very well written biography of the painful inner truth of a great baseball hero.

An American story well told. Hard to hear disturbing details of a childhood hero, but in some ways I appreciate the Mick even more. The book evokes sympathy, laughter, and a tear or two. I feel like I understand him better. Great combination of baseball and life. Baseball fans will enjoy it, and students of human nature and family dynamics will gain from it too.

Yes. It is a great listen (read) if you like sports especially baseball.

What was one of the most memorable moments of The Last Boy?

Have you listened to any of Jane Leavy and John Bedford Lloyd ’s other performances before? How does this one compare?

It was very sad at the end.

There were no punches pulled in this book.

The organization of the book's material wasnt my cup of tea. A bit jumpy at times. and especially the inserts of the author's interview with Mantle through the book didnt sit well with me.

I didn't realize what a legend Mickey Mantle was.

For someone who didn't grow up in Mantle's baseball era I thoroughly enjoyed this book. I learned so much about how the game was played back then and about Mantle himself. thank you for writing this book. I was sad when it ended.

Would you consider the audio edition of The Last Boy to be better than the print version?

Yes, the narration adds special quality to the early deterioration of Mick's New Yankee baseball skills and painful retirement years due to alcoholism

How his father's early death and the pressures of being the greatest Yankee of his generation drove him to lifelong alcoholism and many covert years in Alcoholic Anonymous.

Which character – as performed by Jane Leavy and John Bedford Lloyd – was your favorite?

Mantle is a belived, gentle and deeply sad Peter Pan prototype with a huge national following of devoted fans. In his decline, Mantle cried after lost games in the clubhouse if he thought he failed team. Roger Maris cried with him when he confessed his addiction.

Mantle's blaming his father for his demons while in AA.

So sad how Mick died similar to Babe Ruth's self induced demise.