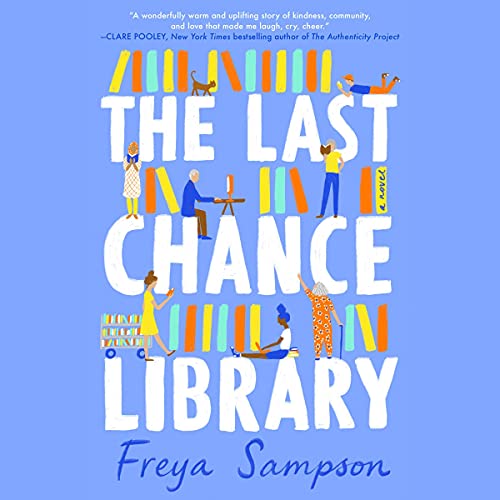 Written by: Freya Sampson
Narrated by: Nathalie Pownall
Try for $0.00

June Jones emerges from her shell to fight for her beloved local library, and through the efforts and support of an eclectic group of library patrons, she discovers life-changing friendships along the way.

Lonely librarian June Jones has never left the sleepy English village where she grew up. Shy and reclusive, the 30-year-old would rather spend her time buried in books than venture out into the world. But when her library is threatened with closure, June is forced to emerge from behind the shelves to save the heart of her community and the place that holds the dearest memories of her mother.

Joining a band of eccentric yet dedicated locals in a campaign to keep the library, June opens herself up to other people for the first time since her mother died. It just so happens that her old school friend Alex Chen is back in town and willing to lend a helping hand. The kindhearted lawyer's feelings for her are obvious to everyone but June, who won't believe that anyone could ever care for her in that way.

To save the place and the books that mean so much to her, June must finally make some changes to her life. For once, she's determined not to go down without a fight. And maybe, in fighting for her cherished library, June can save herself, too.

“A wonderfully warm and uplifting story of kindness, community, and love that made me laugh, cry, cheer.” (Clare Pooley, New York Times best-selling author of The Authenticity Project)

"The Last Chance Library is a heart-squeezing and charming story about grief, love and the power of community. An absolute delight.” (USA Today best-selling author Colleen Oakley)

"The Last Chance Library is absolutely irresistible! Curl up and indulge in Freya Sampson’s charming novel about a shy librarian in a small town with a great cause. You’ll have such a good time and you'll love the unexpected twist at the end!” (New York Times best-selling author Nancy Thayer)

What listeners say about The Last Chance Library

Such an empowering story. Shows there is always room to improve yourself and be the person you’ve always wanted to be. It’s never too late. Highly recommend. Great narration too!

Lovely story about regular folks leading a simple kind of life and gathering strength from each other to fight for their small community.

This is a lovely story. The characters are wonderful. Very enjoyable listen. You won’t be disappointed.

A charming book, well interpreted by the narrator. In a world that values flamboyance, an exploration of the experience of social anxiety is very welcome. Some of the tropes are a bit formulaic—the sudden inheritance, the devious developers, the salty octogenarian—by they are bearable in the company of the rest of the characters and the hovering presence of so many books. A feel-good listen!

a cute story for easy listening. there were moments i found predictable but overall it was still a good read

verywell written, author pulls you in to care about a local library people' lives .

Only got to chapter six and was tired of the pitiful main character. Perhaps she grows a backbone later in the book. Also - who cares about acoustics in a library?

A sweet story about a colorful cast of characters trying to save a library from closure, for an easy, light reading experience.

I listened to ten out of the 38 chapters and decided I couldn’t take any more. The woman has done nothing in life because she is too afraid. First, it described in detail how she keeps everything in her house and life exactly as her dead mother had it. I thought that could happen due to grief. But then it goes on and on about how when she was eleven a friend dumped her so she never made friends after that. I don’t think that is realistic. Plus, this book is too depressing and definitely not the sweet, fun, romp that it was advertised to be.

This story took me a while to get into because it is slow going for a while. Overall a cute, light read, which I enjoyed.