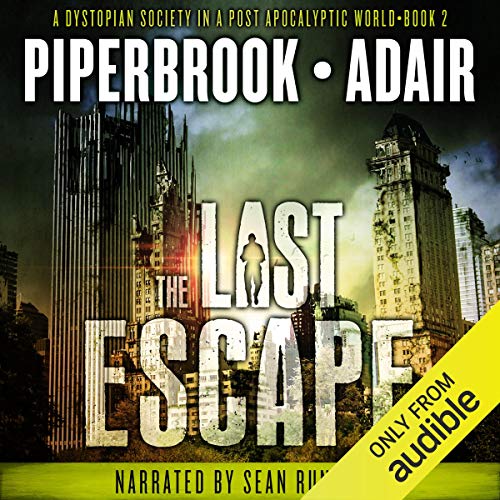 The Last Escape: A Dystopian Society in a Post Apocalyptic World

The Last Escape: A Dystopian Society in a Post Apocalyptic World

Part 2 of The Last Survivors Series

They were dead. All of them.

In the wake of a massacre, Ella, Bray, and William flee into the wild, hoping to escape the brutal vengeance of an unforgiving leader. In Brighton, political and economic tensions boil. Famine is approaching. The monsters are amassing.

And a costly decision must be made, one that will threaten the lives of humanity's last survivors...

What listeners say about The Last Escape: A Dystopian Society in a Post Apocalyptic World

I found this world in the last survivor series to be very engaging. I here the negative comments about how things are portrayed and at the start of the book, the author gives his 2 cents on the portrayal of women in the story. Maybe it's just me but I think those objecting are being two harsh and many stories fictional and really non-fictional show some pretty horrible treatment of women and the human race overall. The story itself moves forwards and Sean Runnette is one of, it not the best narrator on Audible, which is how I found this series. I like the take on the disease that afflicts people in the story and hope to learn more about it in future books

Game of Thrones "lite" Vibe from this series.

Where does The Last Escape: A Dystopian Society in a Post Apocalyptic World rank among all the audiobooks you’ve listened to so far?

What was one of the most memorable moments of The Last Escape: A Dystopian Society in a Post Apocalyptic World?

I am binge reading so all books are meshing into one epic saga.

If you could rename The Last Escape: A Dystopian Society in a Post Apocalyptic World, what would you call it?

I was drawn in by the zombie carrot but these "infected" are not the only selling point of the story. There is a Game of Thrones type political scramble where everyone thinks they would be a better leader and are plotting against each other as things go to heck. Although it is not nearly as complex as GOT, the authors are obviously learning to work together the characters are developing nicely and the plots are getting more complex and intertwined.

I am really enjoying this series. I find it amusing that so much information could be lost in a future society. I love that in such a male driven & ruled world we have a couple of strong defiant women. The story is completely original yet can remind me of other series at times too.
I am eager to find out what the fate of each character is. Starting the next one tomorrow.
The narrator is really good and I would listen to more by him if given a chance.

I couldn't put this book down! I felt as if I myself was in the story. I absolutely love Sean Runette as well!

Unfortunately, I couldn't finish the book

It was a struggle to get through book 1. The only reason I did, was because of the narrator. Unfortunately, he couldn't save this book. The very last line of book one, about Ella's daughter, was the reason I decided to try book 2. I'm 5 hours & 30 minutes into the book and that's still as much as I know. She's got a daughter. We haven't met her, don't know what she looks like, etc.
Every time there's a good part of the book, a likable character, a part that I'm really into and want to listen to more.......the authors have to ruin it by being cruel to this character. The treatment towards women in the first book was over the top, and it's gotten no better in this one. It's actually worse, with informing us that women in the "house of barren women" are SOLD when they're too old to satisfy men, most often to men who enjoy doing cruel things to women. There's also a flashback to a rape scene. It's a flashback......you could have just said that she was raped, we don't need to know details about said rape and how it's common place for 13 YEAR OLD girls to be raped.
There's backstory of a character and his 3 wives, all of which were "barren" because it's never the man's fault. 2 were sent to the house of barren women and the 3rd was of course, burned alive in the pire, after being beaten for the past year.
There's a woman in the barren house that I really want to hear more about, but unfortunately, during her scenes, there's more cruelty. She's saving her money, but it's illegal for her to have money and of course, there's always someone more powerful there to take it away. At hour 5 of the book, the cruelty to this woman made me quit the book. I was done and not listening to anymore.
Then I decided to give the book another try. I really would like to hear more about Ella, William and Bray, something that's majorly lacking in this book. I could only make it 30 more minutes into the book before I quit it for good. Another storyline that I love, Ivory and his teacher. Everything is going great for Ivory, but then the authors have to bring a priest into it, which of course you know if you've read book one, the priest takes it all away. Yet another great character, brought down by a powerful character. And after the priest sells Ivory's valuables, he hires another bad guy to do something. I can see where this is going. The teacher, who's name I can't remember right now, that has the most interesting story of the entire series, will end up having something cruel done to him.
If this were the end of the series, I could finish this book. But with there being at least 3 more in the series, there's no way that I can find it in me to go any further. I'm done. Knowing what happens to William just isn't worth it.

Even with the preface...this books incessant misogyny gets a little old after a while.

I manually tag the first book, and thought I'd try audible for the second. I really enjoy the story, but the narrator's voice wore on me through the last chapters. I'm sure this is a matter of preference though. Would recommend.

I very much enjoy the aspect of how these two take on religion and science. I don't understand how people decide that religion is superstition though, it feels like they are reaching into our time and pulling out our knowledge of science and applying it to people who would know nothing beyond what they are told. Especially those who have never seen a book, much less be able to read one if they saw it. Overall though I enjoy the book and I enjoy seeing how these two view political and religious tensions.