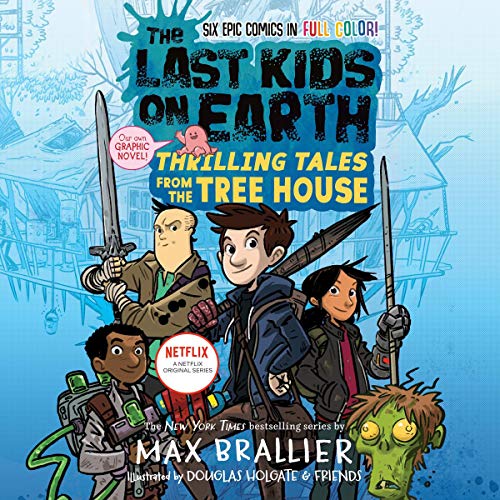 The Last Kids on Earth: Thrilling Tales from the Tree House

The first ever graphic novel in the New York Times best-selling The Last Kids on Earth series - now adapted for audio!

The kids and their monster buddies are hanging out in the tree house, when Jack launches into an epic, totally-heroic, super-rad story of one of his many post-apocalyptic adventures. Of course, after he's finished, everyone's eager to one-up his tale with a story of their own. Soon, Quint, Dirk, June, and Skaelka, and even Globlet regale the group with sometimes outrageous, often hilarious details of their action-packed escapades during the monster-zombie apocalypse. Their stories are capped off by a special double-length feature which will finally reveal the mysterious whereabouts of two villainous villains to prep listeners for the seventh book in the series coming Fall 2021!

What listeners say about The Last Kids on Earth: Thrilling Tales from the Tree House

My 8 year old was feeling sick on our long road trip looking at his tablet. We had read the first Last Kids on Earth together and I suggested this to him. He was unsure at first but now I think he’s an audiobook lover for life! Great job with production because this book saved us from some uncomfortable driving hours.